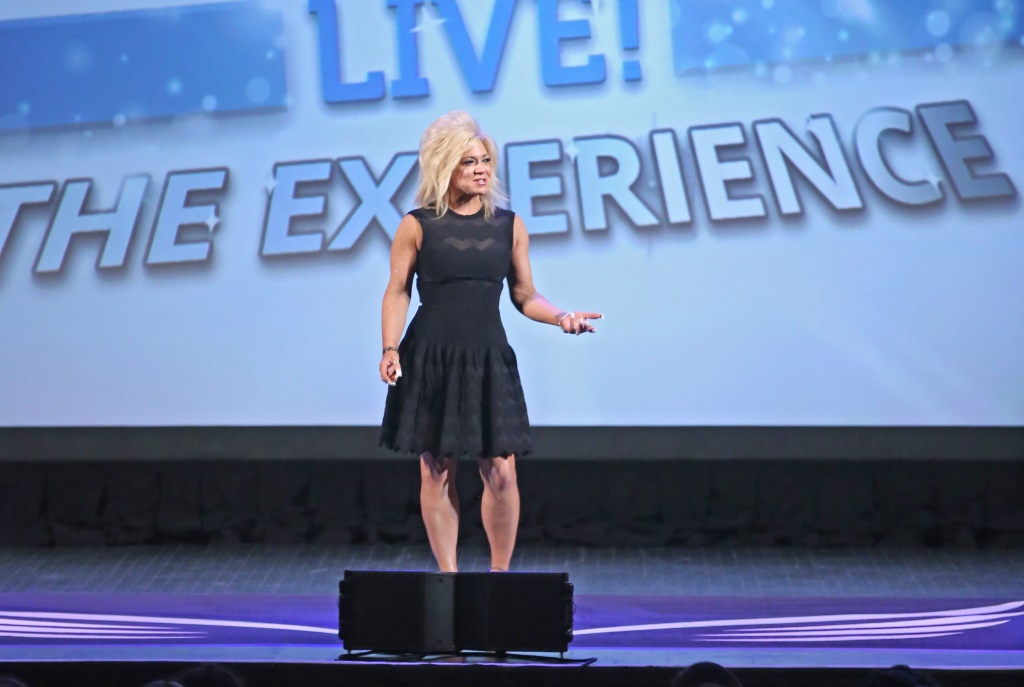 The diminutive blonde with big hair from Long Island came to Milwaukee, delivered a hell of a show, evoked tears and laughter, and even kicked some ass in the process.

“Theresa Caputo Live! The Experience,” hit the Riverside on Saturday. The “live” part of the title is a true bit of irony as the woman makes her living speaking to the dead.

Caputo communicates with the grateful dead on TLC’s “Long Island Medium,” which recently began its sixth season. Caputo, dressed in a little black dress that accentuated her dome of blonde hair, delivered two strong hours of readings and discourse to a nearly sold old out and devoted audience.

“I’m not asking anyone to believe what I do,” Caputo told the audience in a five-minute monologue. “After 13 years, I still don’t understand it.”

Whether or not Caputo truly can channel the dead will always be up for debate, but that doesn’t diminish the fact the woman delivered a heck of a compelling two-hour show—even for the unbelievers.

Some of the most diehard fans came to the show after a book signing earlier in the afternoon for, Good Grief, Heal Your Soul, Honor Your Loved Ones, and Learn to Live Again at Boswell Books on Downer Avenue.

“I’m just a vessel your loved ones are going to use for the two hours,” Caputo explained.

Back home in Hicksville, N.Y., Caputo is a wife and mother who just happens to be a psychic medium who channels spirits of the dead, or so she claims, which is how producers at TLC became interested in her.

Caputo’s message was one of reassurance and comfort, insisting the departed passed because it truly was their time while promising that loved ones were in a better place.

“All they want us to know is they’re at peace, and they’re OK,” Caputo said.

No doubt, a few in the audience were skeptics dragged along by believers, and Caputo made no promises or predictions, nor did she take questions from the audience. That was made crystal clear from the beginning.

“Spirits are coming through me,” she insisted. “If you want them to say this or that, I guarantee it won’t work. These are messages the spirit believes we need, not necessarily what we want to hear.”

What the audience heard reduced many to tears, and I wasn’t far off in a few instances. 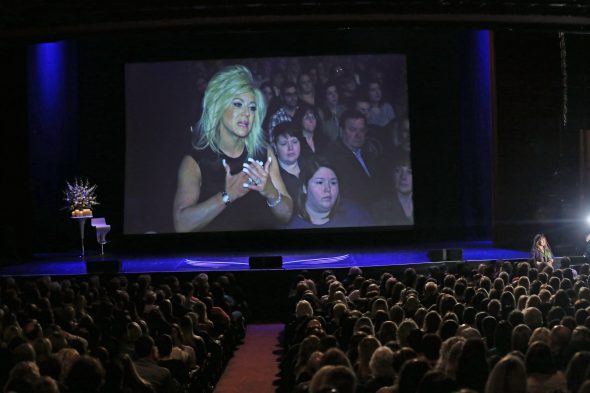 After her introductory remarks Caputo took to the audience, working the aisles like a seasoned performer. The small camera crew followed her, getting a shot of both Caputo and a second of the person receiving the reading. All this was put up on a gigantic screen that took up the entire back of the stage.

At one point in the show, Caputo was on a true mission from god. She was hell-bent on finding a specific person, the mother of a young girl that was brutally murdered. After asking where this person was, she was called to the balcony. If you’ve been to the Riverside, you know this is quite a trek and it took a few minutes for Caputo and her camera crew to get up there.

(Incidentally, this is where I was sitting. Tickets were at a premium and Caputo said for some of her shows tickets have gone as high as three grand. Higher-priced seats were gobbled up early, presumably by fans hoping to be picked for a reading.)

She took a breather when she arrived upstairs, then resumed her search. Again she said she was looking for a mother of a slain daughter. A few people in the audience seemed to want to get her attention, but she targeted a couple of women and headed toward them. Enroute she explained a bit more of what she was looking for. One of the women shouted, “why didn’t you say so in the first place?”

“Who said that?” Caputo bellowed. The women called out to Caputo to “dig deeper.” This really set her off. Caputo called security to have the women escorted out, and they immediately did as they were instructed. Caputo explained she was being “inhabited” by a spirit that was killed by an abusive boyfriend and said there was blood coming from her own mouth. Now, if this was made up, she’s a heck of an actor. She truly sold it. Later, Caputo said she’d never kicked anyone out of a show before, and she felt badly about it, but these were tormenting things happening to her at the hands of the spirit, and she doesn’t take it lightly.

It turned out the woman she was looking for was on the main level and Caputo had made the journey for naught.

In another instance, Caputo spoke with two women sitting a few rows apart, both losing children to untimely and essentially preventable deaths. In another area of the theater this happened again, only in this instance, both young men drowned. One died after hitting his head on a rock while river rafting, the other after falling to sleep in the bathtub, presumably after intoxication. To be clear, it was rather astonishing she nailed both of the scenarios. I’ll leave it to you to decide whether they were audience plants, as some of her critics have suggested.

To a charming and distraught older woman whose daughter was killed, Caputo said, “she’s sorry you had to find her this way. One thing she wants you to know. You were an amazing mother.” This is where it gets tricky. If this is a real gift, great, she’s helping this woman get over some pain. If this is a con, she’s still helping that woman ease her pain. Isn’t she?

A few times a question from Caputo didn’t connect so she’d broaden up her search, or give up on it entirely, scanning the audience with a new malady dumped on her by the arriving spirit.

Her supporters were ardent and deeply committed to the woman they’ve come to know through her television show. It was amazing to see the comfort she seemed to give these folks, who seemed desperate for some kind of sign that death isn’t the end of everything. My teenage daughter, who was with me at the show, is a true believer in Caputo’s “gift” and can’t understand why I’m not onboard the Caputo train.

Actually, I’m not entirely sure I’m not.