How Trump Betrays His Supporters

Trumpcare in Wisconsin and nation hikes costs the most for Trump voters.

An earlier Data Wonk article summarized attempts in the national press to explain the Wisconsin counties that switched from Barack Obama in 2012 to Donald Trump in 2016. Without these Wisconsin voters, and a few similar ones in Michigan and Pennsylvania, Trump would not have been elected president.

An article by Claire Galofaro of the Associated Press went particularly deep in exploring the economic challenges that drove voters in Crawford County (Prairie du Chien) to take a flyer on Trump. The people she interviewed are no admirers of Trump or his tweets, but they feel hard-pressed economically:

Among them is a woman who works for $10.50 an hour in a sewing factory, who still admires Obama, bristles at Trump’s bluster, but can’t afford health insurance. And the dairy farmer who thinks Trump is a jerk — “somebody needs to get some Gorilla Glue and glue his lips shut” — but has watched his profits plummet and was willing to take the risk.

Galofaro reported that the problem is not the availability of jobs but the amount the available jobs pay:

There are plenty of jobs in retail or on factory floors, but it’s hard to find one that pays more than $12 an hour.

Among the challenges was the cost of health care, even under the Affordable Care Act. One woman:

said she’s glad the Affordable Care Act has helped millions get insurance, but it hasn’t helped her. … She and her husband were stunned to find premiums over $1,000 a month. Her daughter recently moved into their house with her five children, so there’s no money to spare. They opted to pay the penalty of $2,000, and pray they don’t get sick until Trump, she hopes, keeps his promise to replace the law with something better.

Trump won over many of these formerly Democratic voters by promising a brighter economic future, including better health insurance. During his campaign he promised to repeal the Affordable Care Act and replace it with something much better. He promised “everyone will be taken care of” with “insurance for everybody.” He further promised “no cuts … to Medicaid,” “no one will lose coverage” and “nobody will be worse off financially.”

The proposed replacement for the Affordable Care Act, dubbed the American Health Care Act (AHCA), was recently analyzed by the nonpartisan Congressional Budget Office (CBO) and the Joint Committee on Taxation (JCT). The finding that has received the most attention is the CBO’s projection that the AHCA would restore pre-Obamacare levels of uninsured Americans, as shown in the next graph. 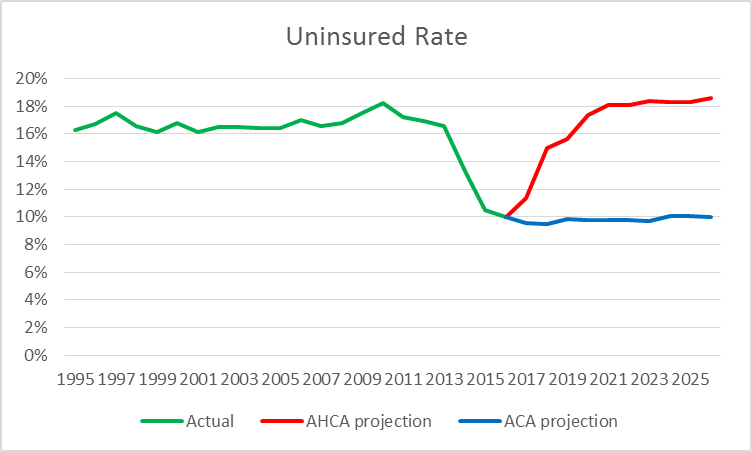 As the graph reveals, under Trumpcare the percent of Americans without insurance would rise from 10 percent to 18 percent. Several factors contribute to this, including removal of the mandate to buy insurance, cutting back on Medicaid funds, and far higher net premiums, particularly on older and lower income people.

A survey by the Kaiser Family Foundation finds a plurality of Americans—and a strong majority of Democrats–agreeing with the CBO that enrollment would decline. However, a plurality of Republican disagree with the CBO. This internal Republican divide parallels the broader split between ideologues wanting to get the government out of health care and those hoping that the replacement would be “insurance for everybody.” A recent Kaiser Family Foundation poll of the American public found that 48 percent agreed with the CBO that the ACA replacement plan would cause enrollment to shrink. However, as shown in the graph below, a plurality (34 percent) of Republicans (in red) expected enrollment to increase. 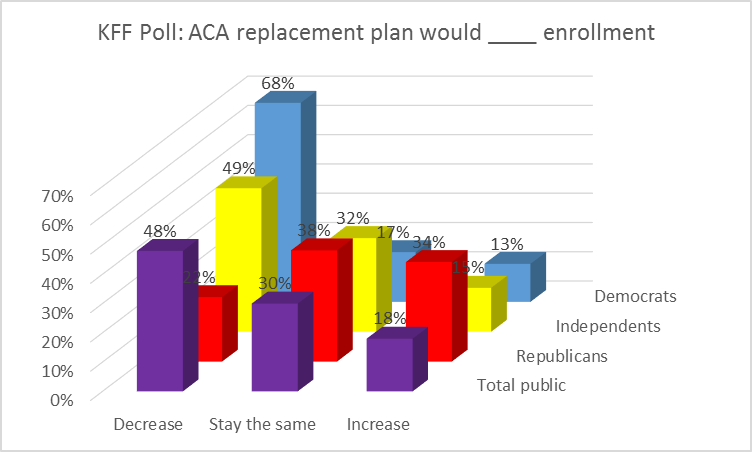 How would the replacement affect Crawford County? The CBO has two projections comparing the net cost of health insurance to people depending on their age and income. The next graph compares the CBO’s estimate of the net premium payment, as a percentage of income, under Obamacare (in blue) and Trumpcare (in red) for someone making 175% of the Federal Poverty Level—in other words the average persons of certain ages interviewed in Crawford County. 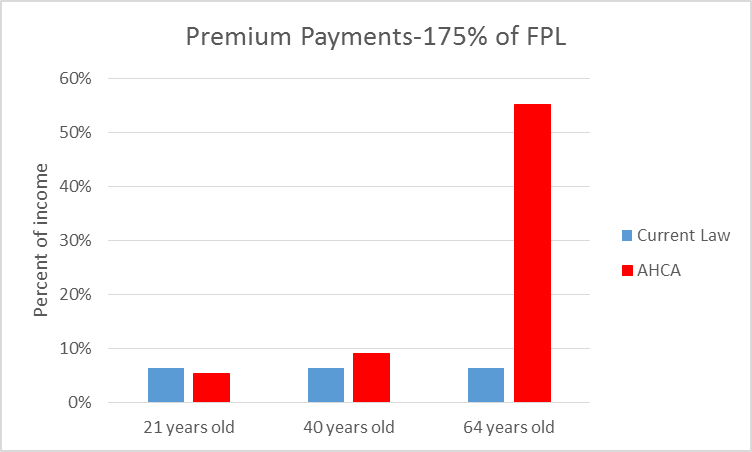 The youngest consumers benefit from the replacement, but by the time people become middle aged they are paying more for Trumpcare. For those nearing age 65, Trumpcare consumes more than half their income, making it unaffordable. Several factors contribute to this result. Most importantly, Trumpcare replaces Obamacare’s tax credits based on age, income, and the local cost of insurance with a credit based only on age. Second, while Obamacare limits the cost to older people to three times the cost to the youngest people, Trumpcare allows insurance companies to charge rates five times as much as they charge young people.

The press has widely reported evidence that Trump voters like those in Crawford County, who helped put him over the top, are likely to be most hurt by the replacement to Obamacare. For example, see this report by the Journal Sentinel’s Craig Gilbert, entitled Rural Wisconsin takes hit in GOP health plan after backing Donald Trump, or Republicans Walk a Tightrope on Health Care in the Midwest from the New York Times.

Surveys find that the typical Trump voter, especially one who previously voted for Obama, is older, lives in a small town or rural area, lacks a college degree, and is white. Crawford County wages fall between $20,000 and $30,000 per year and are likely to be representative of other counties that swung to Trump. The next graph compares the tax credit under Trumpcare (in red) to the current Obamacare credit for a person making $20,000 per year in two Wisconsin Mississippi River counties, Crawford (in orange) and its near neighbor Trempeauleau (in green). The Trumpcare tax credit is lower at all three ages but is particularly bad for a 60 year old. This is particularly true in Trempeauleau, because of much higher insurance costs. 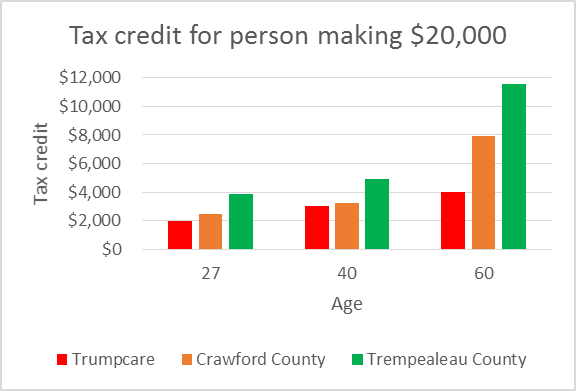 The next graph makes the same comparison for someone making $30,000. Because insurance costs are lower in Crawford County, Trumpcare’s flat tax credits are larger for 27 and 40 year olds. While costs are generally higher in rural areas, that rule does not hold true everywhere. Consider Wisconsin’s two largest cities. Milwaukee insurance costs are similar to Trempeauleau’s; Dane County’s to Crawford’s. 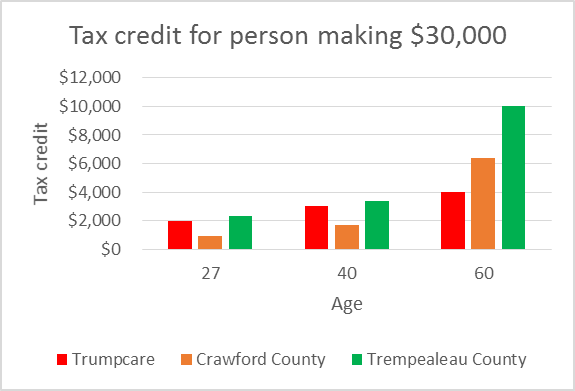 In addition to raising the net premium for older people, particularly those with low incomes, Trumpcare reduces their benefits. The next graph shows the so-called “actuarial value” of the plans—the percentage of expenses covered by the plan as opposed to the consumer. Under current law, what the consumer is expected to pay is limited to 13 percent of expenses; this rises to 35 percent in the proposed bill. 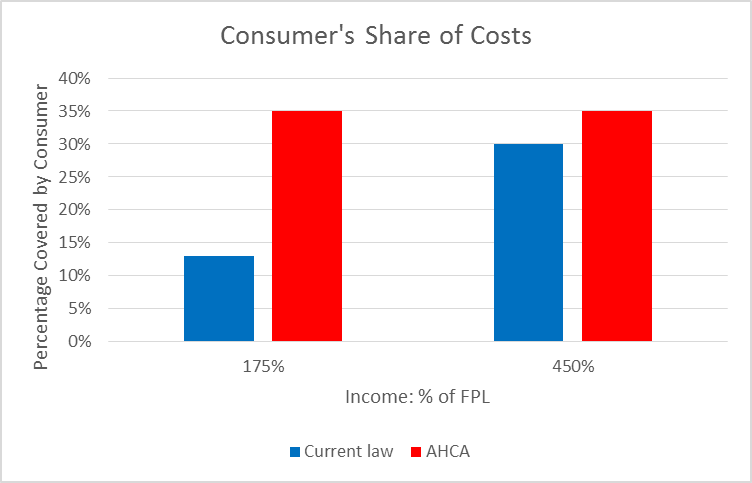 Politicians are often criticized for being too ready to reward their supporters, at the expense of the broader national interest. Oddly, Trump seems to have reversed that practice. Rather than finding ways to reward his supporters in places like Crawford County, and the other 50 Mississippi counties in Wisconsin, Iowa, and Minnesota that went for him, or the other places feeling they are losing out in a changing economy, he is supporting a replacement plan that goes out of its way to punish them.

Some of those switching to Trump find his business experience an asset. Galofaro quotes one as saying, “I think he’s a shrewd businessman. He’s been broke several times. He keeps bouncing back, and he knows how big business works.” Although Trump has been particularly secretive about his business operations, his treatment of the folks in Crawford County who helped him win is consistent with his treatment of students in Trump University, of his subcontractors in his construction projects, and his investors in his casinos.

8 thoughts on “Data Wonk: How Trump Betrays His Supporters”