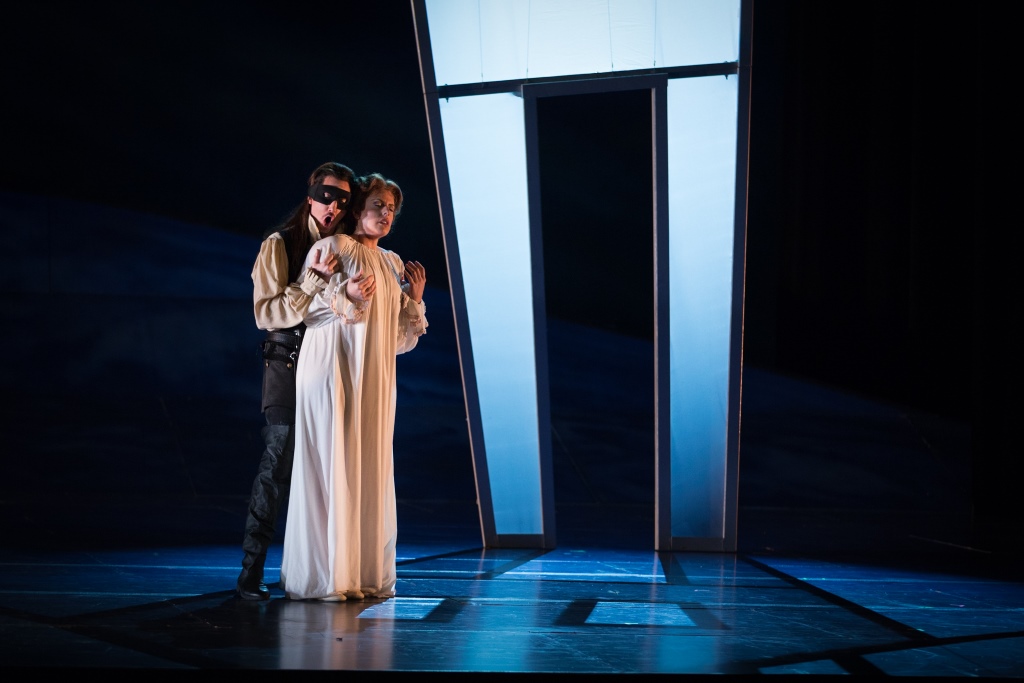 One of Mozart’s most famous operas, Don Giovanni, has not endured in popularity because its plot unfolds in a simple straight line (it doesn’t), nor because it faithfully adheres to one operatic style (it doesn’t) nor because you can walk in humming the melodic lines (anything is possible with Mozart but still it doesn’t).

It’s because this 18th century genius composed freely and ferociously across styles, almost daring every orchestra and singer to stay with him. There may be pointed meaning in the libretto by Lorenzo Da Ponte, but mainly the opera is loaded with showy arias, rapid-fire recitatives and “sing to the front” ensembles to mark each major development or close each act.

The voices have to be gaudy in the good sense, dramatic, quick and soulful, and that’s where the Florentine Opera Company March 17 and 19 at Uihlein Hall correctly focused on a lead cast mainly new to Milwaukee while resurrecting scenic and staging elements from its original 2006 production – including Kris Stones’ set, which is clearly built to travel, as it already has to other opera houses.

The title protagonist (hardly a hero) was embodied in physique, serpentine poses and baritone power by Alexander Dobson. He flashes his sword and prowls for women like Douglas Fairbanks reborn into lechery. He must be simultaneously loathsome and attractive — a serial seducer working his way across Europe. Dobson not only has to sing amazingly crisp and strut with arrogance among his victims, he also has to relish the cynical laughter of the world’s most incorrigible cock of the walk. The Devil, in the form of the statue of a man he killed, may have other plans.

The complicated plot and spotlighted moments revolve around his conquests and pride in how he fools and rules over everyone. The vocal and physical counterpoint is his servant, Leporello, played with flailing hysterics and effective bass baritone by Musa Ngqungwana. He is forced to partner in Don Giovanni’s schemes while commenting on how nasty his master really is.

If Mozart had stuck with Leporello as the “common man” just being our humorous eyes and ears, this might stick the piece hard in a traditional comic opera vein of the period. But the dual purpose of the characters and music go further. Don Giovanni is not only hypnotic to women and evil to all (in a society the furthest imaginable from modern feminism, full of women swooning away over a known lecher). He is far more, as the production cleverly pointed out in a surprisingly modern coda (inviting us to visualize our own concept of the slimiest contemporary Wall Street wolf or politician). He is a self-centered non-stoppable me-firster for all times. (Similarly, the English supertitles atop the proscenium had some fun with the Italian libretto.)

He also stands in contrast to the concerns for women – or in his view, submission to women – of the men he encounters, dupes or kills, such as Donna Anna’s father. Here David Leigh has little opportunity for acting but provided some impressive bass notes that would frighten an ordinary man. But not this Don, to his peril.

The lovesick anguish of Don Ottavio precisely fit the lyric tenor of Brian Stucki, whose several arias require a gentle touch and carrying power. Conductor Joseph Rescigno, leading much of the Milwaukee Symphony as well as the Florentine Opera Chorus, was astutely sensitive to the appropriate orchestral levels, but these voices would soar even if he showed less restraint, and the orchestra almost faded too far into the background.

There are three notable soprano voices leading the Mozartean parade. Emily Birsan’s second act essay of lament and love as Donna Anna was elegant in tonal care and sudden strength – conquering one of the opera world’s most famous arias.

Emily Fons as the fickle Donna Elvira, a role that requires comic ferocity with dramatic overtones in the early going, unleashed a beautiful second act aria of a woman overcome with love and self-disgust. It was wise for this moment to soften her earlier rigid coiffure with flowing hair and dressing gown as our sympathies shifted to her side in the battle of the sexes.

These new voices to the Florentine were joined by a familiar face and strong voice, Ariana Douglas, who added the flirtatious soubrette Zerlina to her Florentine repertoire. Her natural air overcame the traditional opera mime and long freezes (by characters forced to listen to others’ arias), still part of John Hoomes’ direction. Her stage partner, baritone Leroy Davis as Masetto, sang strongly but remained uncomfortable with their courtship choreography.

Such traditions have deep roots on a cavernous opera stage. It’s like helping us watch a tennis match and accept conventions of invisibility as the characters pretend to hide from each other. Such shifts in attention are designed to fill the long perspectives and isolated pools of the stage, convincing us through some well-positioned flying sets and bursts of costumes that we are cavorting in the Spanish countryside. All this sometimes clashes with Stones’ surrealistic scenic touches and Hoomes’ own preference for symbolism, such as the hooded background figures or writhing corpses foreboding death.

There are miscalculations, though — surprises supplied by the strength of a cast who shouldn’t have just been dropped into the existing staging. Dobson was powerful enough to carry his own sense of mischief and doom with him. Birsan sang and acted her aria of lament so engagingly that we simply didn’t need the dancer imposed alongside her on the scrim.

The Florentine chorus was well used as purposeful bit players but had perhaps too many to fit comfortably into the circumstances. So it was the leading voices and the casual power they displayed that riveted the patrons – making Mozart seem almost too easy. 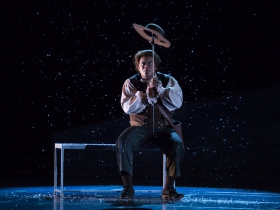 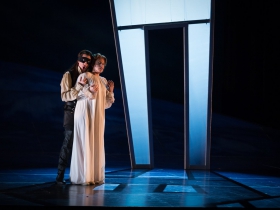 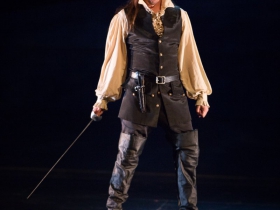 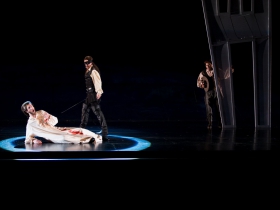 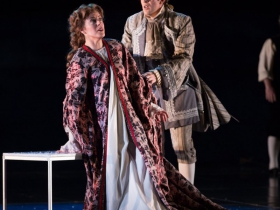 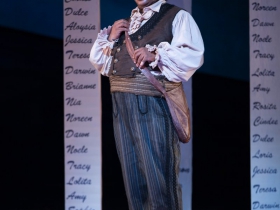