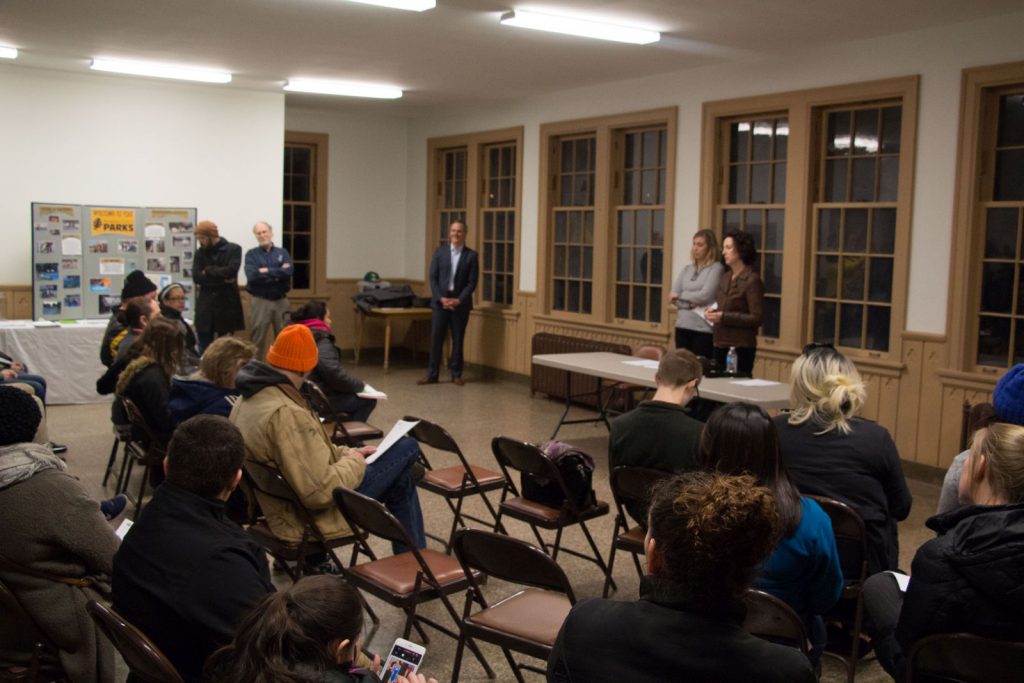 The Pulaski Park Pavilion, at 2677 S. 16th St., has officially reopened after being closed for nearly a decade. The Milwaukee County Parks Department and County Supervisor Marina Dimitrijevic hosted its grand reopening with a celebratory event Wednesday evening.

Thus far, the pavilion has gotten the most attention. New bathrooms have been constructed, lighting fixtures have been installed and lead pipes have been removed so the building is now up to health code. The park’s indoor pool has also been renovated and is completely usable.

The restored pavilion will be open to the public year-round. Reservations are necessary for large-group activities.

Great changes are also planned for the park.

Patrick Elliott, Project Manager for the Milwaukee Metropolitan Sewerage District (MMSD), discussed its plans for the Kinnickinnic River that runs through the park. Currently, the stream has concrete banks installed to help reduce flooding, but this has many negative side effects, and an MMSD project will naturalize the river by replacing the concrete with rocks and vegetation. The concrete made the river look like an open sewer, proved to be a safety hazard and killed the river’s natural qualities, as the water whisked quickly downstream. The naturalized river will slow the stream down and widen it, creating riffles and pools that attract fish and aquatic life.

Other plans for the park plan include rebuilding the pedestrian bridge over the stream, and updating and recreating the basketball courts and playgrounds. These improvements will take about a year to complete.

Another project would create a futsal court to add to the existing and upgraded tennis courts. Futsal is a scaled down version of soccer, played with fewer players on a hard surface.

Southside resident Emer Martinez spoke of his concerns for his children, and their love for soccer.

“I moved here in 1994 from from Mexico and not too many Hispanic people were here yet playing in these same parks,” said Martinez. “But now, the fields are ugly,” and also a safety hazard, he noted. “We have to watch our knees and ankles…we need turf to play on. I don’t want my son or the other kids injured. I know I’m not the only one.”

Dimitrijevic reminded the crowd that this is the only way they are going to further improve the park: through community participation.

James Moran of Moran’s Pub, a soccer bar in South Milwaukee, spoke about developing an Athletics Task Force for all of Milwaukee, believing the more investment made towards the children, the less law enforcement will be necessary. Area Alderman Jose G. Perez agreed to meet with Moran to discuss this matter further.

The park has had issues in the past with vandalism.

“We need your help,” said Dimitrijevic. “We want a busy, safe and clean park with your participation.”

Moranda Medina of the Sixteenth Street Health Center said the community can positively engage the park through volunteer cleanup efforts.

Written surveys were conducted, and raffle prizes were distributed among the attendees.

Residents will be able to reserve the pavilion for various activities through the County Parks Department. To rent the pavilion, call 414-257-PARK to speak with an associate. 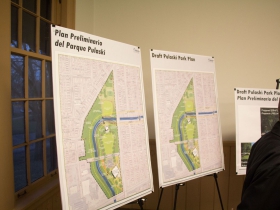 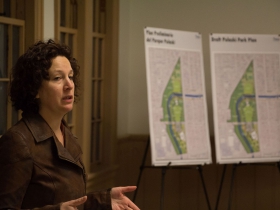 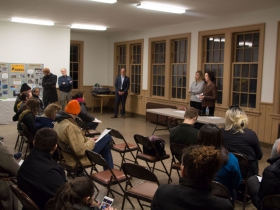 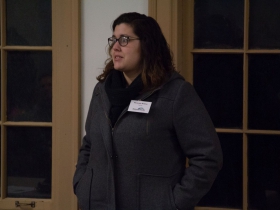 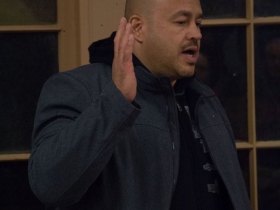 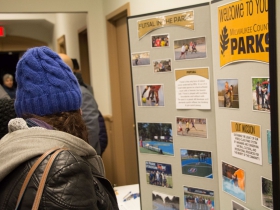