Blues musician met with Lancaster students before her show here. She was a hit.

By Gabrielle Barriere - Mar 2nd, 2017 05:01 pm
Get a daily rundown of the top stories on Urban Milwaukee 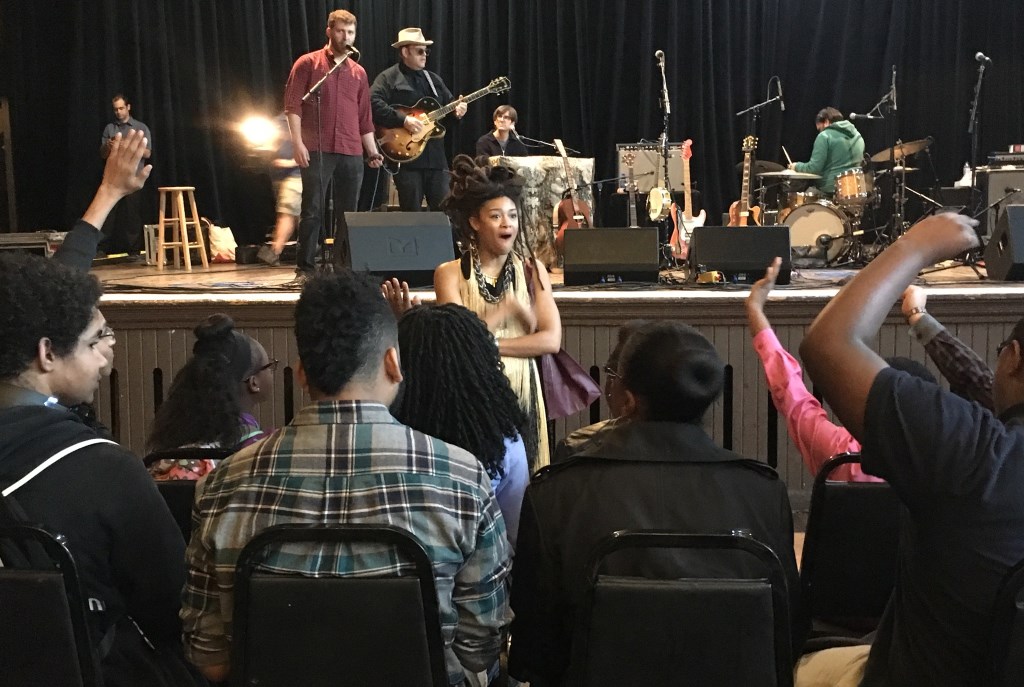 The student’s hands flew up when the musician asked, “So who here likes to draw?” Photo by Gabrielle Barriere.

Last week, musician Valerie June came to town to perform at Turner Hall. But she did an early performance of sorts for students from Lancaster Public School, an elementary (K-8) school located on the city’s northwest side. June opened the doors of Turner Hall Ballroom to give 15 students a backstage tour, a private sound check and short performance, advice and pre-show snacks.

June, 35, a Memphis-based musician who grew up in Humboldt, Tennessee, is known for music that blends soul, blues, folk and Appalachian traditional songs. She was exposed to the music business at an early age, because her father was a promoter for musical acts like Prince, Bobby Womack and others. As a teenager, June’s first job was helping her father hang posters promoting concerts.

Lancaster, located at 4931 N 68th St., is one the Milwaukee Public Schools’ new program of “Turnaround Arts,”  with smaller class size, an emphasis on the arts and preparing kids early for college. Lancaster is one of four MPS schools that are part of the Turnaround Arts program. The students who met with June were energetic and excited to meet a famous musician. 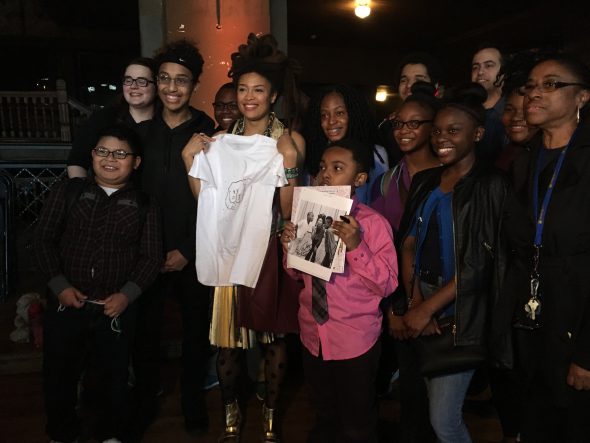 June and the students posing for a picture with their gifts to the musician: a custom designed shirt and art project. Photo by Gabrielle Barriere.

Among the students were young artists, designers and musicians, ranging from elementary age to middle school. They brought a gift for the musician: a custom designed t-shirt and art project.

In return, June gave the students and school music department a bright red electric guitar that she herself played for five years. The guitar was made in Sweden and was given to her from its previous owner, who played it extensively in Australia.

“This guitar has been around the world,” June said to the children.

June gave a private sound check while explaining this process to the students, and introduced them to her various instruments: an acoustic guitar, electric guitar and a banjo. The students giggled when she referred to them as family members, including Mama the electric guitar, and Baby the banjo. Each instrument tuned quickly.

“I think they like this room,” said June regarding her instruments. “Some rooms, they are happy and want to rock ‘n roll all night. I think they must be happy because you came to see them.” 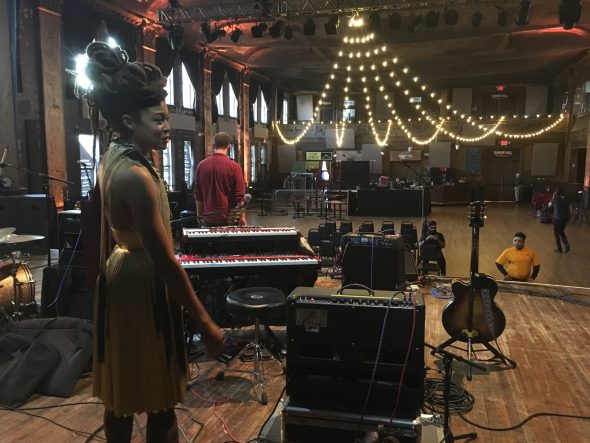 June giving a tour of the stage and her instruments. Photo by Gabrielle Barriere.

June played her song, “Got Soul,” for the children, who jumped out of their chairs dancing and clapping to the energetic beat. A few were given tambourines from the stage so they could add their own sounds and play along. Meanwhile, the lighting crew was checking the stage lights, making the stage aglow with purple tones only adding to the energy.

After the performance, June led the children to the upstairs of Turner Hall, where she handed out cookies, juice and bags of chips to them. The students’ faces lit up with smiles.

“You know, when kids are sleeping and the dump truck goes down the street…that’s music,” she said. “Just finding the music in everything and the light in everything is really what I feel like this program does for kids.”

Valerie June played for a full and appreciative crowd at Turner Hall later that night. She is currently on the road for her “The Order of Time” tour.

You can find out more about Turnaround Arts program here.