Mohammad Choudhry has 46 properties, 3,000 code violations and this house. 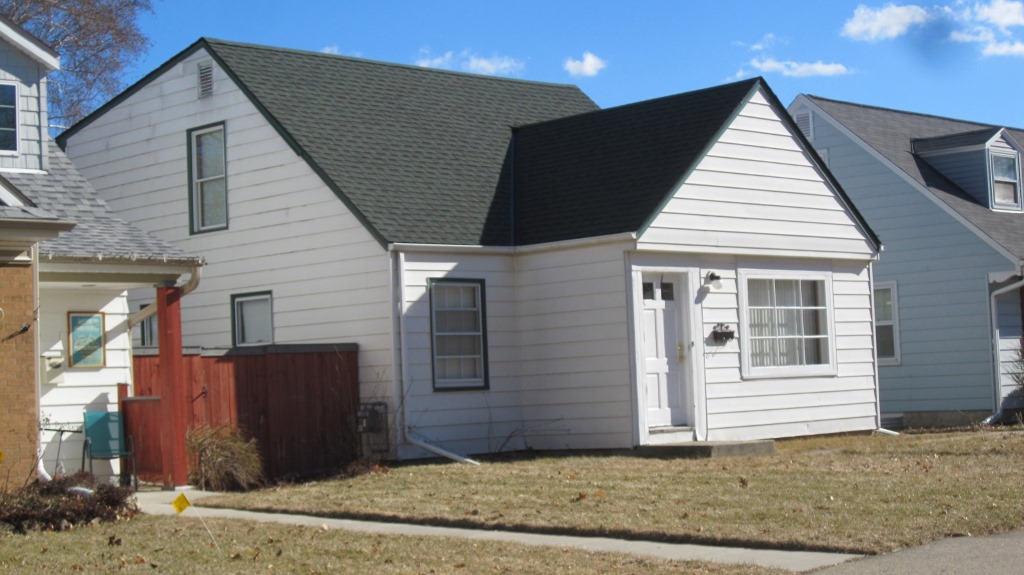 The City of Milwaukee claims Mohammad A. Choudry is engaged in a “scheme to defraud the taxpayers” through his convoluted real estate holdings, and his failure to maintain or pay taxes on his properties.

Late last year, the city seized 76 properties of his and put them into receivership, using a novel legal strategy. Inspectors found 1,788 building code violations, of which 540 involved health and safety issues.

The city is owed $400,000 in past due taxes from Choudry on at least 46 properties he owns or controls through his many subsidiaries. The city also claims $850,000 in damages from his “criminal racketeering.”

Choudry has been convicted over 80 times in municipal court, and has been served 700 orders to correct over 3,000 code violations in his properties. He was briefly jailed, and promptly released by Sheriff David Clarke.

In all of these instances, he has used as his home address this modest 789-square-foot home on the south side near Manitoba Park. The home today is listed as belonging to “Mohammad Rafiq c/o Mohammad Choudry” in city real estate records. As recently as December, Choudry’s name was not on the records.

Choudry has also been known as Mohammad Chowdry, and has numerous holding companies.

Like his rental properties, Choudry’s home is also delinquent in property tax payments dating to 2013 in the amount of $22,049. His home has an assessed valuation of $27,400 for the land and $65,200 for the improvements for a total of $92,600. His current tax indebtedness on that property alone is equal to nearly a quarter of its total value. Municipal administrators frown on such a state of affairs.

Kail Decker, an assistant city attorney and unsuccessful candidate for municipal judge, explained how Choudry’s racket works. He collects rents, sure enough, “but will not pay for repairs, won’t pay taxes or insurance, so it’s all revenue, no expense,” Decker told Fox6 news.

Once the properties have been bled, Choudry could walk away, obliging the city to take back the diminished properties in tax foreclosure. The city’s forceful action against Choudry could be seen as an attempt to preserve its property rights, and the right of the public to live in a sound community free of intentionally blighting influences.

The receivership allows the city to use the revenue stream from the properties to pay off the tax and fines, and to make the urgent repairs, or to demolish seriously compromised structures. Meanwhile, Choudry’s revenue stream is cut off.

The Choudry home was built in 1949 by Realty Developers, Inc. on a 39′ x 123′ lot in the Jackson Park Realty Co. subdivision. It was listed on the building permit as a “single family, 4 rooms + Bath, attic up.” A permit for the construction of the $8,600 structure was issued in March, 1948, but the final approval of the construction did not occur until December 20th, 1948, with the A. C. Sehrt Company listed as the owner of the speculative house. Sehrt was a well-known design and build firm.

The compact residence was heated by a gravity-fed coal furnace, which even at that time was an anachronism. By May, 1951 the house was owned by Mike Prijic. Prijic was not fond of his fuel supply, gravity-fed or not. He had his furnace converted to a gas-burning one, as the new natural gas line reached his home. In August, 1951, the enterprising Prijic paid $650 to have a 1-1/2 car garage built in the back yard, with a slab next to the structure. It’s still there, but appears to be unused, as the door is rotted.

Mr. Zarky traded or sold the home to Peter and Emily Yelic, who moved in. In 1988 the Yelics got a letter from the city advising them they were forbidden to park an unlicensed vehicle outdoors on a residential property for more than 30 days. The Yelics moved the car, and that drama was over.

In 1989 the home got aluminum siding, from which it still has not recovered, aesthetically, not that there was much beauty to begin with for this very plain Cape Cod. The assessor kept trying to get inside to have a look around, but negotiations with the elderly residents and their son went nowhere.

This triggered a “doomage assessment,” in which the assessor has to use the best information available without a personal inspection of the property. The property owner loses the right to appeal the assessment to the Board of Review.

Accordingly, the assessor noted window shades in the attic on April 22nd, 1993. He sensed that the possible third bedroom was concealed behind the blinds. “Assume 100% finish attic,” he wrote in his calculations, increasing the assessed valuation. He also figured that after 45 years the bathroom and the kitchen would have been remodeled, so he raised the values of those rooms. Assessors have the right to do that if you don’t let them in your house.

The increased assessment, and the new bedroom, got the attention of the Yelics, who finally relented and let the assessor into their home on August 12th, 1993. Surprise! There was “no attic development; NO modernization — original Kit + Bath. Rating Poor.” The assessment was reduced.

In July, 1997, the assessor came by to have a look outdoors. “Starting to look ragged on outside. Yard + Lndscpg not mntd. 7′ tall “pricker” bushes by gar.”

By March 2001 the home was bought by the city, possibly in a tax foreclosure, and was sold in September 2002 to the current owner.

The way things are going, the city will have this home on its hands again.

Whereas Jackson Park has some particularly nice blocks with fine homes, this is not one of them. Those areas tend to have been built prior to World War II, and were located to the east, served by shops in mixed-use buildings on commercial streets. Aerial photographs from 1937 show this as the frontier, with some farm and idle land remaining in patches as the city spread west. Some subdivisions are platted and paved, yet the lots remained vacant due to the Depression.

By the time the war was over and the baby boom was in full swing, this area developed in a hybrid fashion, with small houses on orderly grid blocks served by single-story commercial buildings surrounded by parking on the major streets. The high points today are Serb Hall and Discount Liquor.

This home is neat, if unadorned. The roof looks new, yet the facade is almost comically barren, with no porch, or even handrails on the simple slap that leads to the front door. Shutters would have enhanced the facade, while the vegetation is limited to grass and dirt, with not even an attempt at foundation planting. In fact, the only “landscaping” in sight is a newly planted sapling smack dab in front of the home between the sidewalk and the street.

The tree was planted by the City of Milwaukee Department of Public Works Forestry Operations. To the north of the tree, a patch of sod had been cut away for some underground utility work. That project was undertaken by the Milwaukee Water Works, also owned by the city. 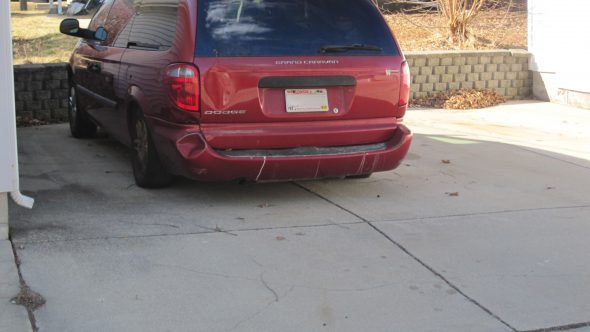 The back yard, as seen from the alley, has a couple of lawn chairs and a gas grill. The attic has certainly been bumped out in the rear, and a two-story deck has been attached to the home. All shades are drawn throughout.

In the rear of the home, a beat up red Dodge Caravan with flat tires rests on a pad next to the garage. Its plates will expire at the end of February, after which it looks like there will be one more violation here, since you can’t park a vehicle with expired plates out of doors, even on private residential property. Nor, for that matter, can you drive a vehicle with flat tires and expired plates to get the required emissions testing done to renew the plates.

This is a conundrum, but not the least of Mohammad Choudry’s worries. 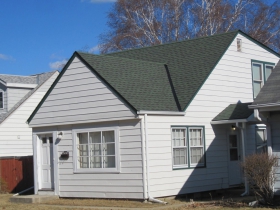 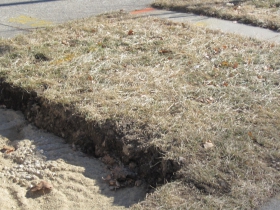 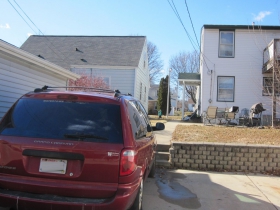 How Milwaukee Is It? The residence is 6 miles southwest of Milwaukee City Hall.