The developers of the new library on Good Hope Road got approval for site control yesterday, pending adoption by the Milwaukee Common Council, and announced a new budget and affordable units set aside for veterans.

The two developers, Maures Development Group, LLC and Royal Capital Group, LLC, both local African-American-owned firms, have partnered with the Milwaukee Public Library on the mixed-use project at 7717 W. Good Hope Rd., and will be developing the housing units attached to the library.

Melissa Goins, founder and president of Maures Development Group, called the partnership with Royal Capital “historic” and “more than a big deal.”

“It’s two African American firms working together to do something in conjunction with the city of Milwaukee,” she said. “It aligns with all of our individual and collective passions to sort of give back”

The developers estimate a budget of $13 million to build the housing and white box the library space before turning it over to the public library’s architect and general contractor, who will build out the library itself.

The four-story apartment building will feature 65 units, with 9 walk-up units on the first floor.

Ten apartments will be leased at market rate with one-bedroom units going for $740 a month and two-bedroom units at $850 a month.

The developers are also setting aside 13 units for veteran families, and are working with Lutheran Social Services and Milwaukee County Veterans Services offices, said Terrell Walter, the project manager for Royal Capital Group.

The building design has gone through several iterations, said architect Mark Ernst, a partner at Engberg Anderson Architects. The latest version displayed at the committee meeting is “Stepping the housing back from the street and promoting the library in its own identity,” he said.

The new design also features a green space for the use of both residents and library patrons, Ernst said.

Two parking lots will be included: One for residents, containing 65 spots and another with 61 spots for the library.

Ald. Chantia Lewis, in whose district the project is located, said she was “elated” to have the library move to a larger space.

She added that as a veteran, she’s glad the developers set aside affordable units specifically for vets. “It is definitely something that needs to happen in the city a lot more,” she said, “because we are definitely striving with the veteran population.” 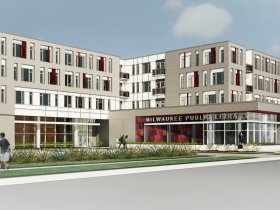 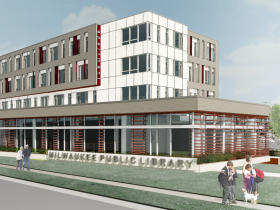 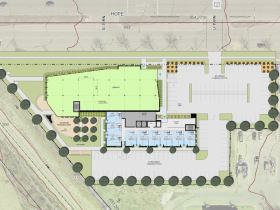