A differentiation strategy might work better than Walker’s low-cost approach. 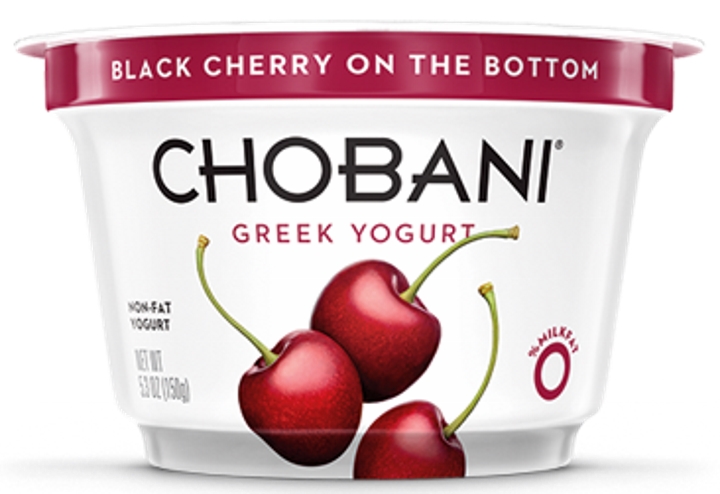 Donald Trump won Wisconsin because of the disaffection of Obama supporters in less populated areas who were unhappy with their local economy. In last week’s column I suggested it was time to push a differentiation strategy, rather than a low-cost strategy, for economic development. What would this entail?

The concept of the two generic marketing strategies evolved from studies of corporations and their divisions, notably General Electric. One discovery, not so surprising, was that businesses with very high market share were often among the most profitable in their industry. This led to recommendations that diversified companies sell or close their divisions that weren’t number one or two in market share.

More surprisingly, it was discovered that some businesses with low market share were also very profitable. The ones in the middle were most likely to struggle.

This led to the concept, generally credited to Harvard’s Michael Porter, that the successful businesses followed one of two distinct strategies. One group aimed at being the low-cost provider. Because of economies of scale, being large was often a distinct advantage in driving down costs. Walmart and McDonalds are commonly-cited examples of firms that found success through a low-cost strategy.

The other group of successful firms avoids competing primarily on price. Instead they look for ways to differentiate themselves from their competitors. Compared to cost strategies, differentiation strategies can take many different forms—innovative products, responsiveness, a willingness to alter the product according to customer need, etc.

Either strategy can bring success. However, companies following the low-cost strategy are often under much more pressure, as others look for ways to under-cut them. Differentiation strategies, by definition, tend to differ from one firm to another. Much more room exists in most industries for differentiated business strategies than for low-cost strategies. By contrast, only one company can survive as the true low-cost provider in an industry. Being the second-lowest or third-lowest cost provider does not typically work well as a marketing strategy.

Here is an example of how this concept could be applied to Wisconsin’s rural counties. Recently the yogurt maker Chobani announced it would move to using only milk from cows fed with GM-free (no genetically modified grain, etc.) feed. The reaction from some in the farm belt was outrage, and here’s a sample quote: “Chobani is making business decisions directed by a radical ‘environmental’ group that relies on fear-mongering instead of sound science.”

As another sign of opposition to GM-free labeling, the US House has passed Kansas Congressman Mike Pompeo’s bill to ban state labeling requirements on GMO foods and severely restrict any federal labelling requirement. (Since then, President Trump chose Pompeo as CIA director.)

The question of whether genetically modified foods are safe is one in which the public differs from the scientific community. The graph below shows the results of a 2015 Pew Research Center poll in which members of the public and of the American Association for the Advancement of Science (AAAS) were asked to opine as to whether or not genetically modified foods were generally safe or not. 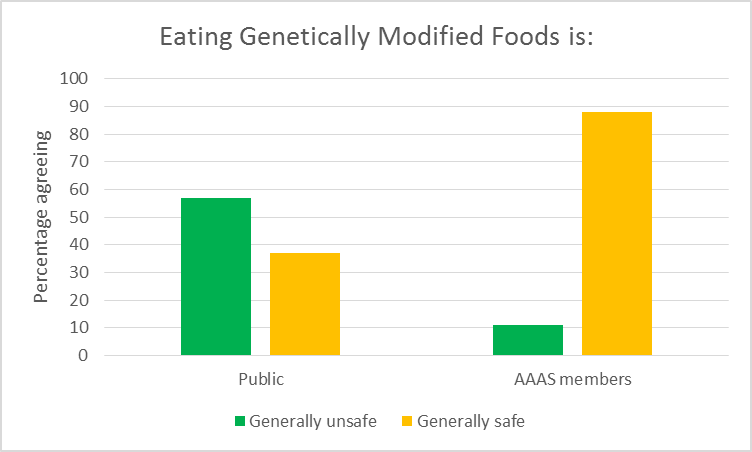 The consensus of the AAAS members (most of whom are scientists) is supported by reputable research. Studies that claimed GMO’s caused health or other problems did not withstand scrutiny.

One question, then, is whether customers hesitant about GMO’s should be allowed to act on their beliefs by purchasing products certified as GMO-free? Should Chobani be able to proceed with its plans to use GMO-free milk and advertise its yogurt as GMO-free?

By contrast, avoiding animal feed that has been genetically modified to aid pest control would have far less impact. It might lead to somewhat more costly pest control methods and this might be reflected in the price Chobani charges consumers, but they seem to want the product.

In opposing an FDA decision not to require the labeling of genetically engineered salmon, Consumers Union referred to the public’s concern on this issue. Adam Smith would agree. In his Inquiry into the Nature and Causes of the Wealth of Nations, he stressed the centrality of the customer: “The real and effectual discipline which is exercised over a workman is that of his customers. It is the fear of losing their employment which restrains his frauds and corrects his negligence.”

Whether validly or not, some consumers desire to avoid GMO products. Shouldn’t they have the right to make decisions based on their desire?

From the business strategy viewpoint, does the dairy industry’s opposition to the Chobani decision make sense? Let’s start our inquiry by looking at the demand for milk, shown in the next graph: 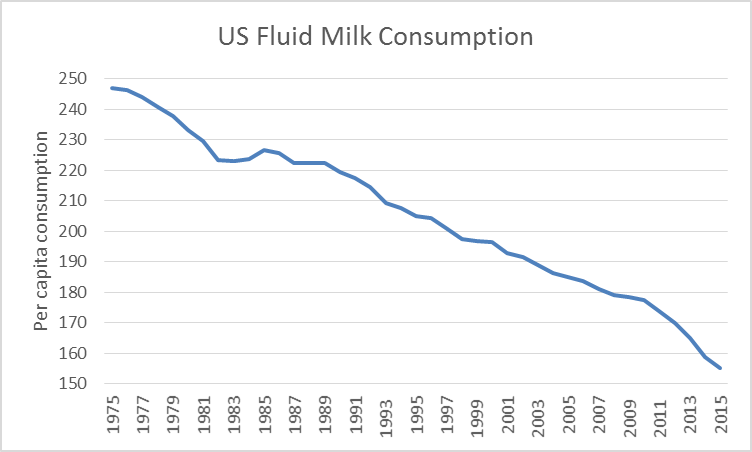 At least since 1975, per-capita milk consumption has been steadily declining. This is not an industry with a crying need for more production capacity. Nor is it an industry that can afford to drive away customers.

The factors behind this decline are unclear. Part of it may be a growing suspicion that milk falls short of being “nature’s most nearly perfect food” — that it could contain strange organisms may feed into that perception.

As fluid milk sales have declined, other foods in the dairy case have shown growth, particularly yogurt, up 644 percent, and “other cheeses” (other than cottage or American cheese), up 243 percent. However, this growth has not been enough to make up for the decline in fluid milk sales. 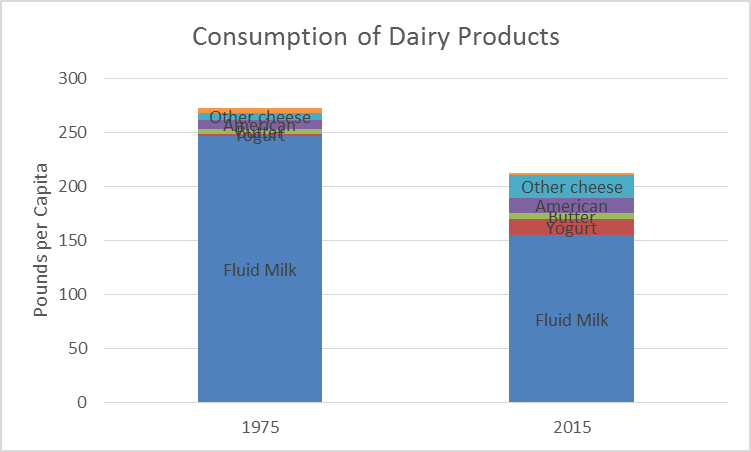 Viewed from the sales trend, it makes more sense to regard the interest in GM-free foods as an opportunity, not a threat, for the dairy industry.

First, it is never a good idea to tell one’s customers that they are wrong. If customers believe GM-free food is important, not offering what they want is likely to reduce the potential market.

Second, the more food categories there are, the more opportunities there are for differentiation. If most producers refuse to offer GM-free milk, that offers an opportunity for a producer willing to serve that market.

Some of the economic initiatives from the Walker administration can be questioned on the same basis. Consider its encouragement of large feed lots in Kewaunee County. By increasing milk production and driving down costs they put price pressure on smaller dairy farms. Economists would regard the resulting groundwater contamination as a classical example of “cost externalization”—shifting costs to neighbors or society as a whole.

States such as Wisconsin, whose economic development efforts are based on a cost strategy, face competition from numerous other states and foreign countries following the same strategies, making the cost to the taxpayers increasingly heavy. They also face the reality that if successful, the firms attracted are likely to also be pursuing a cost strategy and be ready to bolt whenever the costs look lower elsewhere.

Intellectually, developing a low-cost strategy is straightforward. Start by studying the most successful competitor. What cost-saving steps have they adopted that we could imitate. Better yet have firms in other industries devised cost-savings that could be imitated?

The intellectual task to developing a differentiation strategy is much more complex. The last thing one would wish to do is imitate the most successful competitor. Instead one might ask questions like, are there potential customers whose desires could be better served?

Wisconsin has great potential to win economically through differentiation. Its specialty cheese creators, for instance, have won many awards in cheesemaking competitions, thus moving away from producing low-cost bulk cheese and creating higher-profit products unique to Wisconsin. And its fledgling wind industry was creating home-grown energy to replace imported coal and gas, until Walker and the Republicans took policy stands that discouraged the growth. Walker seems committed only to a low cost strategy, and that so far hasn’t worked well for Wisconsin.