By Tamarine Cornelius, Wisconsin Budget Project - Feb 9th, 2017 02:04 pm
Get a daily rundown of the top stories on Urban Milwaukee

Governor Walker has proposed significantly increasing state support for public schools, but the bulk of the increase would be distributed to school districts in a way that does not take into account the challenges faced by districts with high numbers of students coming from families with low incomes.

We don’t yet have the full details on what the Governor is proposing for the state’s education budget, but he released a brief summary earlier this week. His budget proposal includes additional funding at aimed addressing the challenges of rural schools, increasing student achievement in summer school programs in Milwaukee, and helping school districts connect students with disabilities to employment.  (Read more about his education proposals in this AP article: Walker Proposes Big $649 Million Boost for K-12 Schools.)

By far the biggest component of the education proposal is an increase in the amount of financial support that the state provides to school districts. Governor Walker is proposing increasing state aid to districts by $200 per student in the first year of the budget, and then by another $204 in the second year of the budget.

That increase represents a major investment in Wisconsin’s schools, with the state investing an additional $509 million in public schools over two years.

The problem with the new resources is the way they are delivered. Districts that serve mostly low-income students often need additional resources to help students achieve their full potential, compared to school districts in wealthy areas. But under the Governor’s proposal, each school district would get the same amount of increased aid per student, regardless of whether the district serves mostly students from families with low incomes or students from wealthy families. This approach doesn’t target aid to the schools with the highest costs or with students that are struggling to succeed academically, and it moves Wisconsin away from its long commitment to provide more assistance to districts with less capacity to boost local property tax support for schools. 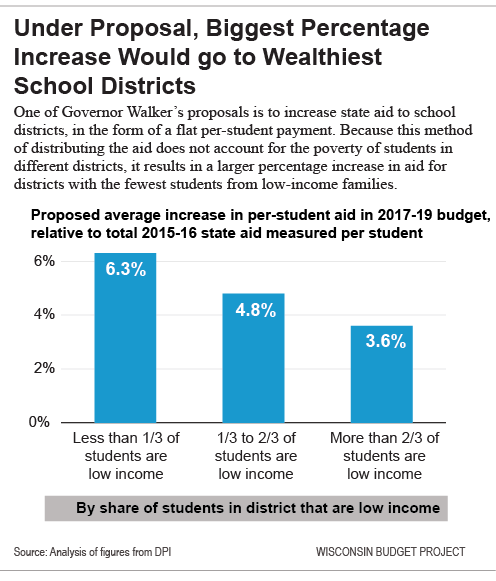 Wisconsin State Superintendent Tony Evers has praised some components of the proposal, but cautioned the Governor about providing an increase in state aid on a flat per-student basis, saying “If you’re giving a wealthy district the same amount as a poorer district … over time that takes a toll.” (Read more about the reactions to the Governor’s proposal in this Milwaukee Journal Sentinel article: Gov. Scott Walker’s Budget Would Shift Wisconsin’s Approach to School Funding.)

If Wisconsin public schools are to continue to provide children with the kind of high-quality education that state residents have come to expect, then Wisconsin needs to make a major investment of the size that Governor Walker is recommending. But in order to make sure that all K-12 students have a chance to succeed, we should target that investment to help the students with the greatest need, and the districts with the least capacity to increase local tax levies.