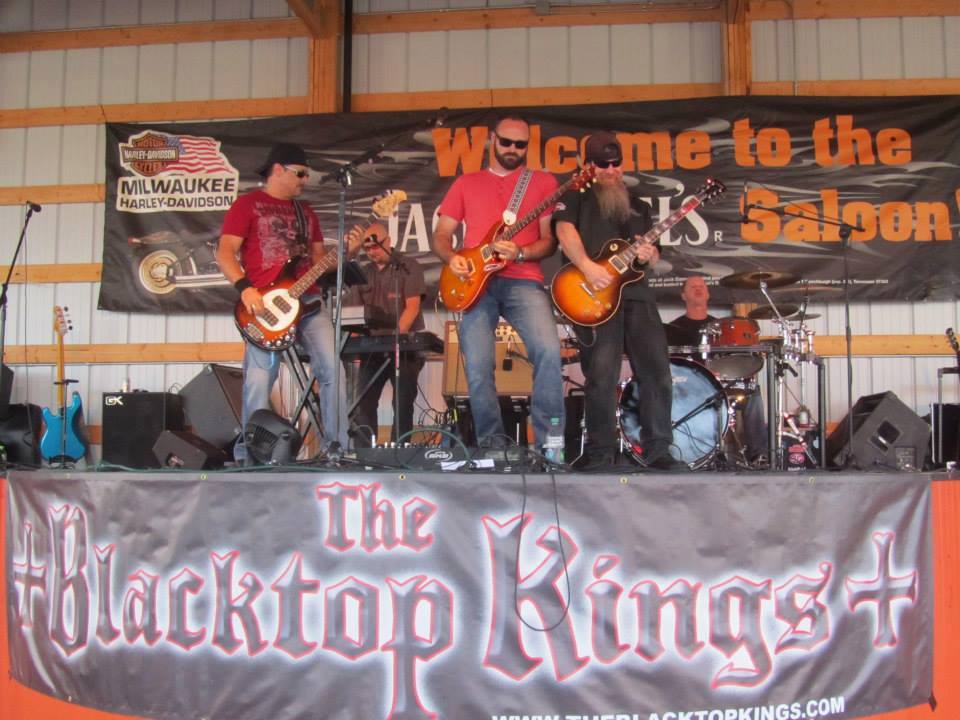 Hard-driving, bluesy and groovy is how The Blacktop Kings describe their music. The group consists of Cole Harris (lead vocals/lead guitar), Jeff “Mitch” Mitchell (lead guitar), Kevin Rand (bass), Dave Merrill (lead vocals/keys) and Chris Rehorst (drums). The group came together a decade ago and has been a success locally. They take pride in performing in Wisconsin, especially in the Milwaukee area. The band has ties to a long list of local groups.

Group members credit their ten years together to the relationships they have formed. Sticking together and “putting the band ahead of the individual” is a big key to succeeding in the music industry, Mitchell says. The Blacktop Kings are metal oriented, both in some of the songs and bands they like and in lyrics that promote the motorcycle culture that’s deeply rooted in Milwaukee. Two of its members work for Harley Davidson.

The band started as Cole and Mitch were discussing music, bands, guitarists, and playing guitar while working together at the Thunder in the Rockies Rally in Denver, CO in Sept 2006. They both work for Harley-Davidson and happened to be riding in the same car to Colorado. Back in Milwaukee, the two connected and over time created a band that added other members. “We started practicing in Nov ’06 thinking that we were going to play primarily blues,” Mitchell recalls. “We tried out three or four Stevie Ray songs, Hendrix, and Kenny Wayne Sheppard. Then we branched out into Allman Brothers, Black Crowes, and Lynyrd Skynyrd.”

But after Dave Merrill joined the bad in 2009, “this took our covers into a much wider scope, adding Led Zeppelin, Deep Purple, Kansas and others into our repertoire,” Mitchell goes on. “Dave also sparked the idea of writing our own songs.  We dabbled in writing in 2009-2010 but didn’t really get much traction. We tried again in ’14-15 and really started getting some interesting ideas going. We now have 10 original songs we are in the process of recording for an album.”

Mitchell responded to other questions we had:

What’s the age range of the band members?

What’s the meaning behind the band’s name?

The Blacktop Kings name was Cole’s vision. Blacktop pays homage to the motorcycle culture and traveling musicians, as well as the road, and Kings has ties to blues guitarists.

Our music is mostly hard driving, bluesy and grooving Rock. There’s a pinch of metal, southern, and progressive rock in there, too. Our lyrics are about riding motorcycles, relationships gone bad, memories of favorite times and places, and apocalyptic imagery.

Do any other artists influence your music style?

It started from Cole and Mitch’s common influences in the Allman Brothers’ Warren Haynes and Dickey Betts, blues artists like Buddy Guy, Stevie Ray Vaughn, and hard-rock-blues like Jimi Hendrix. Kev and Mitch played in bands that were more out of the Skid Row, Iron Maiden and Black Sabbath metal genre. Chris and Dave played in bands where they played progressive and classic originals and covers like Rush, Deep Purple, Mountain, and Uriah Heep. There are some influences from bands like Genesis and Pink Floyd, too. Led Zeppelin is the one common band that all five of us really like.

Are there any local bands you enjoy listening to or performing with?

What’s your take on the local music scene?

There’s a really great music community growing in the jam night space. And it’s really impressive to see how bands pull together for charity events, and to help out their fellow musicians, promoters, club owners, friends, family, and fans. There are some great people and musicians in town. There are some legendary venues that we are privileged to play when the opportunity arises.

Where is your favorite place to play in Wisconsin?

We’ve really enjoyed playing at the Northern Lights Theater and the Fire Pit Sidebar at Potawatomi Casino. The Saloon on Calhoun was great for our 10-year band anniversary. The Harley-Davidson Museum and the Harley-Davidson stage at Summerfest were also great. Charcoal Grill Roadhouse at State Fair, Fest on the Rock, O’Brien’s, Mustang Shelly’s, Witt’s End, and Shank Hall are also favorites of ours.

If you have toured, where have you gone and how was your experience?

We normally stick to Milwaukee and the surrounding suburban areas, and to the Rock County area. We did travel up to Hayward, WI where we played two nights, and the headlining band that weekend was the Marshall Tucker Band. They showed up a night early and hung out with us at the bar and watched us play. We hung out with the some of the guys afterwards and talked music, it was a blast.

Do you have any “dream” venues or cities you wish to perform in?

We actually like playing locally. The “dream” is now more about the experience than where the show is located. We were fortunate enough to open for a few nationals while playing cover songs right here in the area. Our “dream” type shows nowadays would be to open up for national bands while playing our own songs. Then we would move into doing our own big shows with mostly original music.

What are the most difficult things about being in a band?

The most difficult thing is finding the common ground on material, when to rehearse and when and where to play our shows. Putting the band ahead of the individual is the key to success. We’ve got a really good chemistry in this band which has kept us together for ten years.

Have you produced an album?

We have been working on our album slow and steady. We have all of the rhythm tracks completed and are now on to solos and vocals. We’ve been pleasantly surprised at the positive response to these songs at our live shows since we’ve been performing them.

Any plans for the future?

Getting the album finished is our biggest focus. We just had our 10 year anniversary show, so it’s all a bonus from here. We are still enjoying the road!