By Edgar Mendez, Milwaukee Neighborhood News Service - Jan 25th, 2017 10:10 am
Get a daily rundown of the top stories on Urban Milwaukee 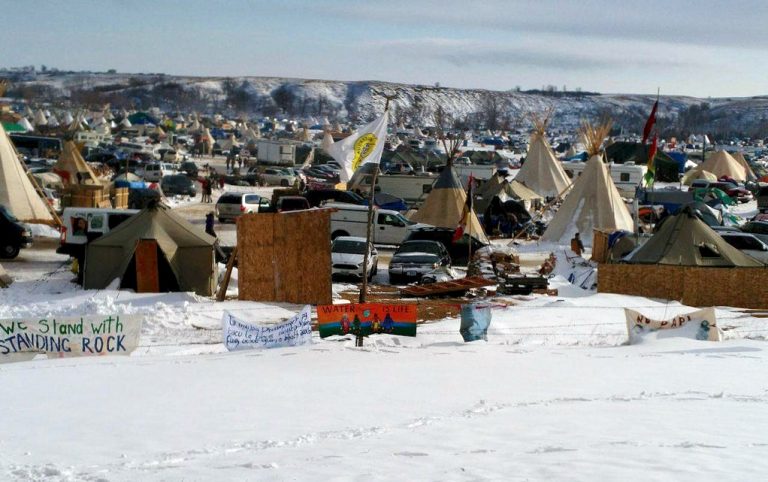 Those who thought that the standoff at the Standing Rock Indian Reservation was over when the U.S. Army Corps of Engineers denied a construction permit for the Dakota Access Pipeline in December should think again, said Daniel Guzman, 33, a Milwaukee native who is protesting there for the third time.

“Many thought that the fight was over and left, but we knew better and stayed,” Guzman said. He described in a Facebook post how he’d been targeted three times with tear gas canisters by police and been involved in several other clashes recently.

Guzman, an Oneida Nation of Wisconsin tribal member who has been splitting his time between Green Bay and Milwaukee in recent years, has joined other local activists traveling to North Dakota to join the Standing Rock Sioux Tribe and others in what they describe as a fight to protect the water. Constructing the pipeline would lead to contamination of the local water and the destruction of sacred sites, they say. The Standing Rock reservation straddles the border between North Dakota and South Dakota. 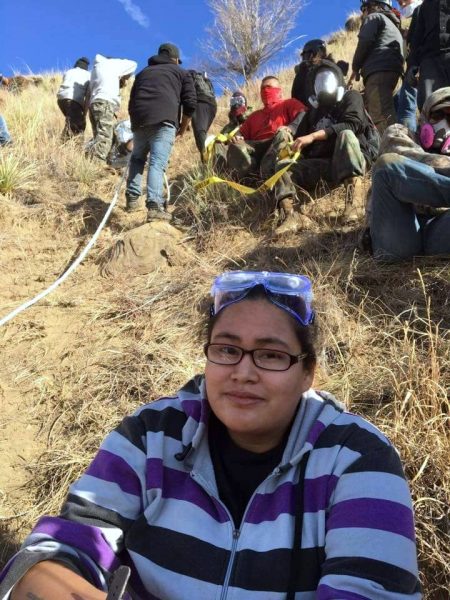 “Water sustains all life, and we should do everything in our power to protect it,” said Guzman, who said it was his calling to go. He added that the main focus now is surviving the cold and cleaning up abandoned camps, although protestors — who he described as peaceful — continue to be the target of aggression by law enforcement.

“The police charged us three times shooting [non-lethal rounds] and trying to grab people. Each time we would begin to sing prayer songs they would fall back,” Guzman posted on Facebook late last week.

Audri Casarez, 27, who is half Menomonee Indian and lives in Milwaukee, traveled in November to the Oceti Sakowin Camp, where protestors gather, after reading countless news articles about the standoff. Days started before sunrise with prayers and other ceremonies, she said. Those who were to stand on the front lines received training in non-violent protest and how to avoid agitating law enforcement.

On her third day there she got her first taste of tear gas. That day she joined dozens of protestors who traveled across a river by boat to Turtle Island, a few miles from the Sakowin camp, where some protestors drummed and sang while others shouted slogans. Eventually, she said, tear gas and a growing police presence led an elder to tell them to leave the island and head back for camp.

“We were reluctant to abandon our post but when an elder speaks you listen,” Casarez said.

Looking back on the experience, Casarez, who has an 8-year-old daughter, said the sense of community there was overwhelming. Leaving was tough, though she would go back if needed, she said. 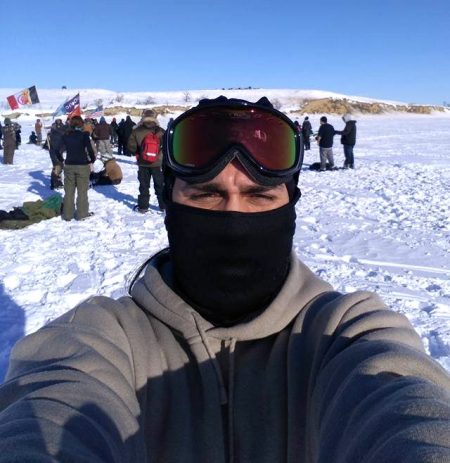 Milwaukee native Daniel Guzman is continuing to protest on the front lines at Standing Rock. Photo courtesy of Daniel Guzman.

Eele Curb, 23, who lives on the South Side, joined the protests in December. Curb sees parallels between the situation in North Dakota and the lead lateral situation in Milwaukee, which critics say has led to elevated lead levels in local drinking water. They assert that recent test results have determined that the lead levels at several Milwaukee Public Schools were dangerously high, though MPS officials and the city have denied that contention.

Curb and a friend took the trip to try to stop “poisoning of the rivers” by construction of the pipeline.

He spent most of his time in North Dakota shoveling — roads and at the homes of elders. Curb said he wishes he could have stayed longer than a week and is disappointed that in the end the pipeline might be built.

“Supposedly, now that the Trump administration has taken control, the pipeline will legally be allowed to be completed,” Curb said.

President Donald Trump’s Press Secretary Sean Spicer declined during a press conference Monday to “get in front of the president’s executive actions,” but added that there is an opportunity to increase jobs and economic growth in the Dakota pipeline area. He added that Trump is “very, very keen in making sure we maximize use of our natural resources to America’s benefit. It’s good for economic growth, it’s good for jobs, and it’s good for American energy.”

Still, Curb said, the sense of community that he and others from across the country shared at Standing Rock eases his disillusionment.

“When the rivers are poisoned and my kid asks me why no one did anything, I can say that so many of us did do something,” Curb said.