A Hard Reign of Prejudice Coming?

Trump could open door to discrimination against LGBTQ people. 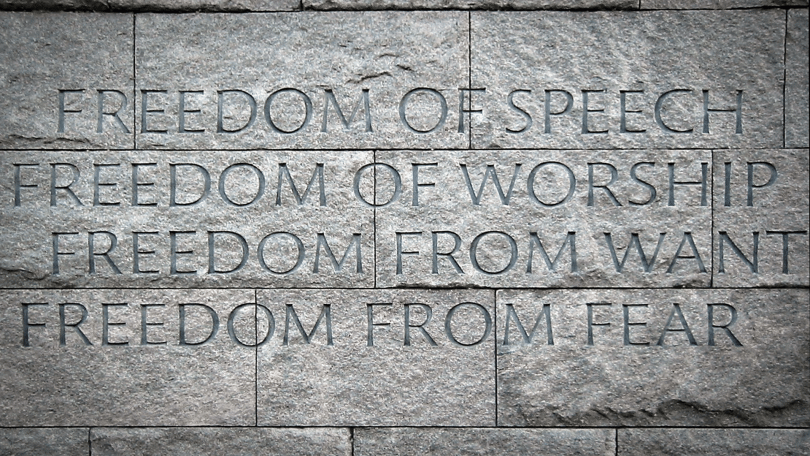 As I write this column, a dense fog has fallen over Milwaukee. It’s an appropriate mood for the murky future we now face.

Many Americans approached the inauguration of Donald Trump with anxiety and apprehension. People are worried: about the economy, about international relations, about healthcare, about decades of hard-won social progress being reversed, and for many reasons more. If there was any solidarity to be found this past weekend, it wasn’t at the Inauguration. It was found in streets across America, as millions of people joined the women’s marches in protest against discrimination.

After months of hearing we had nothing to worry about, we’re witnessing an unapologetically anti-LGBTQ presidential cabinet take shape. People with deeply exclusionary beliefs could soon manage every aspect of American lives — education, housing, transportation, health and human services, intelligence, justice – which could be devastating to the people they were appointed to serve.

We now hear people actually saying, “we don’t have to be politically correct anymore,” as if they’ve been excused from human decency. At the same time, our exiting president stated yesterday that LGBTQ civil rights progress will be impossible to reverse because American society has changed.

That’s true – to some extent. We now believe that normalizing discrimination isn’t normal. We expect our leaders, companies and community organizations to demonstrate fair and equal treatment to all citizens. Even the most noble of brands have experienced tarnish and turmoil for not living up to our expectations.

The Salvation Army is a perfect example. Founded in 1865 by Minister William Booth, the Salvation Army is a 501c3 non-profit serving 31 million people each year at over 7,500 branches nationwide. From every dollar, 82 cents are reinvested in community programs in every U.S. ZIP code. The year-end Red Kettle Campaign provides not only winter meal and housing assistance, but also year-round emergency services.

So, why has such a long-respected organization spent the 21st century defending its mission and purpose? Why has it been criticized on the right for its tolerance while simultaneously condemned on the left for its intolerance?

In recent years, the Salvation Army has struggled to reconcile its historic Bible-based message with a modern mission of meeting all human needs without discrimination. This is a religious organization that faithfully believes in the biblical definition of marriage as one man and one woman. At the same time, the organization states that no one will be turned away for identifying as LGBTQ.

That vision, however, has been somewhat inconsistent with the reality: 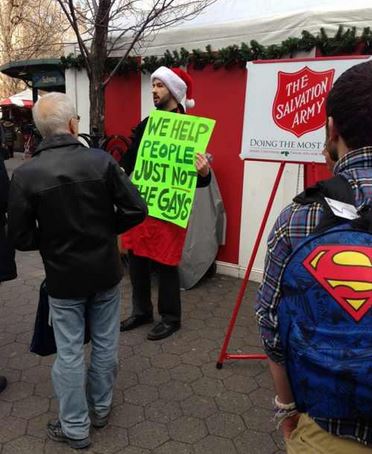 As a youth, journalist Bil Browning and his boyfriend were denied assistance at a Salvation Army shelter unless they agreed to break up. They slept on the street instead. There are reports of clients being rejected for being “sexually impure,” being sick with AIDS, or refusing to pray in exchange for assistance.

By ordinance, San Francisco requires city contractors to provide spousal benefits for same-sex and opposite-sex partners of employees. In 1998, the Salvation Army of the United States declined a $3.5 million city contract, resulting in a reduction of homeless and senior services. In 2004, the Salvation Army threatened to close homeless services in New York City for similar reasons.

In 2001, the Salvation Army attempted to broker a deal with the Bush administration to allow federally-funded religious charities to be exempt from anti-discrimination ordinances. The Human Rights Campaign responded, “Gays and lesbians are taxpayers, too… Their money should not be used by religious groups to fund discriminatory practices against them.”

Although the Salvation Army is opposed to the death penalty, abortion, assisted suicide and euthanasia, the leader of an Australian branch of the group implied in 2012 that gay people should be put to death. “Members do not believe, and would never endorse, a view that homosexual activity should result in any form of physical punishment,” responded the Salvation Army.

In 2012, a Vermont case worker from Green Bay, Wisconsin was fired immediately by the Salvation Army when she was found to be bisexual, on the grounds that her behavior was incompatible with the beliefs of the organization. Gays, lesbians and bisexuals can only serve if they remain celibate.

In 2014, Jodielynn Wiley sought refuge at a Dallas shelter after receiving death threats for being transgender. She was turned away after refusing to discuss whether or not she’d had full gender confirmation surgery.

After marriage equality laws gains in many states in 2014, the Salvation Army reminded officers (in a famously leaked memo) that they were prohibited from marrying same-sex couples at any time, or attending same-sex weddings in uniform. Either offense would result in immediate termination. The Salvation Army also joined evangelical leaders in declaring same-sex marriage a threat to religious freedom.

Last year, a high-ranking U.K. official stated that LGBTQ officers were still not welcome in the Salvation Army. “You could volunteer for us, you could come to our church services, but if you want to become a solider in the Salvation Army, you have to commit to what we believe,” said Commissioner Clive Adams.

By the 2014 holiday season, outrage had kicked into fourth gear. People began harassing the bell ringers themselves, not realizing that many were recruited from within shelters and were not Salvation Army policymakers. Online campaigns on NoRedKettles.com, Red Kettle Menace and Reddit made a deep dent into seasonal donations.

In response, the Salvation Army launched a public relations campaign confirming it was neither against LGBT people, nor funding anti-LGBT causes. “People who come to us for assistance will be served according to their need and our capacity to help – regardless of race, gender, ethnicity or sexual orientation,” reads the LGBT Community page on the Salvation Army website.

“Echelon’s main focus from Day One has been to create as much impact, awareness and goodwill as we can, with the most talented, committed and passionate members out there,” said Brandon Tschacher of Echelon Milwaukee, which launched in 2014. “It takes big dreamers combined with those willing to pound the pavement to get something done, our group is lucky to have a mix of both.”

Through events like Dinner in the Alley, Served, food drives and shelter makeovers, Echelon has become a progressive and positive front face for the Salvation Army organization. I applaud them for taking this stand.

We’re now seeing the group evolving and changing, and their efforts have paid off. Last week, the Salvation Army of Milwaukee County reported it raised $4.2 million during the annual Red Kettle Campaign – surpassing its annual goal through the hard work of 1,280 individuals and 30,000 hours of bell ringing.

The Salvation Army story shows how America has changed. We’ve become very comfortable holding brands, individuals, and non-profit organizations accountable for taking socially responsible and morally defendable actions. But imagine a world where there are no such accountabilities, expectations or guarantees. Imagine living in an America where the Bill of Rights is subject to individual interpretation.

That’s the goal of the First Amendment Defense Act, first introduced in June 2015, which literally grants the freedom to discriminate. The act would not only prohibit the federal government from taking action against anyone accused of discriminatory practices, but would allow the accused to sue the government for interfering with their right to discriminate. Valuing personal beliefs higher than the law of the land, this legislation would render civil rights laws unenforceable.  Corporations – regardless of for-profit or non-profit status – could essentially do whatever they wanted, invoking a mission statement defense.

The everyday lives of LGBTQ Americans, along with other minority groups, would be immediately destabilized. Whether applying for a home loan, interviewing for a new job, making a purchase in a local store, hailing a taxi, hiring a repair service, or even seeking emergency medical care or police protection, individuals would always have to wonder if they’ll be rejected due to some real or perceived “objection.”

This isn’t science fiction. This isn’t paranoia. This could easily become standard operating procedure. Certainly there are many members of the Trump administration who would support such an approach.

“The First Amendment Defense Act invites widespread, devastating discrimination against LGBT people,” said Jennifer Pfizer, law and policy director at Lambda Legal. “It is an unconstitutional effort to turn back the clock. Heads will spin at how fast constitutional challenges will fly into court.”

Twenty-five years ago, MTV asked “what happens when people stop being polite and start getting real?” I think we’re finally getting the answer.

10 thoughts on “Out Look: A Hard Reign of Prejudice Coming?”