Scott Walker, the King of Coal 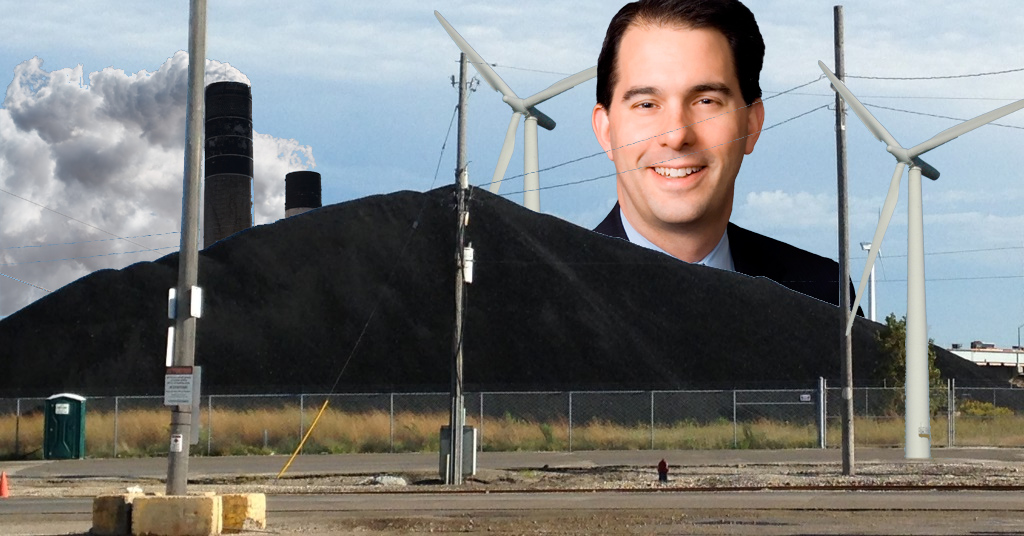 It’s 2017 now and the world is radically different that it was in 2010 when Scott Walker was elected governor, but you wouldn’t know it by his policies. His administration continues to have no interest in solar and wind power. Indeed the state now gets 63 percent of its energy from coal, up from about 55 percent when he took office. That’s largely because the Kewaunee nuclear power plant was closed, but it’s also because the state has been asleep on solar and wind power for six years.

Meanwhile the cost of these power sources have plummeted. “The average long-term contract price for wind power paid by utilities has dropped 60 percent since 2009,” Bloomberg.com reports. “The solar price drop has been even steeper, falling 65 percent.”

The picture isn’t much better for solar power where Indiana has 120 mega-watts of solar, Illinois has 57, Minnesota 27, Iowa 25, and Wisconsin has just 22 megawatts, ranking it ahead of only Michigan (18 megawatts). No Midwestern state has added less solar power, the Solar Energy Industries Association told Bloomberg.

“We’re behind,” says Tyler Huebner, executive director of RENEW Wisconsin. “The potential for alternative energy in Wisconsin is basically limitless. We have plenty of hills and spots where we can put up wind turbines. We have plenty of roof tops and plenty of land to put up solar panels.”

Wisconsin had begun to attract companies looking to do wind power, but a law passed by Walker and the Republicans in 2011 delayed any development for a year and called for a more stringent review. It sent a negative signal to wind companies, Huebner says, “and there’s been no state signal to counteract that and bring companies back,” he says.

Since then, the Wisconsin Department of Health Services review of the scientific literature has found no human health concerns with wind turbines, but there has been no movement by the Walker administration to embrace wind power.

Members of the state Public Service Commission appointed by Walker have been unfriendly to alternative energy. The PSC approved a plan by We Energies to charge a fee for homeowners installing solar power, which would have discouraged solar installation, only to have the courts overrule the fee.

Walker and Republicans cut the Focus on Energy program providing rebates for homeowners and businesses installing energy saving features, including alternative energy, slashing the annual funding from more than $4 million to just $2 million in 2011 and 2012. Since then the funding has been restored to its former level, a small bright spot.

“If you add up all the steps and all the signals coming out of the current administration, it’s not welcoming, that’s for sure,” Gary Radloff, a policy analyst at the Wisconsin Energy Institute, told Bloomberg. Wisconsin’s become “an island of renewable-energy stagnation amid a sea of growth,” he added.

The Walker administration has pointed to other forms of alternative energy it has backed, including “tax breaks and loans for biodigesters that create power from farm waste as well as small-scale generators that let diesel trucks reduce idling,” Bloomberg noted.

But the real action on the alt energy front is solar and wind, and the governor has been all but mute on the issue.

You might call Walker the King of Coal. Just nine states in America are more dependent on coal than Wisconsin and those tend to be states like West Virginia, Kentucky, Wyoming and North Dakota, which are big producers of coal. Wisconsin imports all its coal, importing pollution to this state and exporting potential jobs to coal producers while failing to grow home-grown alternative energy jobs.

That leaves Walker out of step with businesses that are embracing solar and wind power, including Wisconsin companies like S.C. Johnson, Rockwell Automation, Kohl’s, Sorim Company, Letterhead Press, O&H Danish Bakery and many others. Nationally, 71 of the biggest 100 corporations have launched renewable energy plans.

He is also out of step with his Republican base: the same survey found 60 percent of conservatives support support taking action to accelerate clean energy use.

But Walker’s positions are doubtless supported by the Koch Brothers, whose profits are generated by fossil fuels. And the Kochs have rewarded Walker with $5.6 million in campaign donations from 2010 through 2014, according to the Wisconsin Democracy Campaign, which tracks all donations to state politicians. That total is likely to grow when the group updates its numbers.

And Walker will need more such donations for his 2018 run for reelection and for a possible second try for president. As a result, alternative energy seems to be booming everywhere but here. When it comes to solar and wind power, Wisconsin is clearly not open for business.

31 thoughts on “Murphy’s Law: Scott Walker, the King of Coal”