The data is clear: Democrats must change strategies or they will never succeed. 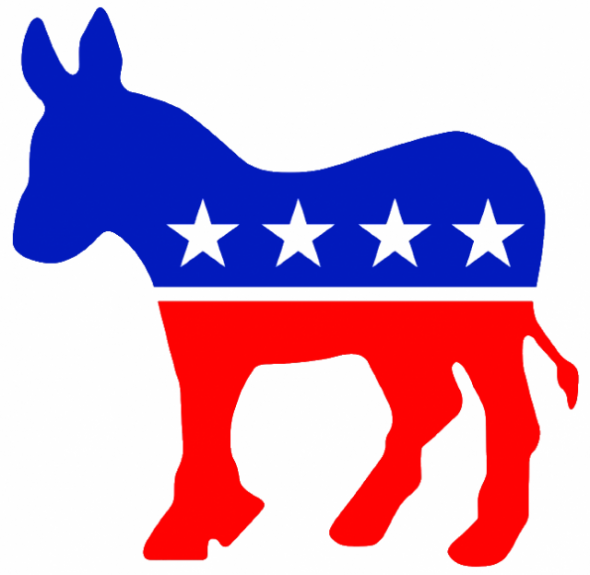 DemocraticLogo by Source. Licensed under Fair use via Wikipedia.

November’s election results make clear the challenges facing Democrats if they hope to regain a role in the Wisconsin decision-making process. Among these is a shortage of Democratic office holders with experience in winning competitive races, an assumption that history favors them, and a failure to respond to develop a plan to address the shrinkage of traditional jobs. Here are the major issues and how they might be confronted:

1. Lack of experience with competitive races.

The ideal Democratic candidate for a statewide office in Wisconsin is one who has already demonstrated success in a two-party race. But who is that candidate?

The “pack and crack” gerrymandering strategy used by Republican legislators to assure they would continue to control the legislature depends on packing an overwhelming number of Democratic voters into a few districts, allowing for a larger number of safe Republican districts. A side effect of this strategy is to create a large number of single-party districts.

One result is a shortage of potential Democratic candidates practiced in reaching out to independents and Republicans. Last November’s election only made this problem worse.

Of the 99 Wisconsin Assembly districts, 49 had candidates from only one of the major parties. Potential candidates from the missing party decided their cause was hopeless.

The effect is not symmetric, as can be seen in the following chart. Only seven Democratic Assembly members had a Republican opponent. 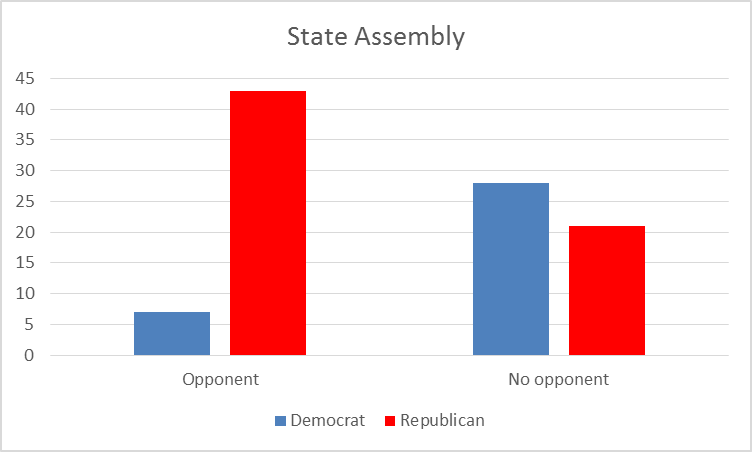 A similar—if not as extreme—effect shows up in the races for state senators. Of the sixteen senate seats up for election in November, seven were won by Democrats. Of these seven, only two had faced a Republican opponent. 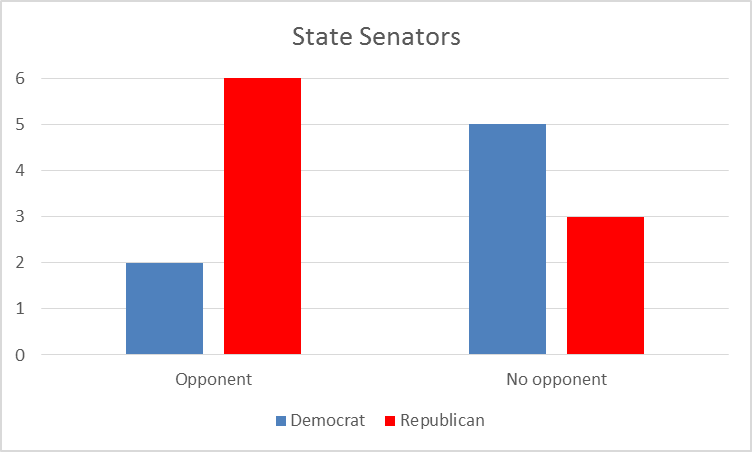 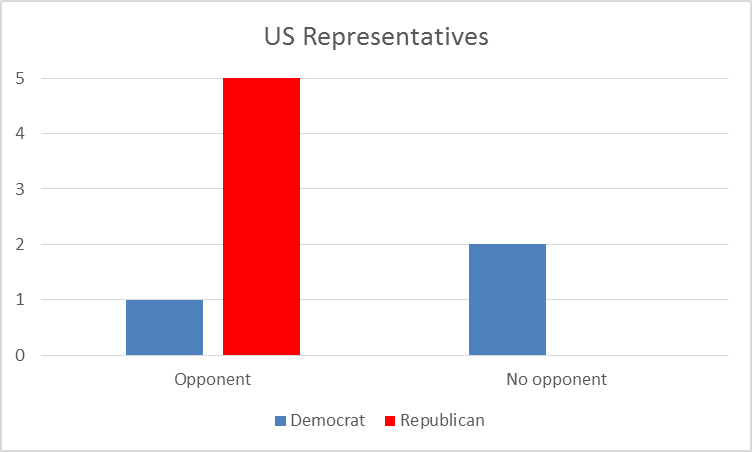 In looking towards the 2018 race for governor, there is a lack of Democrats likely to be successful. In part, this reflects the inward-looking effect of safe seats, where the outcome is settled in the partisan primary, rather than the general election.

2. Winning the gerrymandering lawsuit would not guarantee electoral success for Democrats.

Fighting the highly partisan gerrymander is good for the country. Allowing one party to entrench itself undermines democracy. The creation of numerous safe seats also contributes to increased polarization.

However, a victory in the lawsuit alone will not solve the Democrats’ problems. This is illustrated by the November election results.

Which party won the vote for the Wisconsin Assembly in the November election? With almost half the seats uncontested, one cannot simply add up the votes and declare a winner. Doing so would imply that there is no support in the district for the missing party.

Waukesha County illustrates the problem with this assumption. Its Assembly seats were among those uncontested by Democrats. Yet Hillary Clinton still managed to win about a third of the votes.

The approach I used to estimate the statewide vote for the Wisconsin Assembly started with results from districts in which both parties fielded a candidate. Then I regressed these district results against the percentage of the vote for Clinton in the same districts. This factor was applied to the Clinton percentage in the single-candidate districts to estimate what number of votes each party would have received if each had run a candidate.

There are a number of limitations to this estimate. For example, even in two-candidate districts, one might have been a much stronger candidate than the other. Likewise, either Trump or Clinton might have done particularly well or poorly in an individual district.

I used what is called the “Simplified EG.” The simplified version of the efficiency gap assumes all districts have the same turnout. Nevertheless, in my experience its results closely track the full version.

The simplified efficiency gap is given by:

Setting EG to zero and solving for S estimates that in a perfectly fair redistricting, Democrats would have won 47 percent of the districts or between 46 and 47 seats.

While this result would have been much better for Democrats than the actual outcome, it still puts the Republicans in control.

Although, as already noted, Democrats tend not to bother running candidates in Waukesha County, it is actually a major source for Democratic votes. In fact, as the next chart shows, it comes in third place among all Wisconsin counties as a source of Democratic votes.

This creates a major quandary for Democrats (and similarly for Republicans in Milwaukee). How do Democrats cultivate those voters and expand their number if no one wants to make a doomed run for office? 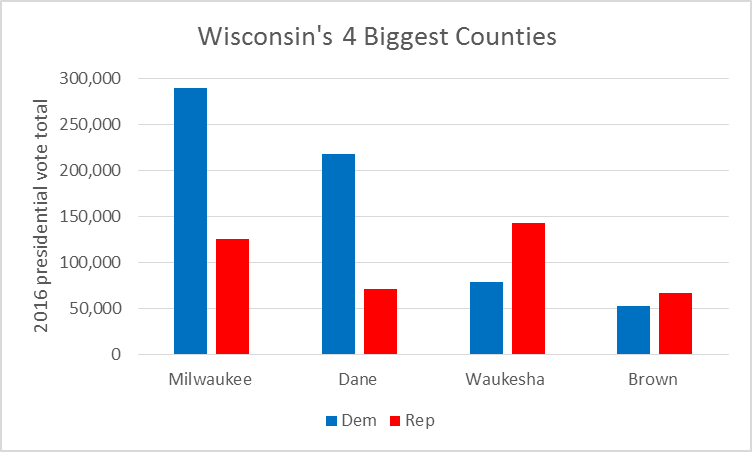 Perhaps one answer is that in looking for a possible candidate for governor, Democrats expand their horizons. Are there Democrats who ran and lost in places like Waukesha County, but did better than expected?

4. The Democrats’ hope that “something will come up.”

The legal effort against gerrymandering is not the first example of something expected to rescue Democrats. Wisconsin Democrats have a tradition of celebrating unhatched chickens. One had only to view the Journal Sentinel comment section to see the widespread confidence that Scott Walker would end up in jail. Or that assuring the right to vote to every citizen would be sufficient to swing elections.

While restoring Wisconsin’s reputation as a state that does not tolerate political corruption and making it easy for voters to vote are important causes, they are important in their own right, not because they would help one or the other party. Making them partisan issues only serves to devalue the cause.

In the last few years the predominant example of the “something will turn up” hope has been the expectation that demographic change will turn states blue. Growing numbers of Hispanics, blacks, and other minorities would lead to inevitable Democratic majorities, in this view, which has often been accompanied by a willingness to write off working class whites.

While working class whites—and those in smaller cities and rural areas—are a shrinking part of the electorate, they are still a very large part. Democrats in Wisconsin and other upper Midwest states were particularly vulnerable to their loss for two reasons: the fact that Democrats still had strong support from this demographic, unlike much of the South, and the slowness of the expected increase in minority voters in states like Wisconsin.

5. The lack of a credible Democratic plan for job creation.

Gov. Walker won office on the strength of his promise to create jobs in Wisconsin. As the next chart shows, while Wisconsin has added jobs during his term as the US recovers from the Great Recession, its economic performance has lagged both the US and that of similar Midwestern states. (To get the peer group of six states, I first chose Wisconsin’s four adjacent states—Michigan, Minnesota, Iowa, and Illinois, and then added two states with similar economies—Indiana and Ohio.) 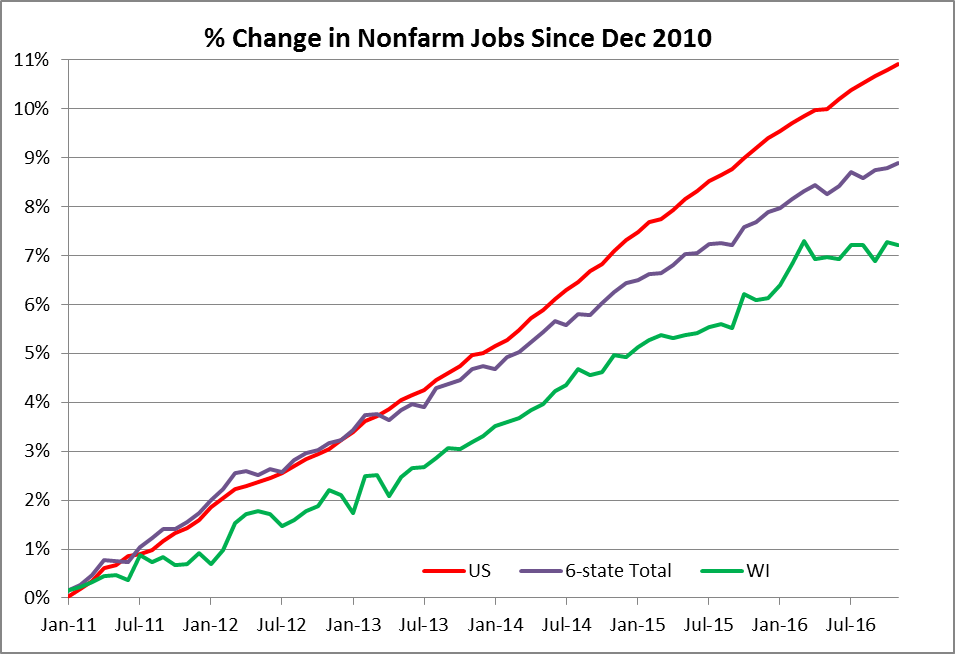 What is missing is a credible Democratic jobs plan. This leaves a sort of vacuum that is filled by either the traditional Republican plan based on reducing taxes and regulation or the Donald Trump version that includes reversing globalization.

Much of the Democratic agenda—including the Affordable Care Act, increasing the minimum wage, requiring parental leave, and increasing the earned income tax credit—can be regarded as aimed at limiting the pain of joblessness or making jobs better, but not creating jobs in the first place. One can be very skeptical of Trump’s plan to bring jobs by restricting imports, but where is the Democratic jobs plan?

For years, Wisconsin had a national reputation for good governance, including a vibrant two-party system. It is painful to watch that reputation being tossed aside.