The World’s Largest Shipper of Wheat

Two steamers, the Milwaukee and the Detroit, probably shipping wheat, 1867. 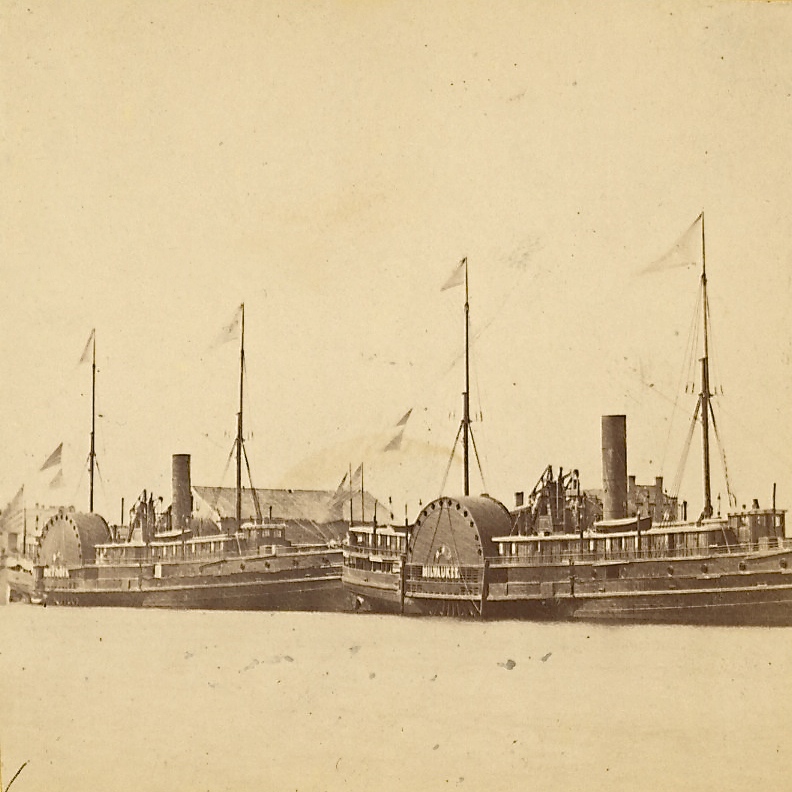 The Milwaukee River had become a busy place by the 1860s. By 1860, Wisconsin was the second ranked wheat-growing state in the country and from 1840 to 1880, its farmers grew one-sixth of the wheat grown in the United States. That helped Milwaukee became the largest shipper of wheat in the world. And the Milwaukee River and harbor was a place to transfer cargo from trains to ships.

Interestingly this view of two steamers is a railroad-related photograph c. 1867. The boats were called the Milwaukee and Detroit and both were commissioned in 1859 for the Detroit and Milwaukee Railroad. The two steamers were both built in Buffalo. “At the first glance at these vessels,” a story in the Buffalo Daily Republic marveled, “the first idea that strikes the beholder, is that of immense strength. They are a perfect mass of wood and iron, interlaced together, and no sea-going vessel was ever more powerfully built. We hazard nothing in saying that they are the most substantial and best built vessels, that were ever constructed in Buffalo.”

“The dimensions of the vessels (the vessels are twins] are as follows,” the story continued:

The frames of these vessels run up to the top of the bulwarks, rendering the actual depth of the vessel 17 feet. This alone is an element of great strength. In nearly all other steamers the frames run only to the guards, with a light bulwark. In the case of these steamers the bulwarks are part and parcel of the hull (having no guards but that which supports the shaft and wheelhouse,) and equally strong. The model of these vessels are perfect. With long sharp bows, armed with heavy iron plate, the center part of the bottom is broad. This gives the properties of great speed, added to light draught.

This “splendid new steamer” called the Milwaukee, a story in the Stratford (Ontario) Beacon noted, was built at a cost of $140,000, and presumably the cost was about the same for the Detroit. 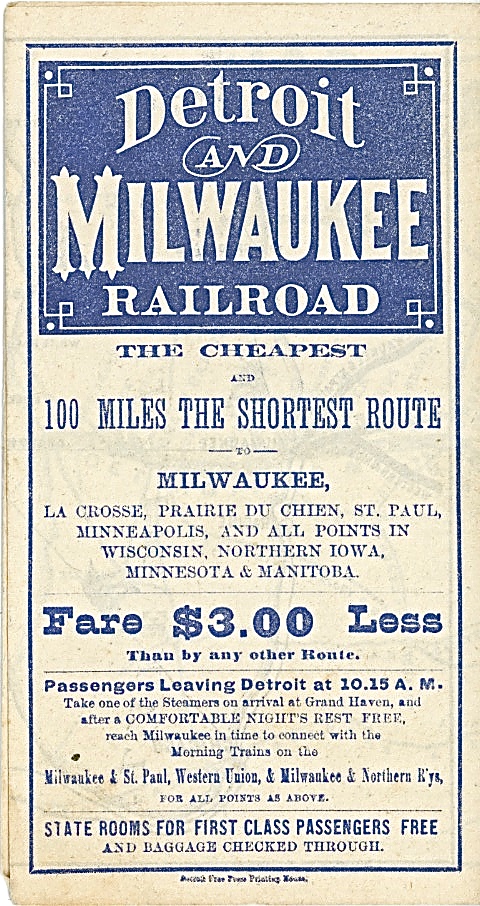 This illustration for the Detroit and Milwaukee Railroad dates from July 1872. Image courtesy of Jeff Beutner.

The boats would sail between Milwaukee and Grand Haven, Michigan where passengers would then transfer to a train to continue to Detroit. The railroad was founded in 1855 as a result of a merger of the Pontiac & Detroit Railroad with the Oakland and Ottawa Railroad.

The Milwaukee was the less fortunate of the two twin steamers. In November 1866 it would collide with the steamer Lac La Belle in the St. Clair River. The Lac La Belle would sink within two minutes (and was later raised and repaired only to sink in 1872; this time it was in Lake Michigan near Racine.) The Milwaukee would also meet a similar fate in October of 1869 when it would hit a sandbar at Grand Haven and split in two.

The Detroit had better luck, but in 1872 it was converted into a sailing vessel.

This illustration for the Detroit and Milwaukee Railroad, advertising a fare that’s $3.00 Less Than by any other Route,” dates from July 1872. The railroad entered receivership in 1875; in 1878 Great Western purchased it outright and refinanced the debts. The reorganized company bore the name Detroit, Grand Haven & Milwaukee Railway, which continued to operate into the late 19th and early 20th century.

One thought on “Yesterday’s Milwaukee: The World’s Largest Shipper of Wheat”