One of 11 most endangered, says National Trust for Historic Preservation, which could help rally support. 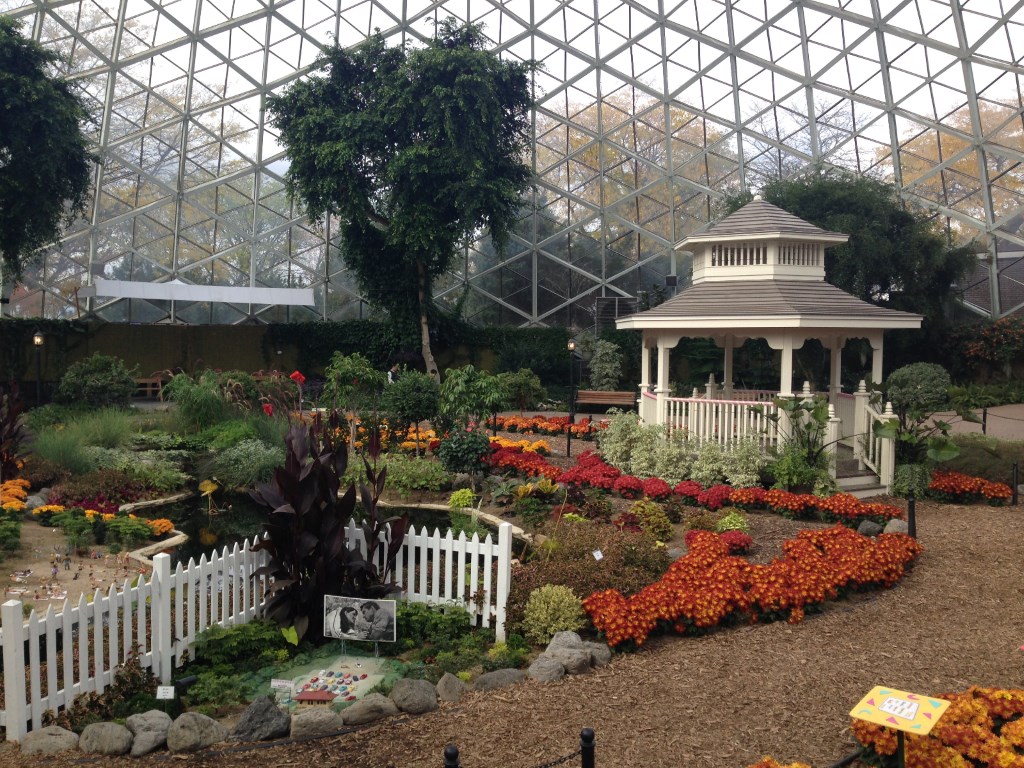 Prospects for preserving the iconic Mitchell Park Conservatory got a major boost today, as The National Trust for Historic Preservation named the attraction known as the Domes as one of its 11 Most Endangered Historic Places for 2016, a list it has promoted since 1988. The building comprises three cone-shaped horticultural glasshouses completed between 1963 and 1967, which have became a South Side landmark.

Genell Scheurell, Senior Field Officer for the National Trust’s Chicago Field Office, spoke at a press conference at the Domes this morning. She called them “stunning examples of midcentury architecture that have also been a key part of community life in Milwaukee for more than 50 years.” Scheurell said NTHP joined with the Milwaukee Preservation Alliance (MPA) in “urging Milwaukee County to find a solution that preserves the Domes for the benefit and enjoyment of future generations rather than needlessly sacrifice this unique national treasure.”

Dawn McCarthy, MPA president, sounded the alarm, noting that County Executive Chris Abele has “suggested that the Domes may have outlived their usefulness and could be demolished.” Abele’s spokesperson Melissa Baldauff says “The county executive understands that the Domes and what they represent are important to our community. He is committed not to a specific outcome, but to engaging the community in a thoughtful and deliberate planning process that results in a sustainable future for Mitchell Park.”

After pieces of falling concrete were found in the Domes the county temporarily closed the buildings to the public. The Show Dome and Tropical Domes have since reopened and the Arid Dome is scheduled to reopen by year’s end. The recent installation of metal mesh to prevent concrete from flaking and falling is a “temporary fix” project to last up to five years.

McCarthy also read a statement from Donald Grieb, Jr. of Houston, son of Domes architect Donald Grieb, formerly of Mequon. “As a child, I recall my dad building models of the domes of balsa wood and exploring alternate structural concepts after studying other famous domes such as the Panthenon and those of Buckminster Fuller. The final design became the world’s first glass conoidal domes.  He strove to create a structure that was light, efficient and soaring, that housed tropical, arid and temperate climates, affording year-round opportunities to experience these primary environments.  The design is not only unique structurally, but unique in terms of the glazing and water condensation and collection systems.  At the ripe old age of 98, dad is still proud that the Mitchell Park Domes have become a familiar Milwaukee landmark.”

Grieb also told McCarthy that “Dad still has pictures of the domes on the walls of his apartment.”

Scheurell said that hundreds of historic sites are nominated for the list every year. NTHP identifies “historic and important places across America that are threatened by neglect, insufficient funds, inappropriate development or insensitive public policy.” Chosen sites have included high-profile national parks such as the Grand Canyon, rural landscapes, urban neighborhood districts, Native American landmarks such as Acoma Pueblo’s Sky City in New Mexico, and 20th century sports arenas. The Milwaukee VA Soldiers Home is also on the National Trust’s list of endangered places. It was added in 2011. MPA worked in tandem with NTHP and other community groups to develop a path for preservation. It was announced recently that the City of Milwaukee and private developers will rehabilitate and restore Soldiers Home buildings for housing and other uses for veterans.

The only other Wisconsin site placed on the 11 Most Endangered list was Taliesin, Frank Lloyd Wright’s home and studio in Spring Green Wisconsin. It was named to the list in 1994 and a foundation has since preserved it as a tourism destination. Scheurell noted that of 270 sites named to the list over the past 29 years, fewer than five percent (13 places) have been lost, a sign of how successful the program has been in “galvanizing preservation efforts across the country.”

The other official speaker at the press conference was Sup. Jason Haas, chair of the county board’s parks, energy and environment committee. Haas said “this very significant announcement…should put the brakes on any talk about tearing down the Domes.” He called the National Trust’s call for preserving the Domes “a big deal,” noting that they are beloved by many people across Milwaukee County and Wisconsin.

He said Domes attendance had been steadily rising and was 240,000 in 2015, up from 187,600 in 2011. Haas also said the parks department needs to do more to promote the Domes as a tourist attraction because it is a unique draw and will bring more visitors to Milwaukee.

Haas charged that “County Exec Chris Abele is the person who started talking about tearing down the Domes, and he’s the only one who has promoted that idea.” He added, “Abele even suggested that we should replace the Domes with some ‘an amphitheater or a place where you could do big performances.’ because it ‘would be dramatic and probably a big draw.’ Well I think the Domes are pretty dramatic and a big draw as well.”

Haas is among those appointed to a Domes task force, which will explore long-term needs and repair options. The committee’s first meeting will be Wednesday, October 12.

Haas said he hopes Abele “will work with the County Board to fix and maintain the Domes for the next generation.”

Ian Bautista, executive director of the Clarke Square Neighborhood Initiative, told Urban Milwaukee that he thinks challenges facing the Domes are a “golden opportunity for the Milwaukee community to come together across neighborhood, racial and ethnic lines to build consensus” about stewardship of the attraction.  Batista would like to see more outreach to members of the largely Latino Clarke Square neighborhood as well as collaborations between neighborhood organizations and the Domes.

Longtime preservationist and retired history teacher Kathy Kean also attended and spoke to Urban Milwaukee about “reimagining the Domes.” Kean recalled many visits to the Domes with her children who are now adults. “We held my son’s birthday party here when he was about 10. We could not afford to travel south for a vacation but we made it a special tropical outing.”

Kean, who co-founded Historic Walker’s Point in the mid-70s, which evolved into Historic Milwaukee, Inc. has visions for the Domes as part of several well-linked destinations “in the middle of the city.” She would like to see more well-defined connections and cross-promotion among the Domes, the Urban Ecology Center’s Menomonee Valley center and the Hank Aaron Trail, which borders both.

Adrienne Pierluissi, owner of the Sugar Maple brew-pub in Bay View also attended the event, and told Urban Milwaukee, “I think national attention will increase a local appreciation for the Domes’ historic significance.” She hosted a well-attended fundraiser at her pub last spring to build awareness and support for saving Domes.

NTHP invites those who want to learn more about what they can do to support the Mitchell Park Domes and hundreds of other endangered sites at www.SavingPlaces.org/11Most  Those who favor saving the Domes are invited to sign a petition on the site.

In a statement, the National Trust called the Domes  “A beloved Milwaukee institution for generations, a unique engineering marvel and a highly significant example of midcentury modern architecture.”

As Urban Milwaukee has reported. The Cultural Landscape Foundation, another national nonprofit, also named the Domes to their “Landslide” program of “at-risk cultural landscapes” in March, and will continue promoting awareness about their status through ongoing updates.