Marine commerce thrived by then, but lost ships and passengers were not uncommon. 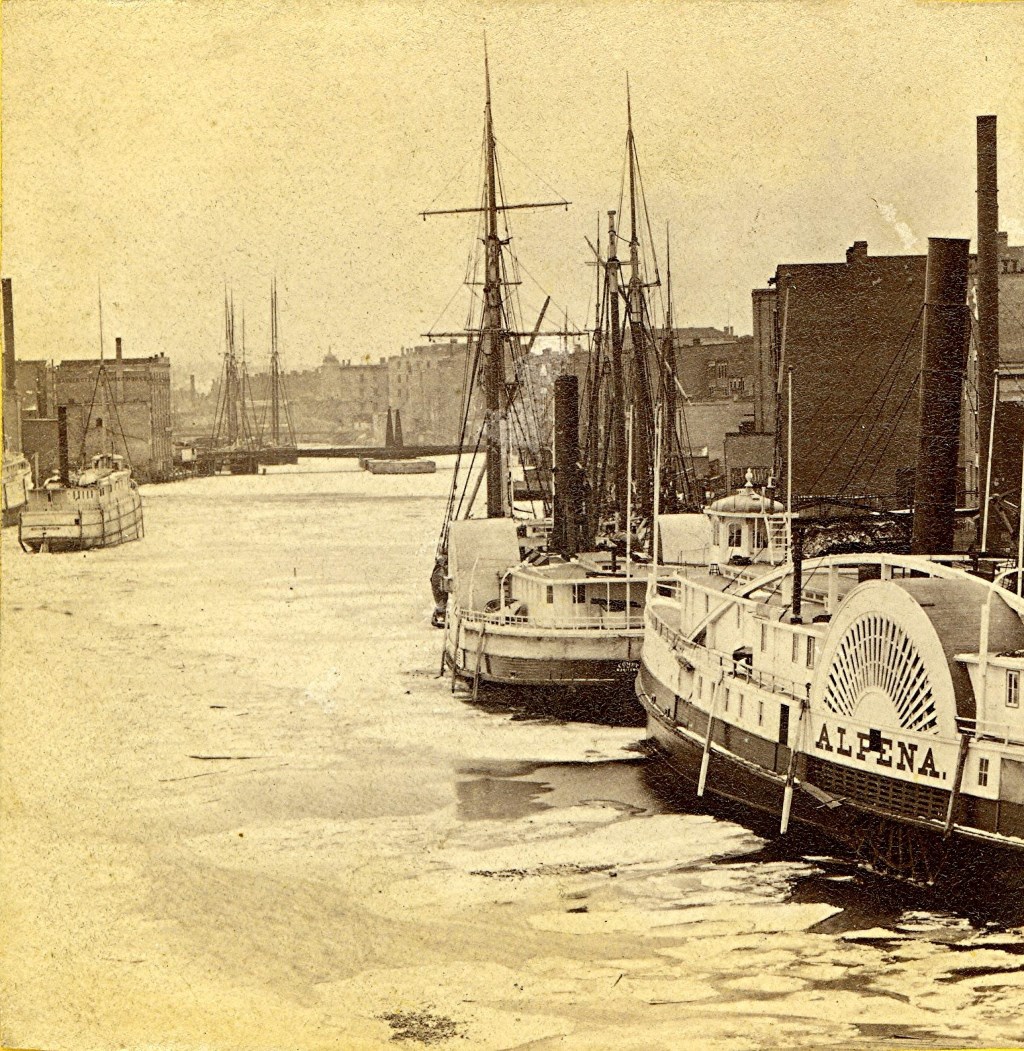 In 1857 there were harbor improvements made in Milwaukee in the form of a channel that created Jones Island and greatly increased shipping traffic as larger ships were then able to travel up the river. From the Humboldt Ave. bridge to the new mouth of the river maritime commerce would thrive.

This is a view dating from sometime before 1868. It looks north up the river from a site near what now is St. Paul Ave. The bridge is the Huron St. bridge (Huron is now Clybourn) which would be replaced in 1868. Many of the city’s older bridges were being replaced at this time.

Note the two different types of ships — sailing vessels and steamers. The first were used mainly for hauling freight while the steamers would also carry passengers. The two steamers in the foreground were the Alpena and the Comet. The Alpena was constructed in 1866 and the Comet in 1857.

Great Lakes shipping was very hazardous in the 19th century and both of these boats would have a fairly short life span. The Comet would be wrecked in Lake Superior in 1875 while hauling silver ore.

As one account notes, The Comet was “one of those ships afflicted with a proclivity to lucklessness. In 1865, she ran hard aground on a reef off Port Washington, Wisconsin. The Comet rammed and sank the Canadian steamer Silver Spray in 1869; she also rammed and sank the propeller Hunter later in that same year. Her own loss… came on August 26, 1875, when she was herself rammed by the Canadian sidewheeler Manitoba in Whitefish Bay, quickly sinking with the loss of 11 lives.”

This account, by the Great Lakes Shipwreck Museum, notes that a diving team discovered the remains of The Comet in 1970: “At a depth of 230 feet the Comet presents a serious challenge to any diver. Extraordinary skill is required to perform meaningful tasks at this depth. Further, the Comet presents a hazardous tangle of broken timbers and cables at its resting place in Whitefish Bay.”

As for The Alpena, it was acquired by the Goodrich Lines in 1868. The line was founded in 1868 by Albert Edgar Goodrich and merged in April 1868 with the Engelmann line, run by Nathan and Michael Engelmann. It was once the world’s largest inlake passenger carrier. The line was perhaps best known for the S.S. Christopher Columbus, an unusual whaleback steamer that would carry passengers between Milwaukee and Chicago.

The shipping line was involved in controversy. More than one Goodrich vessel was lost due to shipwreck. The SS Alpena was lost in October 1880 en route from Grand Haven, Michigan to Chicago, Illinois, and 80 lives were lost as a result. A subsequent investigation took the company to task for poor equipment condition and poorly trained crew.