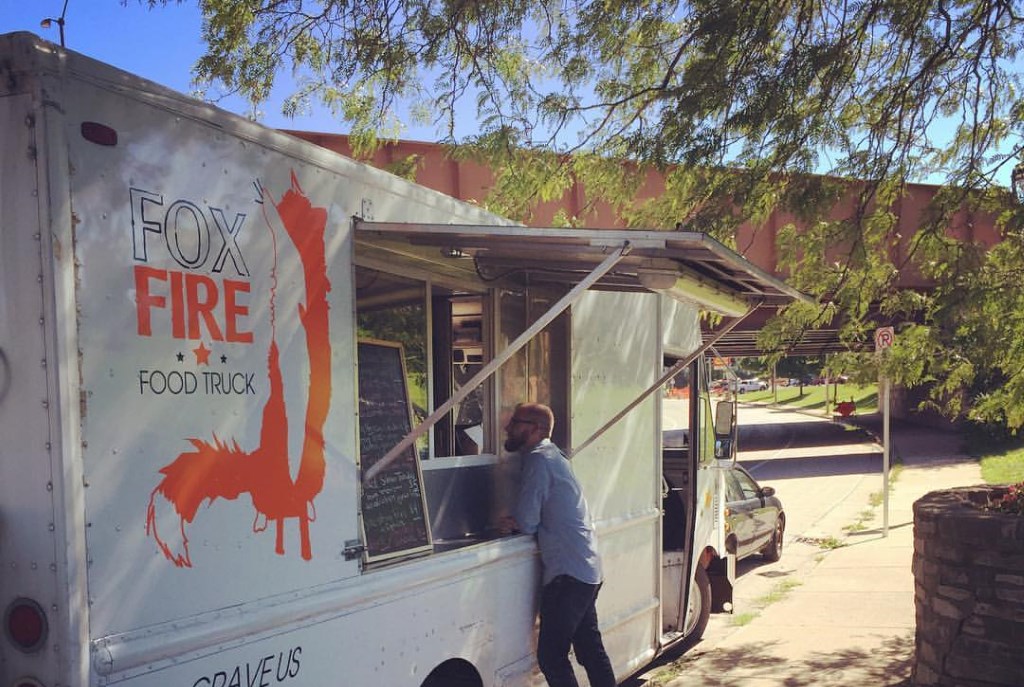 The number of food trucks in the Milwaukee area continues to increase. Recently, another one has rolled onto the scene by making an appearance at Morgan Park in Bay View. Fox Fire Food Truck is the idea of chefs Jacob Faber and Bryan Phillips, along with Jacob’s wife, Kari Faber. Jacob and Kari were originally inspired by the food truck culture when the two lived in Los Angeles. “On one corner, you could get your Mexican corn, and on another corner, you could find a papusa that was being made on an electric frying pan on top of a shopping cart,” said Jacob Faber. The truck will focus on serving high quality, seasonal comfort food cuisine. You can track down the truck on Facebook, Twitter or Instagram. Lori Fredrich of OnMilwaukee highlights the menu:

With an emphasis on fresh and local, Fox Fire will begin by offering a rotating menu of sandwiches ($8) and sides ($3-4), including fried brussels sprouts; shoestring potatoes; Mexican corn on the cob; a banh mi made with beef short ribs; a hot buttermilk fried chicken sandwich basted in spicy bacon fat; po boys featuring fried green tomatoes and shrimp; and tortas stuffed with traditional refried beans and Oaxacan cheese along with non-traditional ingredients like meatloaf and duck confit.

“We’d also love to offer larger format items that people could take home to feed their family for dinner or to take home for Packers games or gatherings,” says Phillips.

“We’re really looking to offer people an interesting menu that changes with the seasons, using things that look good at the market,” Jacob says of the menu. “We’re looking to push the limits of what you can get from a food truck.”

The owners of Jo-Cat’s Pub, 1113 E. Brady St., have purchased the building that is home to Mimma’s, an Italian restaurant that has operated on Brady Street for nearly three decades. Jeno and Lorenzo Cataldo bought the building from longtime owner Girolama “Mimma” Megna and now say the future of the restaurant is in her hands. Molly Snyder of OnMilwaukee has more details:

“She is important and integral to Brady Street,” says Jeno. “The ball is in her court.”

Jeno says he plans to meet with Megna next week to discuss options. “If she wants to stay, wonderful, but if she wants to retire, that’s fine, too,” says Jeno. “We have some ideas for the space if it becomes available.”

“I’ve never been more excited about a transaction than this one,” says Jeno. “I’ve spent my entire life standing on Brady Street porches, and so much time standing on Jo-Cat’s porch, looking at that building and wondering if we could ever own it. I feel like we now have the ‘Park Place’ and ‘Boardwalk’ of Brady Street.”

Eating healthy yet quickly is about to become much easier for Milwaukee residents. The Chicago-based food service, Kitchfix, was founded by chef Josh Katt in 2013 and is now coming to Milwaukee. Although home delivery is not being offered in the area, there will be six different locations Kitchfix will deliver your food. Melanie Lawder of the Milwaukee Business Journal has the scoop:

The company offers breakfast, lunch and dinner options that cost anywhere between $11 and $18 depending on the size of the dish, as well as snacks priced from $3 to $10. Customers can expect meals like paleo sloppy joe’s, paleo chopped ranch chicken salad, pecan maple salmon and Italian vegetable lasagna through Kitchfix.

“Up until today there’s been a noticeable void in Milwaukee when it comes to healthy and craveable meal delivery,” said Katt in a statement. “We’re excited to bring the same meals that we’ve been cooking in Chicago for busy families and professional athletes up north to the largest and healthiest city in Wisconsin.”

Milwaukee customers can order their meals online at Kitchfix.com and then pick them up at the following hubs in the region: Monkey Bar Gymnasium in Milwaukee, Crossfit Groundworks in Glendale, Badger CrossFit in Wauwatosa, CrossFit Greendale in Greendale, The Lift Pilates in Fox Point and CrossFit Menomonee Falls in Menomonee Falls.

Come November, FreshFin Poke could be serving up traditional Hawaiian dishes in Milwaukee. The restaurant would be found on the first-floor level of the Edge on North apartment building (1806 E. North Ave.). Nate Arkush and James Thomas are childhood friends hoping to open the restaurant and bring a new taste to the East Side of Milwaukee. If everything goes as planned, the restaurant would be open daily, including late night weekend hours. Carol Deptolla of the Milwaukee Business Journal describes what to expect at FreshFin:

Poke traditionally combines raw, cubed tuna with soy sauce and sesame oil or with spicy mayonnaise. At FreshFin Poke, the menu will have about a half-dozen different varieties of poke (pronounced poh-kay).

The restaurant also will have options for diners to customize their bowls, with a base of white or brown rice or mixed greens, topped with tuna, salmon, shrimp, tofu or seasonal vegetables that are mixed with a choice of sauce, such as ponzu, sesame-soy or spicy ginger.

Additional ingredients for the bowls could include items such as carrot, green onion, seaweed salad or avocado; some add-ons would be free, others would be an additional charge. Each bowl would be topped with crushed wonton chips or another crunchy ingredient of the diner’s choice.

Bowls will be available in two sizes, expected to be 8 ounces and 16 ounces, and prices would range from about $8 to $13.

This year marks the 5th Annual Silver City International Food and Art Walk hosted by the Layton Boulevard West Neighbors (LBWN). A press release announced the event will be held this Saturday, September 24 from noon until 5:00 p.m. on West National Avenue between S. 33rd and S. 35th Streets in Milwaukee. Dancers, musicians and artists will perform while the smell of fine ethnic restaurants fills the air. LBWN Community Outreach Manager for Silver City Gisela Ortega described the upcoming event as a celebration of the “cultural diversity of the Silver City neighborhood.”

Admission is free for all ages.

For more information, go to http://www.lbwn.org/ifaw.