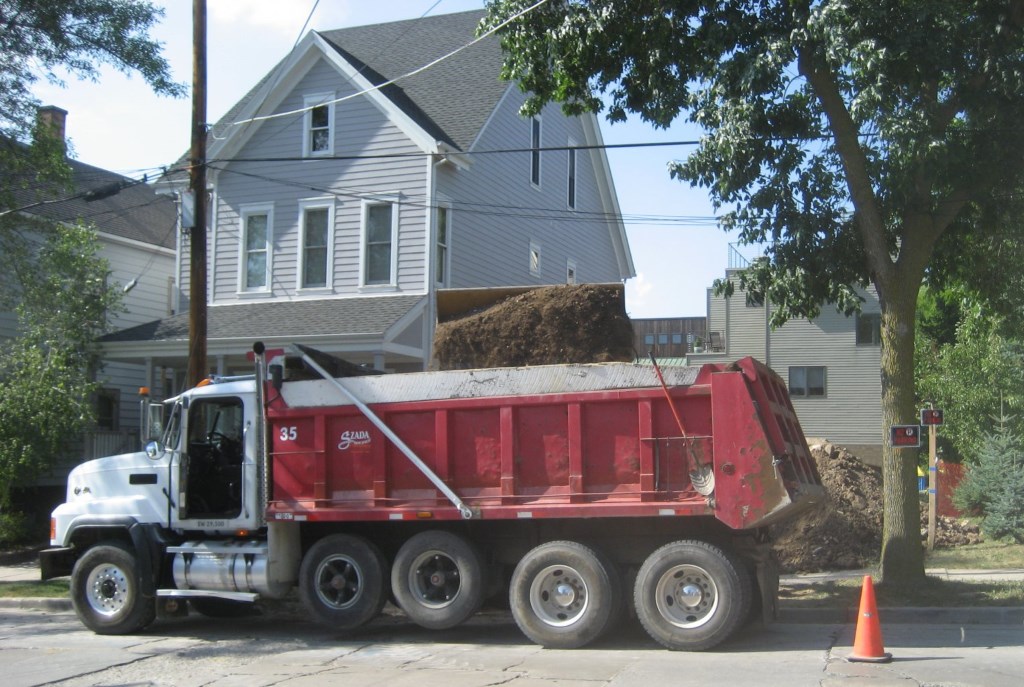 Construction has started on the last home in the Kane Commons development at 1170 E. Kane Place. Photo by Michael Horne.

The final piece of the complicated $4 million real estate jigsaw puzzle that is Kane Commons is under construction, eight years after the first structures in the 12-unit development were built.

A single family home at 1170 E. Kane Place is being constructed by Orta Construction, Inc. Over the past few weeks, crews working under the direction of Juan P. Orta excavated the tight site using mechanical equipment augmented with a good deal of muscle-powered shovels. Our photo gallery shows the progress of this work.

Kane Commons was proposed in the early 2000s by Julilly Kohler on a complicated site on the Milwaukee River. Two properties — one city-owned — had to be combined to create the development. Two buildings, a four-unit rear house and an old rear single family cottage, were razed in 2008. The city-owned lot was vacant, but had been the original home of what is now the Outpost Natural Foods Co-op. The lots were very deep, as a result of decades of fill being dumped to extend the lots to accommodate rear homes for the poor, which were built in the late 19th century. The neighborhood, originally Polish, had become the center of radical politics in the area, and was within the orbit of the late 1960-early 1970s drug culture, especially the hard stuff.

The centerpieces of the geothermal, green-roofed development were three large townhomes perched on the river, including a straw bale home, Milwaukee’s first, constructed for Kohler in 2008.

Two other single-family homes built then are in the middle of the lots, with a landscaped courtyard in between — the inspiration for the “Commons” in the project’s name.

Two homes fronting E. Kane Pl. were preserved. A street-front four-family was converted into a three-family condominium, while its neighbor next door, a former single-family home long ago converted into a duplex, remains a rental property. Another home was built on the street frontage in 2008, leaving the lot at 1170 E. Kane Pl. vacant until it was finally sold this year.

Most of the units were constructed as speculative “gray box” structures, outfitted with exterior finishes, windows, roofs, etc., but kept unfinished inside for the anticipated custom features that the eventual buyers would incorporate into their plans. (Did they ever!)

One courtyard unit was finished by Orta Construction, the current project’s contractor, and opened as a show house for the project. Senator Ron Johnson dropped by at one point as he was shopping for a house for his son. It was election season, and there were plenty of signs for Democrats in evidence. Johnson found a home for his son elsewhere.

The Great Recession slowed the marketplace, and it wasn’t until 2013 that the prime riverfront and courtyard units were sold, finished and occupied. There has been some turnover, but sales are brisk when units open up, and are often not advertised.

Construction of the homes posed a number of engineering challenges. The bluff of the Milwaukee river is extremely steep and unstable at this point, due to decades of fill that covered the original ravines. There was a considerable elevation shift on the lot itself. The site was a dump, quite literally, described by a contractor as “forty feet of foundry fill,” as said fill emerged from a test-drilling a decade ago. 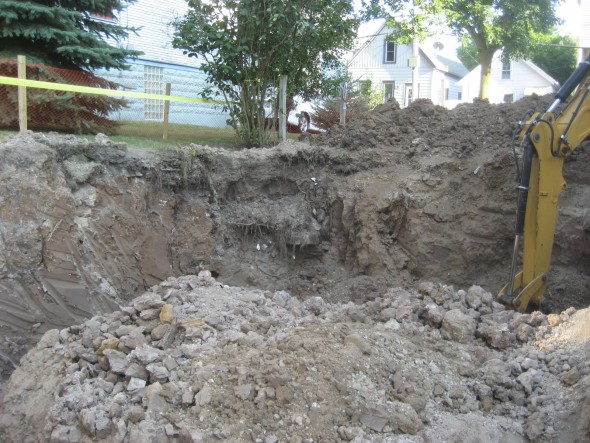 I was interested to see the character of the dirt for the final excavation of Kane Commons. “What lovely rubble awaits me?” I wondered.

To my great surprise, that which greeted me is something excavators call “virgin dirt.” Except for a few little pockets on the edges, where perhaps an old privy once was, the site was surprisingly — almost astoundingly — devoid of the usual debris often found in vacant lots in neighborhoods of great age and high density.

Instead, the excavators worked their way through solid glacial clay, which required no bracing as the excavation deepened. The pickings were slim, but the Orta folks rescued a stoneware beer bottle from the Grisbaum and Kehrein Brewery that had been buried for at least 126 years. I cleaned it up and presented it to the new owner.

Puzzled at the pristine soil conditions, I consulted maps from 1894 and 1910. While they show the expected density of the neighborhood, and a rear building labeled “tenement” (my old home), apparently the site now under construction has never held a permanent structure until now, although there was one behind it that disappeared at least a half-century ago.

We’ll follow this project as it gets out of the ground. There are only two empty riverfront lots remaining on E. Kane Pl., and each would be a challenge to development. There are plans to tear down and redevelop a riverfront duplex on the street. Three units on two properties have recently sold, and there is a five-unit property currently for sale along the river.

Lots of activity. The Great Recession is long past us. 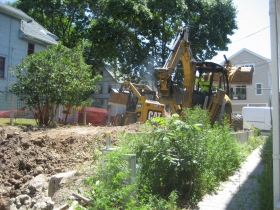 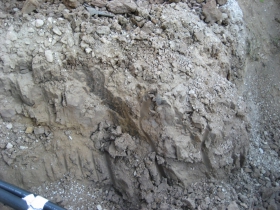 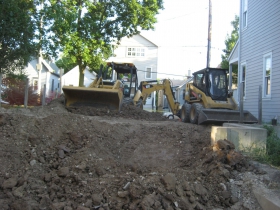 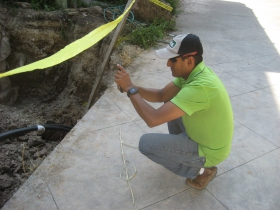 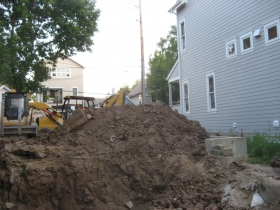 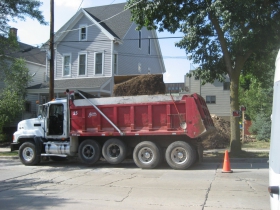 16 thoughts on “Plenty of Horne: Last Site at Kane Commons Getting Built”