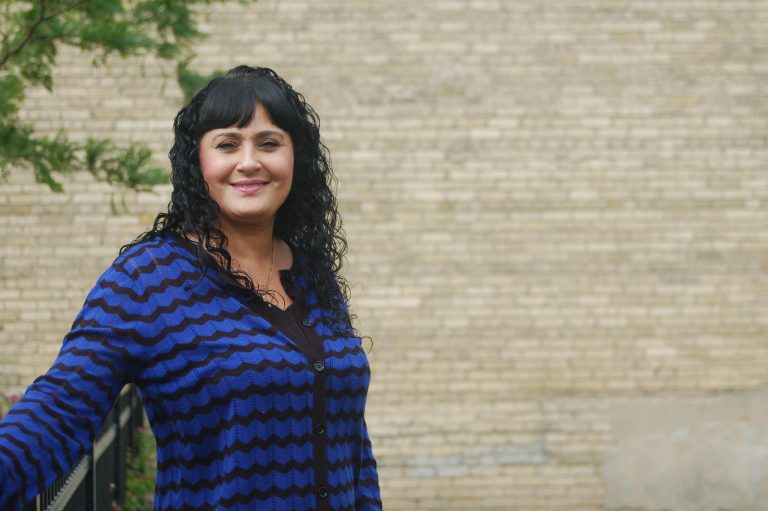 When Paula Jones, an artist and writer, moved to the Historic Mitchell Street neighborhood on the South Side from Wauwatosa last year, one thing that stood out to her is that the vibrant neighborhood has few green spaces for neighbors to congregate.

“Here we are in the heart of the city but there’s not a lot of places for neighbors to meet and form bonds,” said Jones, a member of South Side Neighbors Helping Neighbors (SSNHN), a resident committee formed by organizers from the Building Neighborhood Capacity Program (BNCP).

After months of going door to door to drum up resident support, placing calls to city officials, including Alderman Jose G. Perez, and applying for grants, the group secured a location for a mural and green space on the corner of W. Forest Home Avenue and S. 13th Street.

Ernesto Villarreal, who runs a Supermercado El Rey on the southwest corner of the property, donated an unused parcel of land and facade where the mural and green space will be located.

The first community input session for the project will be held Saturday, June 18, at St. Anthony Keyser Hall, 1730 S. 9th St., from 11 a.m. to 1 p.m. There, residents will discuss ideas for the project, including what message they’d like the mural to convey and what amenities they’d like to see populate the green space. Four more meetings will be held in upcoming months to involve residents in each step of the process, said Jones, who chairs the arts and education committee for SSNHN. South Side artists Tia Richardson and Jeanette Martin have been chosen to paint the mural, Jones said. 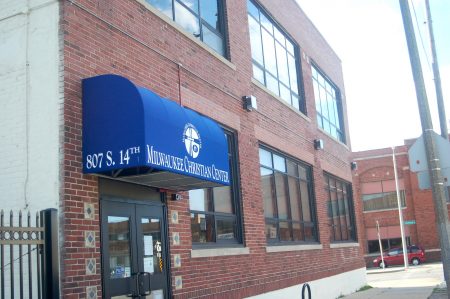 Milwaukee Christian Center, located at 807 S. 14th St., serves as the anchor agency for the South Side BNCP. Photo by Edgar Mendez.

The resident-driven project is exactly the type that BNCP organizers hoped for when they began outreach efforts on the South Side in October 2014, according to Juanita Valcarcel, BNCP site coordinator for Clarke Square, Muskego Way and the Historic Mitchell Street Neighborhood.

“When we came into the community, we asked residents what their concerns were and most said safety and neighborhood appearance and beautification. Then we asked them, ‘what would you like to see done and how can we help you,’” Valcarcel said.

The philosophy of the federally funded BNCP program, which also has sites in the Amani and Metcalfe Park neighborhoods in Milwaukee, is to build community capacity and spur resident-driven projects by organizing, providing information and connecting residents with local resources and organizations. BNCP has spurred several successful efforts in those neighborhoods, including the rebuilding of Moody Park in Amani and increased resident engagement in Metcalfe Park. The federal funding for BNCP has been supplemented in Milwaukee by grants from local organizations including the Northwestern Mutual Foundation, Next Door Foundation and Zilber Family Foundation.

Federal funding for BNCP will end Sept. 31, according to Karen Higgins, executive director of the Milwaukee Christian Center (MCC), located at 807 S. 14th St. MCC serves as the South Side site’s anchor agency and will continue to work on sustainability efforts for the program going forward, said Higgins, who added that the program has enough funding to continue into 2017 though it’s not clear how long.

Higgins praised BNCP efforts in the city, especially in the Muskego Way neighborhood, which she described as somewhat isolated from social service agencies.

“Without the BNCP serving the neighborhood there would be no anchor agency to advocate for their needs around safety and beautification, and willing to help them find tools to address their concerns,” Higgins said.

Still, it’s not easy to reach or engage residents in Muskego Way or other neighborhoods, admitted Valcarcel, who said that most neighbors don’t know each other nowadays. That’s why the work begins on the ground, said Valcarcel, who joins part-time BNCP staffer Arlene Gonzalez and resident volunteers from SSNHN to knock on doors of homes and area businesses, handing out resource packets and trying to encourage some of the more than 35,000 residents BNCP serves to take the lead in creating the neighborhood they want.

“’It starts with us,’ I tell them. Together we can unite and make a difference if we work together,” she said.

Efforts to mobilize neighbors have included area cleanups, meetings where residents have voiced safety concerns to law enforcement officials, block parties, ice cream socials and dinners in each neighborhood. These events give residents a chance to break bread and form bonds, Valcarcel said.

Jones envisions the green space and accompanying mural as another way to connect residents, and hopes it’s just the beginning, rather than the end, of BNCP-supported projects. She said she’s concerned about the long-term future of BNCP. She credits BNCP organizers with providing the framework to create projects such as the mural and green space and said she hopes that private sector funders will step in and fill the void left when federal funds cease.

“I’d love to see BNCP support of residents continue. We have so many great ideas left to turn into realities,” Jones said.