By Andrea Waxman, Milwaukee Neighborhood News Service - May 5th, 2016 10:32 am
Get a daily rundown of the top stories on Urban Milwaukee 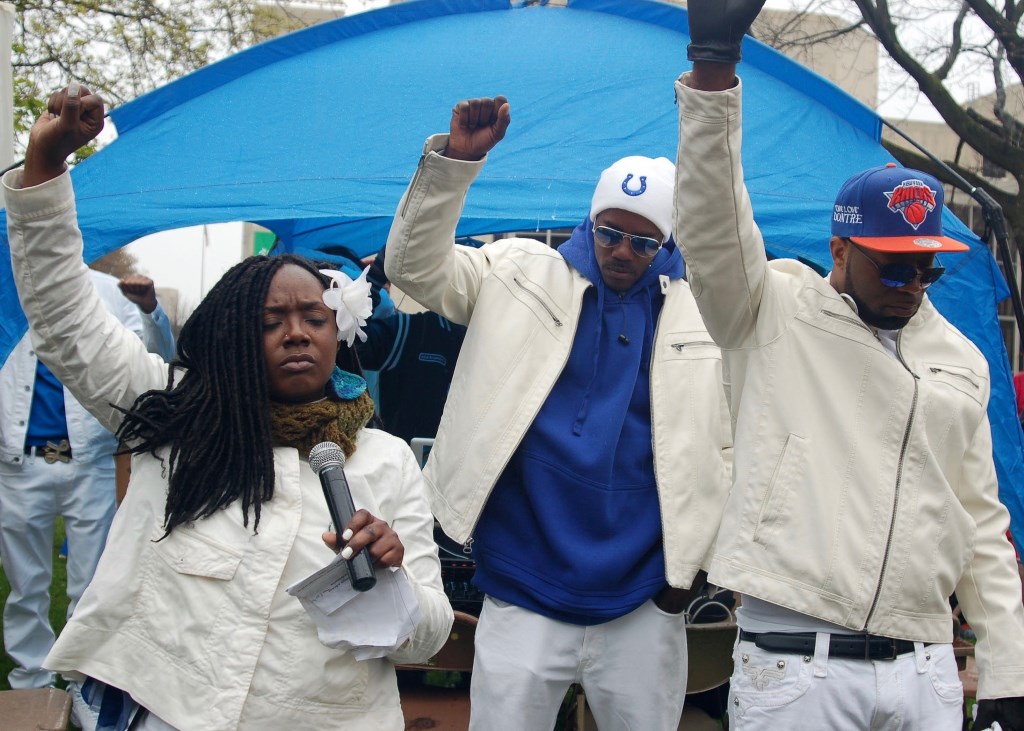 (From left) Markasa Chambers, a member of the Coalition for Justice, and brothers Nate Hamilton and Dameion Perkins lead supporters in 14 seconds of silence, symbolizing the 14 bullets that felled Dontre Hamilton two years ago. Photo by Andrea Waxman.

Nate Hamilton, one of Dontre Hamilton’s brothers, said he forgives Christopher Manney, the former Milwaukee police officer who shot and killed his brother on April 30, 2014.

“I forgive you for what you did, whether you’re wrong or whether you’re right,” is what Hamilton would say to Manney if he had the opportunity to talk to him “one-on-one in a safe space,” Hamilton said.

Calling himself a God-fearing man, Hamilton said it was not for him but for God to judge Manney. “We continue to pray for his family,” Hamilton added.

Hamilton made his comments after addressing supporters in Red Arrow Park at the second annual Dontre Day, a gathering to commemorate the killing that took place there. Part of the crowd had marched to the park in a cold rain with the Hamilton family from 27th and Center streets.

The Hamilton family filed a federal civil rights lawsuit against the city and former police officer Christopher Manney last week. The suit alleges Manney “unlawfully detained, unreasonably searched and then subjected (Hamilton) to excessive force” that led to his death. It further charges that this occurred “as a direct result of the unconstitutional policies of the City of Milwaukee.”

After Hamilton addressed the crowd, emphasizing the community’s responsibility to participate in building peace, the event took on a lighter mood. Art activities, bubble blowing, music, praise dancing and food-laden tables entertained attendees from around the city and surrounding area.

The Hamilton family is focused on changing police procedures in the African-American community, especially those concerning citizens with mental illness.

“White people have to talk to white people about inequality. It’s not up to African- Americans to teach us. We need to educate ourselves and each other,” Shaw said.

Maria Hamilton, Dontre’s mother, said that police practices have not changed much in two years. But she’s not giving up.

“We decided that we’re going to be vocal. We’re going to continue to stay in the streets until they stop killing people in Milwaukee,” she vowed.

Noting that she is working with mothers who have lost sons in police shootings around the country, Maria Hamilton said that it’s important to keep those stories in front of the public to get leaders to “step up and do the right thing and start … helping us change legislation.

“We’re not animals. We deserve to have a right to live … and work, love our kids, nurture our children without being in jail, without having to fight to earn a decent living,” Maria Hamilton said.

Hamilton family members plan to invest any money they receive as a result of the civil rights suit into building the community. They want to create opportunities to put young people to work “because they want to work and there are no jobs. We want to nurture them and teach them life skills and give them values and goals,” Maria Hamilton said.