By Jon Peacock, Wisconsin Budget Project - Apr 22nd, 2016 11:24 am
Get a daily rundown of the top stories on Urban Milwaukee

Income inequality has been on the minds of many voters during the presidential primaries. If you think it’s only a concern of Democrats, take a look at the results of the most recent “Wisconsin Survey” – a St. Norbert’s poll conducted for Wisconsin Public Radio and Wisconsin Public Television. The survey last week of 616 registered Wisconsin voters found that 66% favor “increasing taxes on wealthy Americans and large corporations in order to help reduce income inequality in the U.S.,” compared to only 28% who said they were opposed.

There are lots of different ways to adjust taxes (and labor policy) to reduce income inequality. Unfortunately, most of those – such as closing corporate tax loopholes and increasing the minimum wage – have little chance in Congress right now. But one promising policy option that does have a chance is to provide a significant increase in the Earned Income Tax Credit (EITC) for adults who don’t have dependent children. That idea has been endorsed not only by President Obama, but also by House Speaker Paul Ryan. 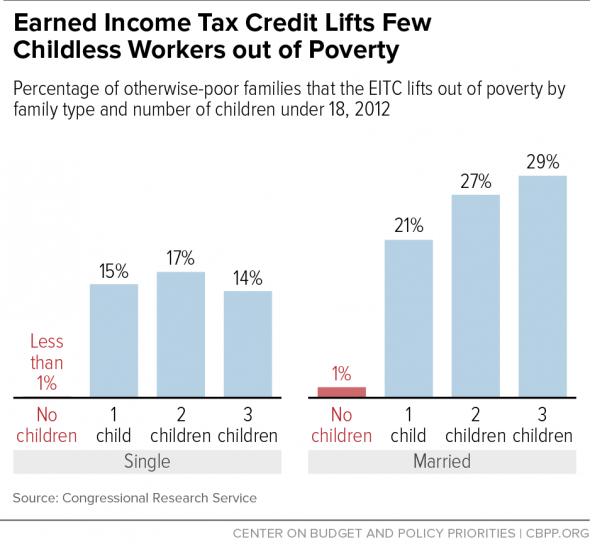 The bar graph, which was prepared by the Center on Budget and Policy Priorities (CBPP), examines the effect of the EITC for adults with income below the poverty level. It illustrates that for married couples with children, the current federal credit lifts more than 20% of those families above the poverty level. But for childless married couples, it only lifts about 1% of those households above the poverty level, and even less for unmarried childless adults. In fact, in 2014 the federal tax code taxed more than 8 million childless adults into poverty or deeper below the poverty line. A recent blog post provides this example:

“Consider a 21-year-old man just entering the labor market and making poverty-level wages (about $12,500 in 2016) on a construction site. He has $956 in payroll taxes deducted from his paycheck and pays $214 in federal income taxes. Because he receives zero EITC, he’s taxed into poverty.”

Speaker Ryan and President Obama have both endorsed proposals that would help make work pay for childless adults by increasing the EITC. They have different ideas about how to pay for it, but that shouldn’t be an insurmountable problem. (Here in Wisconsin we don’t have an EITC for childless adults, but Rep. Zepnick has proposed legislation, AB 434, to extend the credit to those adults.)

Voters want politicians to change the tax code to reduce income inequality. No single step will cure the problem, but a great place to start during the current Congressional session is to increase the federal EITC for childless adults.