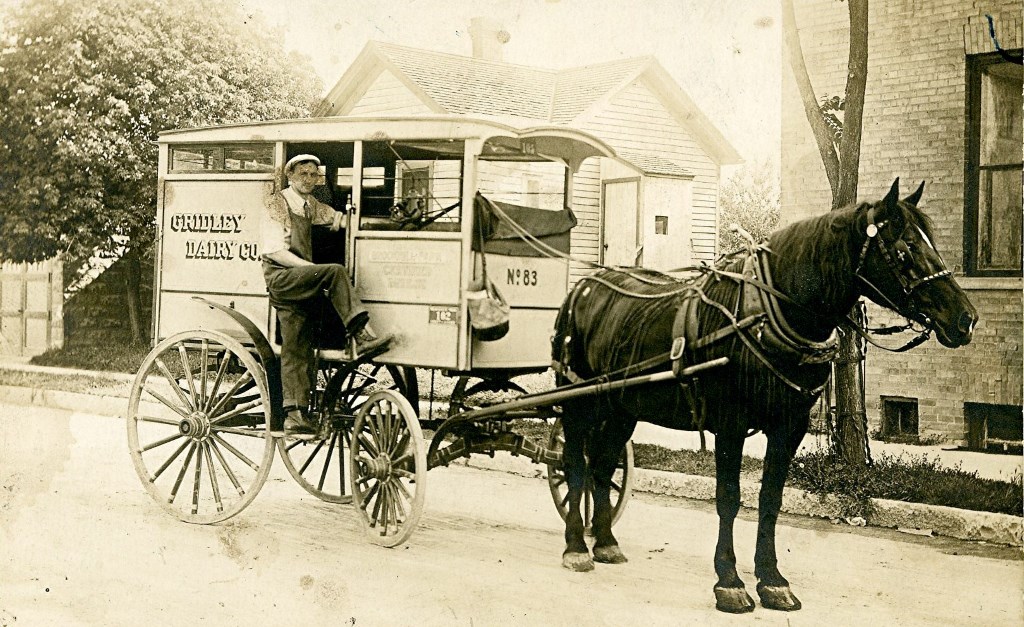 Even after the arrival of the automobile in the first decade of the 20th century trucks were slow to replace horse-drawn wagons that were used for delivery. The was especially those used for milk delivery as refrigerated trucks would become affordable only later. So wagons like this one of the Gridley Dairy were a common sight in the first part of that century.

This photograph is from a postcard (c. 1908). The exact location is unknown.

This was the era of the icebox – home refrigerators that would use blocks of ice for cooling. The ice would be harvested from nearby lakes and the ice stored in large ice sheds. One of the largest area harvesters was at Okauchee Lake. But by the 1930s refrigerated trucks would replace these picturesque delivery wagons.

The Gridley Dairy was founded in 1897 and its headquarters was located on 8th St., a block south of Wisconsin Ave. The company built a three-story, brick-and- concrete milk processing and bottling building in 1909 at 600-620 N. 8th St. The architect for that building was Leenhouts and Guthrie. The dairy was one of the largest in the city.

A text-heavy advertisement about the company that ran in the Milwaukee Journal in November 1928 noted that the Gridley Dairy’s milk came from 30,00 cows and it was the state’s largest manufacturer of sweet cream butter, producing more than 4 million pounds in 1927. The company had paid out more than $10 million in the past 12 months, the story noted, to its more than 1,000 employees and more than 3,000 owners of dairy herds “furnishing the Gridley Milk which “Keeps Milwaukee Healthy.'”

Gridley Dairy lasted until 1942 when a much larger rival (Borden’s) would purchase it. For some years Borden’s produced bottles of milk labeled “Borden’s Gridley Division.”