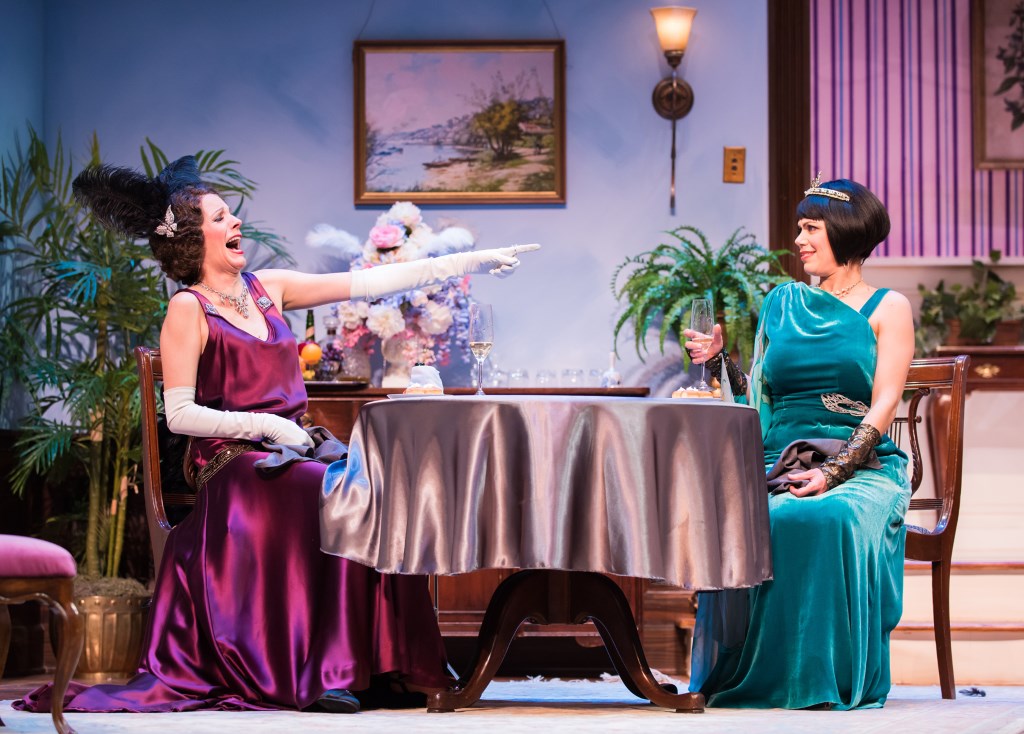 Over his eminent theatrical life, Noel Coward (1899-1973) epitomized class in many fields: cutting wit, musical compositions, debonair dress and a nearly endless supply of what many critics called featherweight comedies. The revival of Fallen Angels through May 1 — set in the perfect jewel for such display, the Cabot Theater — proves something else. Lighter than air involves facility of characterization. Not a featherweight skill.

Coward at his best delights in dissecting the modern British marriage of the 1920s, contrasting its social decorum with the female desire to escape into sexual romanticism. The men in Coward’s world are too busy golfing and drinking to express similar impulses.

Coward inserts the potentials of passion and adultery into this complacent but elegant propriety. The London flat and useful doors created by scenic designer Maureen Chavez-Krug are the ideal geometric environment – Victorian giving way to Art Deco — as Jason Orlenko’s costumes flow by like a delicious runway parade of the times, from everyday smart set to nightlife mania. Music of the era furthers the mood.

The mad passion, or at least commentary while passion is being contemplated, involves wives Julia and Jane building themselves into hysteria because a pre-marital French flame is about to re-enter their lives. This leads to pledging open tolerance between them about Maurice — their mutual Franco-stein attraction — and then getting down and dirty over who will break the pledge.  (The language is tame to modern ears but was called vile and low at the time.) Tipsy leads to catfight – and then the husbands and the Frenchman walk in as confessions unfold.  Participating as a know-it-all of galloping annoying efficiency — and fortissimo outbursts on the piano — is the maid, Saunders, played here with the delight of a clown turn in a British music hall by Molly Rhode.

Indeed the level of styling from director C. Michael Wright is a constant tightrope on the edge of burlesque.  As Saunders, Rhode carries the stylistic tone in a role expanded by the director, almost as if the playwright himself was reaching into the proceedings to point out the fun.

The cast is performing Wright’s commands impeccably. Every move Kay Allmand makes as Julia is a master class in period posturing and tonal scales while Beth Mulkerron as Jane is an earthier, bubble-headed, lower key modulation of similar desire and frustration.

It is a professionally timed ping-pong match that unfortunately doesn’t throw away a single line of dialogue. Wright makes sure they work as contrasting types – Julia constantly balletic and Jane more like an Irish clogger. But Coward’s ability to start with natural characters and build toward burlesque, a form he admired, carries a danger. It is easy to overlook how clever but imitative of everyday life his dialog can be.  Productions get tempted to encourage directorial comment by the actors and artificial enhancement of moments that should flow without the shticks and spit takes. So these actors are doing well what they should have been pulled back from.

More successful, since the stodginess of their personalities and weekend golfing costumes lend a lower key humor, are the husbands. Rick Pendzich is particularly successful as Julia’s understandably outraged Rick, while Chase Stoeger plays another variation — Willie, a dullard comfortable in his dullness as he slowly takes in Jane’s deception. As Maurice, the object of the ladies’ affection, Matt Koester arrives in time to preen and hand-kiss. He is the plot’s excuse for an invented morality to rescue Julia and Fred and Jane and Willie from the wagging tongues of British society.

Fallen Angels has seldom been seen professionally hereabouts. The same director led a version 15 years ago at the Next Act Theater and the nascent Milwaukee Rep at the old Fred Miller stage offered a version in 1961. The rarity is a signal of the difficulties of dancing between farce and character study as the comedy unfolds. The Coward method is daunting in how to keep bubbles aloft without landing hard on the knowledge of human behavior he exposes within the bubble.

The Milwaukee Chamber Theatre has gotten the surface look and pace pat in a way that will amuse audiences. Some may think the skill of the performers is holding up an outdated vehicle. But the witty observations about mankind within Coward’s best work haven’t been teased out in this production. 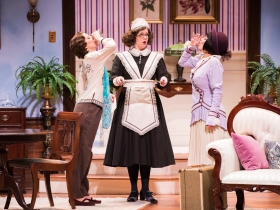 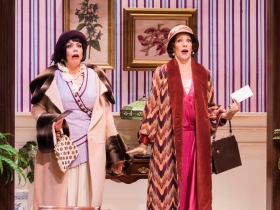 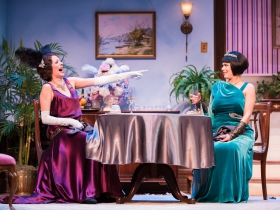 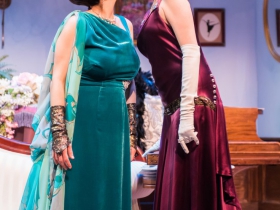