The Full Magnificence of a 1916 Home 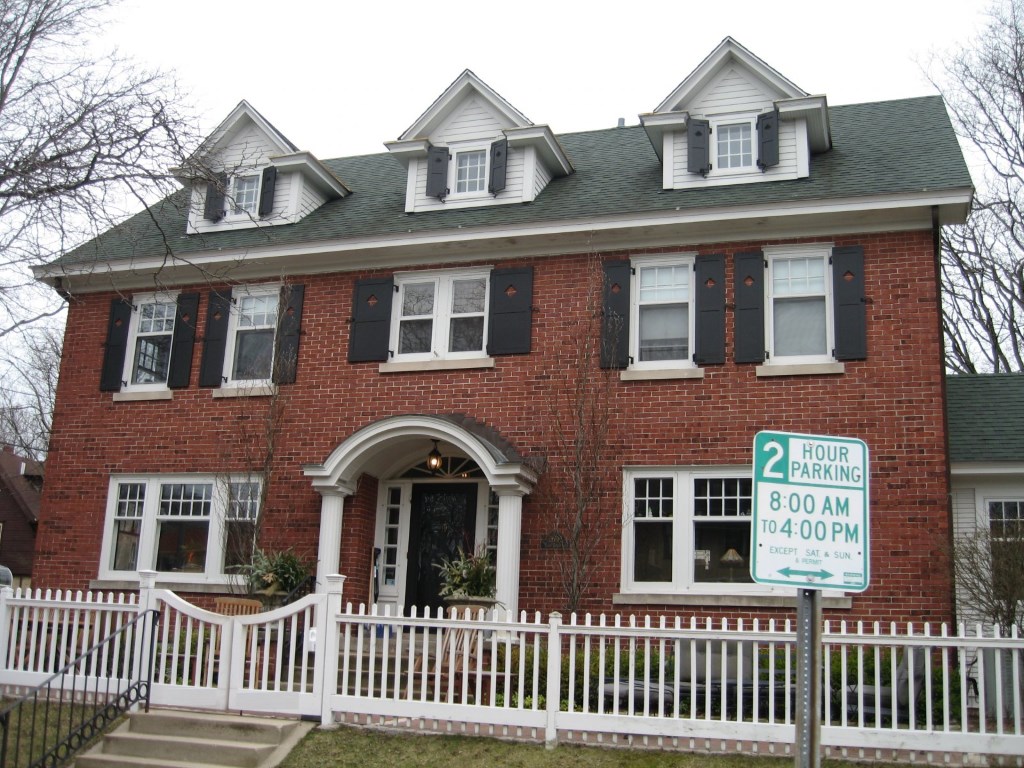 A century ago this month finishing touches were put on this newly-built Georgian Revival Colonial single-family, $7,000 residence on the Upper East Side near Downer Ave.

The home, at what was then 537 Linnwood Ave. (often misspelled “Linwood”), was one of the dozens of speculative residences built by George Schley [1868-1945], and designed by Perce Schley [1891-1980], his son. It must be one of the earlier ones, since the firm was founded in 1914. We have visited other Schley homes in the past, including that of Sheldon Wasserman, M.D., who will be sworn in next week as a County Supervisor. His district includes this property.

The Schleys were good at gauging the market for upper middle class housing in Milwaukee, and crafted well-conceived floor plans and elevations for their homes, with such now-standard features as electric light, central heating and plumbing, and even sometimes garages. Although styles ranged widely, they tended toward the vernacular of the past, with historic references quite literally presented.

Not far away, in the same neighborhood architects like Russell Barr Williamson and Frank Lloyd Wright were composing homes out of an entirely new architectural vocabulary. [See, for example, House Confidential: Pam Frautschi‘s Prairie Style Home.]

Wright would not have approved of this home with its traditional facade. He wrote in 1931, “only a vanishing present looks upon a ‘Georgian’ outside as tolerable, now.”

The homes in this area were largely built for prosperous owners who had grown up in homes with gas lights, wood stoves and outdoor privies in the era before automobiles.

This residence, then a marvel of modernity, despite its traditional facade, was advertised in the May 21st, 1916 Milwaukee Journal:

“Cold type cannot describe the architectural beauty, not the beauty of the interior decoration of this exquisite home … located 5 blocks from Lake Park in a beautiful restricted district only 25 minutes from the heart of the city,

“The ground floor consists of a large living and dining room, a kitchen containing a built-in icebox and a tile floor sun parlor. The second floor has four immense bedrooms, bathroom and shower bath, while the third floor has a billiard, maid’s room and bath.

“The home is decorated with an imported paper of the most delicate tones. Only by personal investigation can the full magnificence of this home be realized.”

Yes. You read that right — a built-in icebox — back when our less fortunate ancestors were still hauling ice up from the river and storing their produce in a pit they dug next to the outhouse.

A Century Later, Much the Same

Today, one hundred years later, not much has changed in the fanciful world of real estate writing. True, the ads are more likely to appear at UrbanMilwaukee.com than in the print edition of the Milwaukee Journal Sentinel, and homes are no longer prized for their built-in iceboxes, attic billiard rooms and maid’s quarters. (Terrible shame about the latter two.) But they are still building plenty of Georgian houses, that’s for sure. [See House Confidential: Coach Wojo’s Mequon Manse.]

But real estate companies like the Mandel Group, whose Chief Operating Officer Bob Monnat resides in the home we are discussing here, can still lay it on pretty thick when promoting their luxury ventures. They just use a newer lingo, and are big on “amenities.”

The North End, a Mandel project:

…offers Milwaukee’s most robust sampling of amenity spaces. There’s something unique and fun in each of the buildings. Regardless of which North End building you call home, as a North End resident you will enjoy the amenities throughout the entire community.

Just like the meticulous design of the apartments themselves, the amenity spaces were designed with you in mind, intended to boost the residents’ living experience…offering various platforms for connectivity.

The “platforms for connectivity” now go beyond chalking up a pool stick with your opponent prior to a round. The billiard table in the game room has been joined by “foosball, ping pong, darts and arcade games.” The “Vignette,” the fifth building of the North End, scheduled to open in 2017, will include an outdoor swimming pool and mini bowling lanes.

What with the swimming pool, those are more platforms for connectivity than you’ll find in the Landmark Lanes.

Among indoor residential amenities these days, wooden-fronted built-in ice boxes are out, replaced by:

Stainless Steel Appliances: Energy Star Appliances throughout, including washer/dryer sets with advanced cold wash cycle, numerous wash actions and moisture settings. …  From the stainless steel appliances to the high end countertops, each interior appointment was made with a high level of detail.

Importantly, we emphasize sustainability — materials that are tough at the start and built to last. After all, longevity is one of the most environmentally responsible goals we can achieve.

“Longevity” certainly fits the bill for this handsome home, which Bob and Barbara Monnat have owned since they paid $247,000 for it in 1998.

Back in 1968, when large houses like this one were a drag on the market, the city assessor noted the building’s “poor interior condition. Needs maintenance and interior adjustments,” such as perhaps including getting rid of the old ice box and doing something about that hideous wallpaper of the most delicate tones.

By that time the maid had long since quit, her work now done by electric refrigerators, self-stoking coal furnaces and automatic washer/dryer combos. Her vacant quarters in the attic was now considered a “value room,” perhaps something to rent out to a spinster or a college student.

In 1978, the owner, Timothy R. Schoewe, the Grants Coordinator and Analyst for the Fire and Police Commission of the City of Milwaukee, decided he would like to add a garage to the northwest corner of his 7,200 square foot lot and attempted to take out a permit to do so.

This was denied, since the city required a side setback of 12 feet, and the proposed setback was a mere foot. However, Schoewe prevailed on appeal, and the one-story garage was built in 1979.

Over the years the home was not disfigured although it could have used a more regular schedule of paint and other maintenance. The operable shutters remained, while they might have been discarded as fusty and old, or simply have fallen apart. It appears that Schley, like Mandel used “materials that are tough at the start and built to last.”

In 1991 the home had refinished hardwood floors and new carpet, while the fine wallpaper of the most delicate tones had been painted over or somehow removed. The residence was listed at $189,000.

The next year the kitchen got new owners and new cabinets. Did the icebox survive?

In 1998, with Monnat now the owner, the home’s exterior got a most interesting alteration with the installation of a 3-1/2 foot high picket fence running for darn near 200 feet around the property. It remains, and helps to define the home which is set slightly above the street on a somewhat raised foundation. The fence provides a nice break between the sidewalk and the home, but must be an absolute pain to mow around. Not to worry, Monnat has two healthy sons who can do that work. Or, maybe the man’s hired an outdoor maid by now. He can certainly afford it.

Landscaping here is observed mostly in the breach, with grass being the plant of choice. This is not unusual for authentic Georgian and Colonial-era homes, none of which, of course, were ever originally constructed in Milwaukee. For the occupants, this lack of shrubbery must come as a convenience, since there are no branches to obscure your view of the bus stop outside, in case you’re waiting for the #21 or #22 to roll around. From the outside, you get a nice view of a Bucky Badger in the window in the inside, waving at you. On, Wisconsin!

Besides the white picket fence, the biggest change this property has seen over the past century is certainly the garage. Otherwise, the home looks much like it did in the architect’s rendering of 1916, with its handsome brick, crisply detailed soffit and well-proportioned fenestration.

However, the garage of today is not the one built in 1979. Today’s garage, built in 2010 at a cost of $35,000, is a two-story affair, with a double door facing the street. It includes a magical little space above that looks like a great and comfy getaway for the owner on those cloudy days when the cavernous empty billiard room in the attic becomes overwhelmingly gloomy and oppressive, or to simply escape all the racket the maid makes when she vacuums the tile-floor sun parlor  and all the other rooms in the 3,089-square-foot home. 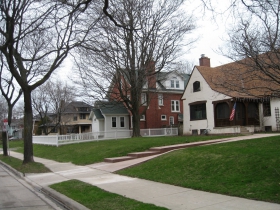 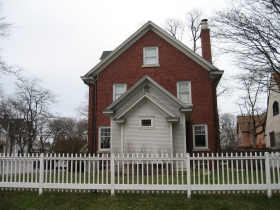 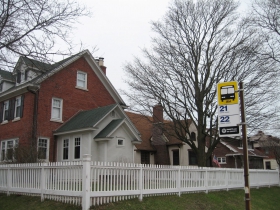 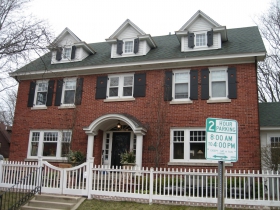 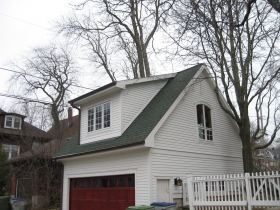 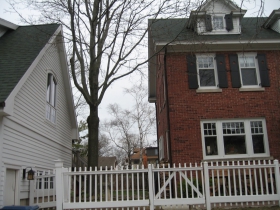 How Milwaukee Is It? The residence is about 3 miles from City Hall.

2 thoughts on “House Confidential: The Full Magnificence of a 1916 Home”