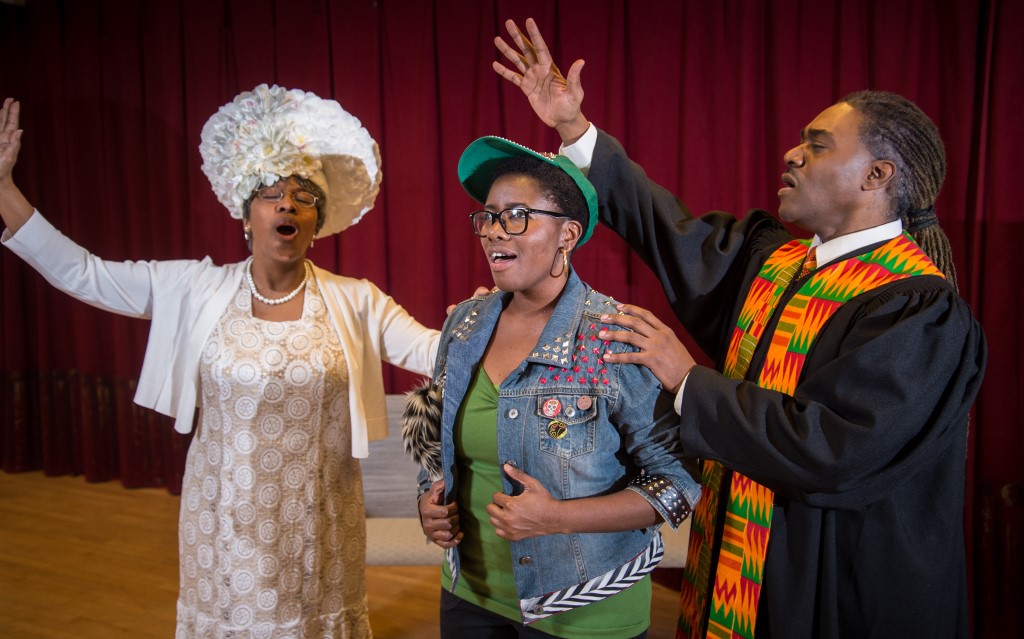 There are reputedly several origins of that phrase, but no matter. It’s exactly what this story is all about. Crowns is a story of six African-American women who find a way to represent themselves through the hats they wear to church, funerals and weddings. These are the stories about the women under the hats.

Crowns runs March 4 through March 26 in the Cabot Theatre at the Broadway Theatre Center, and its director, Sheri Williams Pannell, says she couldn’t be more excited.

“I’ve wanted to direct for a long time,” she says. “At one point I wanted to perform but I had a desire to be a storyteller as a director and I relish this opportunity.”

In 1998, North Carolina photographer Michael Cunningham began taking pictures of women in their hats. He was intrigued that women placed so much importance on this. Cunningham must have known it was something beyond fashion. His friend, journalist Craig Marberry, thought they should put together a book of the photos and the stories behind them. Marberry was curious about the ritual as well. Why do so many African-American women wear flamboyant hats to church?

That book and that question led to the creation of this show, written by Regina Taylor, and based on the book, which also incorporates various songs not original to the show.

“I think the hats are important because they’re rooted in the African tradition,” says Williams Pannell. “It shows how you present yourself before God. That you should present excellence before the almighty.”

So, what is a crown?

“The crowns are the most fabulous and flamboyant pieces of headwear you could imagine,” Williams Pannell says. “It’s all about presenting yourself in your Sunday best.”

The hats are a reflection of a woman’s spirituality and much more.

“You have to save your pennies as they’re not inexpensive. Each is unique, designed especially for you and they often trigger a memory,” the director says. Some of the hats incorporate butterflies and other items that mean something to the wearer, she notes.

“The tradition of headwear comes from Cameroon in Nigeria, Williams Pannell says. “Our wonderful costume designer Barry Link made all these beautiful hats for our cast members. He’s done a lot of research and the script indicates how each hat should look for each character. Some have rhinestones, others incorporate more color.”

We follow the journey of self-discovery through Yolanda’s eyes. She’s a 16 year old from Brooklyn sent to live in South Carolina after the death of her brother.

It’s a culture shock for Yolanda. There’s an internal struggle she undergoes. Yolanda doesn’t now if she has what it takes to be one of them.

“She begins to take part of cultures being passed down,” Williams Pannell says. “I want the audience to get a taste of this rich gumbo of a community. The play is entrenched in current day, but there are also memories from the 1950s and 60s.”

Her own hat has personal importance for Yolanda. In the beginning, she wears a baseball cap that belonged to her brother Teddy, who was killed by a gunshot.

Williams Pannell says the story is about following your calling. “Whether it’s at church, cooking, taking care of children. It’s all about living in the moment.”

The show’s director says the women in the story have what she calls “hattitude.” And what exactly is that?

“It’s the attitude with which you wear your crown. When you look at these crowns you’ll be amazed. Some are a foot and a half wide, and some can be as high as twelve inches in height.”

“The hats alone are worth the price of admission.”

Audience members are encouraged to wear their favorite ‘crowns’ to the show, but must take it off for the performance.

Williams Pannell is lucky enough to know a local woman she calls a Red Hat Diva. “A woman must own at least a hundred hats to qualify for the designation,” she explains. “Jenelle Elder Green lives in Milwaukee. She has more than 200 hats.”

In the story, Yolanda is forced to go inward and learn about herself. It’s pretty much a year of boot camp. She’s now living in a rural area, not Brooklyn. She doesn’t have cable or internet. Then she has to be ready in the morning when the sun comes up, do her chores, go to bible school. All things she’s not used to. There’s a prayer service and bible study on Wednesday. Then church on Sunday. There’s nothing to distract her from experiencing the moment.

Yolanda learns about American history. Her culture. And herself.

The production is clearly very important to Williams Pannell. You can hear that in the tone of her voice.

“I always try to live with an awareness of my ethnic and cultural heritage. Honoring that. But I’m open to understanding the roots of spirituality didn’t begin on these shores of the United States (but goes) all the way back to east and west Africa. Ethiopia.”

Crowns, March 4-26, Cabot Theatre in Broadway Theatre Center, 158 N. Broadway Tickets may be purchased online at skylightmusictheatre.org or by calling (414) 291-7800. 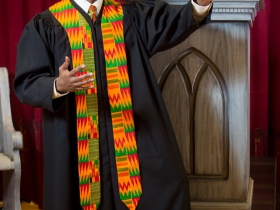 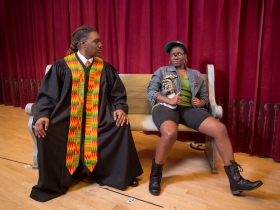 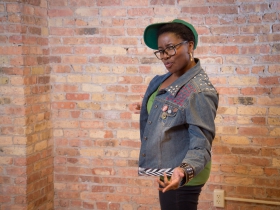 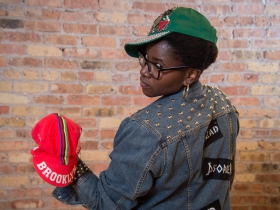 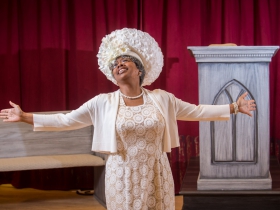 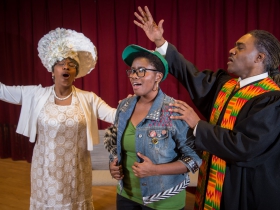