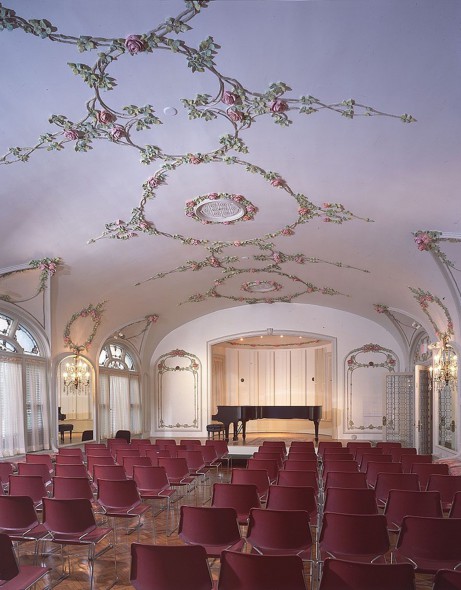 In a now annual tradition, Present Music offers a more intimate experience with its winter concert. The “In the Chamber” concert features a selection of works for small ensemble heard in smaller settings. To accommodate a growing audience, the concert will be repeated four times on Thursday, Friday and Saturday in different venues. The audience can be closer to the players and listen in acoustically-friendly environments. Dining options (most reservations closed at this reading) are also a part of the mix.

Contemporary composers often articulate objectives for their compositions. They explore ideas that challenge players and the imagination of the listener. Do we hear what they envision when they write?

A long friend of Present Music, Michael Torke has been recorded by Present Music. His Yellow Pages (1985) contains an energetic repeating, but evolving pattern , as though, Torke argues, “paging through the categories of telephone (listings) inside, one notices that alphabetically, the entries change slowly.” Torke also sees the work, composed in the predominant G major key, as having a “dark, burnt yellow”feeling, as distinct from other compositions, White Pages and Blue Pages, commissioned by Present Music in 1995 to complete the phone book. The colorful ensemble work engages violin, cello, flute, clarinet and piano.

Kamran Ince also enjoys a long relationship with Present Music. Ince observes that his work Curve (1996) “starts and ends with sections that are airy, ethereal, longing, spiritual and with a certain sense of peace.” The central “arc” of the piece, Ince adds, is a raw Balkan “rock-and-roll” that suggests a physical form to him — “architectural shapes associated with spiritual structures.” The work is scored for four string players and a clarinetist.

Pierre Jalbert‘s Trio for Clarinet, Violin and Piano (2011) engages violin, clarinet and piano in an energetic work that is in turns “sustained, hushed, and eerie” through a “propulsive finale” featuring “scurrying, meter-fracturing runs,” as he describes it.

Christopher Cerrone offered a new work that was premiered at Present Music’s Thanksgiving concert. This concert will feature another of his works, Sonata for Violin and Piano (2015), played by violinist Segnitz and pianist Smythe Cerrone. The work explores “every possible technique for violin,” Cerrone says, adding that he had once sworn he would “never write a piece for violin and piano.” Having overcome that resistance, he was apparently determined to create a work different from all others for this familiar combination.

Caroline Mallonee‘s Unless Acted Upon (2011) begins with Newton’s Cradle, recalling that executive’s desk-top toy with suspended metal spheres that transfer energy from one to another. “When one ball is pulled backward and released, the ball on the opposite side moves upon impact,” she explains. “This piece explores several ways in which forces can affect a body in motion.” Violin and cello, flute, clarinet and piano perform this creative science lesson. 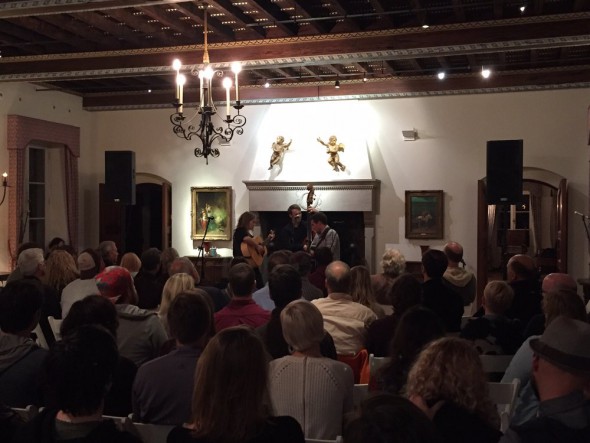 The Great Hall at Villa Terrace

Helmers on bass clarinet joins a string quartet in a contemplative selection from Ken Thomson‘s Perpetual (2011) subtitled “Don Pullen Says It’s OK.” Helmers is particularly taken by the demand on bass clarinet. Thomson writes “in excruciatingly high registers – off the charts,” Helmers says. “This produces a very interesting timbre with a lot of overtones (with) a thick wooly kind of texture.”

Some of theses works challenge the usual perception of an intimate chamber concert as the composers push the limits of instruments, with percussive piano, high energy strings and fortissimo winds. These works could easily be staged in a large auditorium as well.

Some works do thrive in the quiet environs of a small venue. And these more intimate settings encourage us to listen more carefully to all of them. Can we hear the color, the architecture, the physics and the transformed character that creative composing brings to the ensemble?

All provide the listener with the opportunity to appreciate the extraordinary virtuoso skills of Present Music Ensemble players. That experience is rarely available with the high, deep stage of Turner Hall. I like the ambiance of Turner Hall. But I look forward to the presence of the music and the artists we’ll get in the Wisconsin Conservatory hall, where both sound and sight lines should be excellent for this ambitious winter program.

Before Thursday evening’s concert, some patrons will dine at the Sala Italian Restaurant (reservations closed). At 7:30 p.m. February 25, the performance will be staged on the stage at the Zelazo Center – 2419 E. Kenwood Boulevard on the UW-Milwaukee campus. (That is, performers and audience will share the platform.)

Friday morning, February 26 at 11:00 a.m., the ensemble will perform in the great hall of Villa Terrace – 2220 N. Terrace Avenue. Acoustics are excellent, but sight lines are not. Patrons may stay for a brunch offered after the concert. There are no reservations required for brunch, but there is a suggested $15 donation (proceeds to benefit PM education programs). 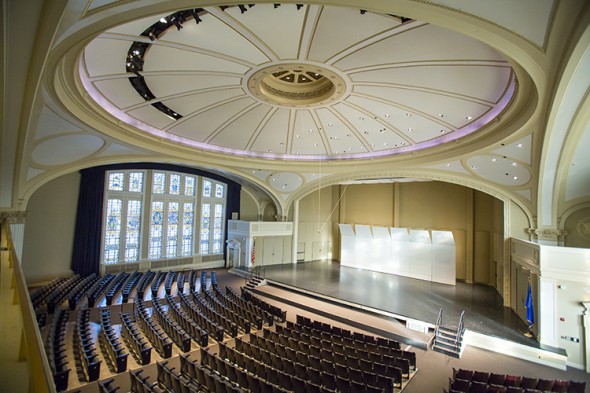 The set concludes at a private home on Saturday evening February 27 with dining, mingling and in-house performance as a (sold out) package.

Concert tickets are offered at three price levels – $15, $25 and $35 — basically reflecting whether you choose to reach and and touch the players or sit further back and catch the blended sound. (Students can attend for 50 percent less.) More information and tickets can be found online.

Coming Next:
The next Present Music concert will extend a new tradition – a celebration of spring – with program titled Equinox: Light and Dark on Sunday evening March 20 at Turner Hall. Advanced reservations are required for a “sensory adventure” before the concert: a multi-course blindfolded dinner-in-the-dark also at Turner Hall. Reserve your place at dinner by March 11.