Do We Dare Play Charles Ives?

Prometheus Trio avoided the composer for years, then finally braved it. How did it go?

In his charming remarks on Monday night prior to playing the Trio by Charles Ives, cellist Scott Tisdel explained how the work had been a target in the repertoire sights of the Prometheus Trio since its inception 16 years ago. The way Tisdel described it, performing the Ives always fell on a narrow continuum somewhere between a firm NO and a preference for a Novocain-free root canal. He went so far as to admit the ensemble, in its prior incarnations, had been “scared” of the work.

“Terrified,” corrected pianist Stefanie Jacob, putting not too fine a point on it. 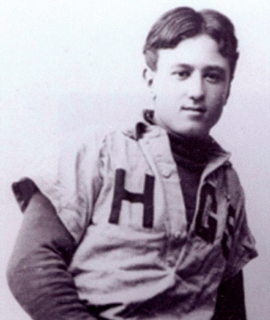 Yet, as the group took a few moments to demonstrate fragments of music in the Ives that one should keep ears alert for—fraternity drinking songs, Americana folk music à la Stephen Foster, hymns and spirituals, a sea shanty, and a bit of Ta-ra-ra-boom-de-ay—it began to seem that trepidation might be replaced by enthusiastic anticipation. Sure enough, once the Prometheans launched into the work, in their latest concert at the Wisconsin Conservatory of Music, the Ives was as delightful for the audience to hear as it seemed enjoyable for the musicians to perform.

The opening, a somber duet for the piano and cello, suggested a hymn. Tisdel’s warm sotto voce with Jacob’s tender support blossomed into a phrase of lyric beauty. Violinist Margot Schwartz played in a similar vein, and the unusual nature of Ives’s melodies captivated listeners prepared for something much pricklier. The way Ives turns a folk melody on its head is nothing short of miraculous. One minute, we sifted through dissonance in search of the familiar; the next, we were surprised as the movement ends with a lushly voiced C major chord.

The second movement is a cacophonous mash-up of recognizable fragments, obscured by bombastic insistence from the piano and vague tonality for the trio. Ives intentionally drops our ears into a cavalcade of sounds akin to hearing all the bands in a parade simultaneously with a church choir and blotto collegians chiming in for good measure. He is joking with us, and it’s fun. Coming out on the other side of the chaos, the movement ends on a simply plucked two-note ending that, after all the complexity, sounds slightly comical.

The third movement begins with a fanfare followed by a sweet amen, and melody wanders in and out of the frame like musical cubism. Shards of tunes playfully scattered with sly pandemonium make listening to this piece a lunatic’s game of hide and seek. Combing the snarls out of Ives’s innovative music would be a disservice to his genius. He turns melody and harmony on their heads and spins them around a few times for good measure. As a delicate “Rock of Ages” filtered out of the noise, the hard work that the Prometheus trio put into their performance created a musical experience that made Ives sound accessible and oddly logical.

The program opened with the Trio in D Major, Hob. XV: 24 by Franz Joseph Haydn. Here Jacobs lit up the keyboard with what sounded suspiciously like extra fingers. Clean, fast licks frolicked out from the piano, and Tisdel and Schwartz moved phrases across the bar lines with a classical stylishness that emphasized Haydn’s magic. Instead of filling every bar and beat with music, Haydn made his music effective with empty space, which made the harmonic surprises sound fresh and clever. Indeed, the musicians navigated with ease the subtle dynamics, amiable phrases, and reposeful space.

The program closed with Robert Schumann’s Trio in G Minor, Op. 110. The scampering theme of the first movement was passed around the trio with even virtuosity. Romantic music is meat and potatoes for Schwartz, Tisdel, and Jacob. The three played the Schumann with such good energy that it had the desired quality of sounding as though they had welcomed friends into their living room for fun, not because they had a paying audience. Chamber music, especially, needs that spontaneous vivacity that gives the audience a peek into the joy that artists feel when they are making mutual musical decisions and feeding off each other’s enthusiasm. That happened a lot in this performance. Even the few moments that weren’t completely buttoned down had an edge-of-the-seat quality that was infectiously fun.

As an encore, the trio gave a Valentine nod with an arrangement of Edward Elgar’s Salut d’Amour. Schwartz, in particular, perhaps still fired up from the Schumann, wore her heart on her sleeve in this sentimental close to a lovely evening.