By Tamarine Cornelius, Wisconsin Budget Project - Feb 8th, 2016 10:11 am
Get a daily rundown of the top stories on Urban Milwaukee

Cutting taxes and luring companies from other states won’t do much to boost job creation in Wisconsin, according to the findings of a new research report released this week that examines which businesses create jobs and where they create them. 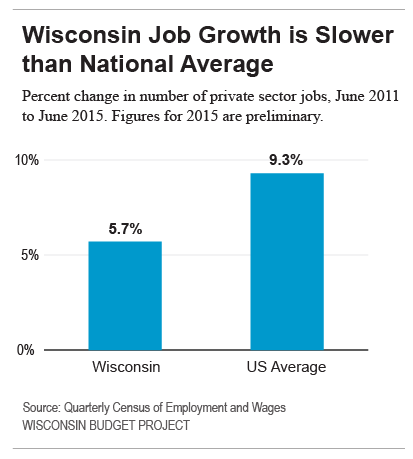 Wisconsin state lawmakers, including Governor Walker, have emphasized the importance of creating new jobs in Wisconsin, and have argued that tax cuts are the path to achieving that goal. With that in mind, they have enacted nearly $5 billion in tax cuts over six years, including a tax cut that nearly wipes out any income tax liability for manufacturers, and a tax cut for multi-state corporations that makes it easier for them to shift income from one state to another.

According to the theory, lower taxes will spur business to create more jobs. But despite deep tax cuts in Wisconsin, the pace of job growth in the state continues to lag the national average. Between June 2011 and June 2015, the number of private sector jobs in Wisconsin grew by 5.7%, far below the U.S. average growth of 9.3%.

One reason the tax cuts haven’t done much to increase the pace of job creation is that many businesses responsible for creating the most job growth in Wisconsin don’t get any benefit from the tax cuts. That’s because most jobs – 70% – are created by young, fast-growing companies that usually do not have much taxable income. According to the report:

“[One] reason state personal income tax cuts are unlikely to help many of the rapidly growing start-up firms most likely to create a large number of jobs is that many of these firms spend so heavily on new equipment, product development, and marketing that they have relatively little taxable profit in their early years.”

In fact, cutting taxes can actually slow the pace of job creation. That’s because cutting taxes reduces resources available to invest in the state’s university system, public schools, and transportation network – all of which are necessary for entrepreneurs to build businesses.

Attempting to lure business from other states is also likely to be an ineffective method of creating a significant number of jobs in a state, according to the report. Governor Walker has made an effort to convince Illinois and Minnesota businesses to move across the border and bring their jobs with them, but the new analysis found that the vast majority of jobs are created by businesses that start up or are already in a state and very few jobs are created when businesses move across state lines. Nearly 9 out of new 10 jobs in a typical state were “home grown,” according to the report, in that they were based in startups, the expansion of employment at existing establishments, and the creation of new in-state locations by businesses already headquartered in the state. In a typical state, only 11% of the new jobs created were the result of the creation of new in-state business establishments by companies headquartered out of state, and an even smaller 3% were created when businesses moved already-existing jobs from one state to another.

If cutting taxes and poaching jobs from other states doesn’t work, what are effective strategies Wisconsin and other states can pursue to promote job creation? State and local governments should focus on promoting entrepreneurship, thereby encouraging new businesses to grow quickly and add new jobs. According to the report:

“There is a growing consensus among the economists who have studied the new data on the dynamics of job creation about its implications for public policy: policy needs to focus on encouraging entrepreneurship generally, helping new businesses to survive, and enabling businesses with the potential to become high-growth firms to fulfill that potential.”

Finding out the most effective way to encourage entrepreneurship is an ongoing process, with Wisconsin and other states still experimenting to find workable, efficient ways of supporting new businesses. Wisconsin should continue to search for new, productive ways of helping businesses create jobs, and abandon methods proven to be ineffective.

Read the full report by the Center on Budget and Policy Priorities: “State Job Creation Strategies Often Off Base.”