The quest for community of Walnut Way co-founders Sharon and Larry Adams.

By Jabril Faraj, Milwaukee Neighborhood News Service - Feb 3rd, 2016 10:49 am
Get a daily rundown of the top stories on Urban Milwaukee 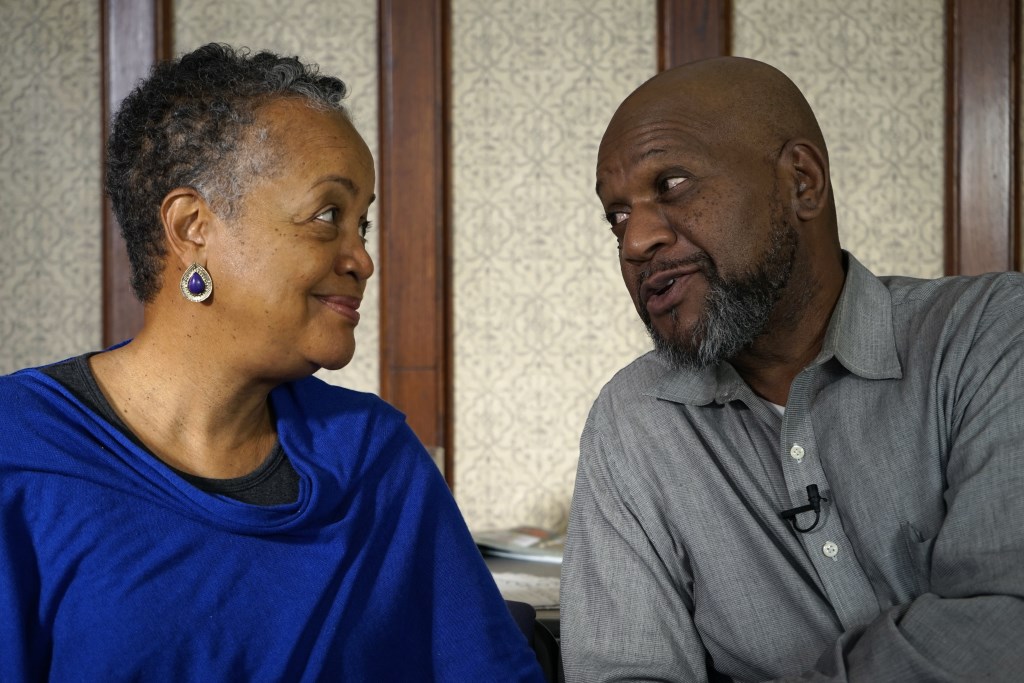 In 1997, Sharon Adams moved back into her family home in Lindsay Heights after being away for almost 30 years. She was dismayed by what she saw.

“I couldn’t get this voice out of my head, that home wasn’t the place that I left,” she said. She said “the trees were gone” and police sirens were a familiar sound at night.

Adams, who describes the call to come back as spiritual, began to walk the street, meet neighbors and listen to them. In 2000, shortly after she met and married Larry Adams, they founded Walnut Way Conservation Corp. Since then, the couple has worked with neighborhood residents to help create a culture of community-led neighborhood development and address issues including housing and healthy food.

Larry had been working in the neighborhood since the late 1980s as an electrician and contractor for the YMCA. He met Sharon when she was looking for a quote for electrical work.

Back then, Larry said, contractors would never come to the neighborhood to make assessments. “The truth of the matter is, this neighborhood didn’t really matter,” he said, adding, “[Sharon] was very persistent.”

Larry replaced a bad electrical switch free of charge and said he would return with a written estimate but, before he could leave, Sharon asked if he wanted a cup of tea. Though Larry recalls he was quite busy that day, he said yes.

“I sat down with her, and I drank the tea and listened to those things that she wanted to do around the house, as far as renovating her home,” he said. 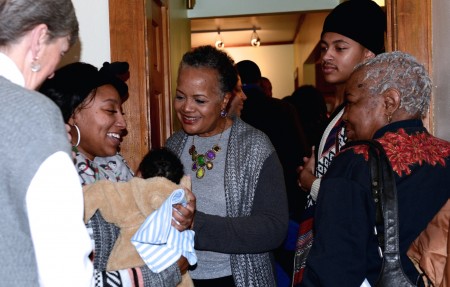 Sharon Adams mingles with community members during a recent event held to pay tribute to her and her work at Walnut Way. Photo by Sue Vliet.

So, that was the beginning,” Larry said. “A year later, we were married.”

In 1998, the two worked together to create a tulip garden in the neighborhood. Larry said the garden was about showing the ability for change. “If you’re able to show people … you’ll be much more effective. So, we were able to demonstrate by putting 2,000 tulip bulbs in the ground that this could be a place … that matters.”

In 2000, Walnut Way began working in an 11-block area where more than 100 homes had been demolished to clear a path for the Park East Freeway, which never materialized. In 2008, the organization expanded its work to encompass the entire Lindsay Heights neighborhood.

Under the guidance of Walnut Way, more than 100 homes in Lindsay Heights have been restored or rebuilt and more than 20 vacant lots have been transformed into gardens and green spaces.

“Everyone loves beauty,” Sharon said. “And, if you stop and you talk to people long enough everyone has a hope — they want their children to succeed, they want to work, they’re tired of their homes being demolished.”

Sharon and Larry are quick to deflect praise; they’re “uneasy” with the focus on the two of them, she said. Sharon attributes the growth of Walnut Way to “neighbors walking and believing and building homes here.”

When the couple started looking into other places that had made considerable gains after long periods of disinvestment, whether it was in Boston, Detroit or Oakland, “the ideas and the hopes and the call for action came from the people who lived there.” Sharon said it’s important for people to have a voice and the ability to effect change.

“They’ve been a vessel,” Williams said, referring to Larry and Sharon. “A vessel where you can come and, whether you have a little bit to contribute or whether you have a whole lot, the call was to come and to bring … your dreams and your vision.”

Mary Ann Dawson has been a resident of Lindsay Heights since the late ’90s. Dawson volunteered along with her neighbor and friend Louise Wilhite to help restore the house at 2240 N. 17th St., which would eventually become the Walnut Way offices and now serves as a meeting place. She said the two leaders have set an example for others.

“Sharon had a way of engaging people with resources and making them better than they knew that they were,” Larry said, adding that this is not only true professionally but personally, as well.

Sharon said, however, that her work would not have made a difference without Larry’s determination to get things done. “This area was so blighted and so disinvested in, and so disconnected, that to invite someone to be a collaborator, a partner … seemed like I was presenting a pipe dream. And, what Larry, [as an] implementer, has done consistently is to make it work.”

Maanaan Sabir, who is a co-owner of The Juice Kitchen, part of the new Innovations and Wellness Commons at 1617 W. North Ave., lives and works in Lindsay Heights. “I’m a lover of landmarks,” he said. “In my life, there have been so many landmarks that have directed me and guided me to the right path. And, this area … has been the right path for me.”

Jeremy Davis, an environmental specialist with Walnut Way, came to Milwaukee in 2010 with a return ticket to Johannesburg, South Africa, and a job waiting for him there. But he never went back. “The community that I came to, it’s a place of destination,” he said. “There’s a lot of places that I’ve been, a lot of places that I’ve seen, but what I encountered here … was powerful enough to keep me.”

Sharon announced late last year that she would be stepping away from full-time work with Walnut Way. Larry has had recent medical problems he’s had to recover from. But both are grateful for the people they have met and are excited for what the future holds.

“We always talk about doing, being of service,” said Sharon. “So, I think that life will still be full of service and that service will include Walnut Way.”

Larry added, “This is our home; this is our neighborhood. We started not because there was a petition or a sign or any type of application … we started because we live here. We’re going to be involved — we’re not running, we’re not going. This is home.”

One thought on “How Walnut Way Changed the Inner City”