By Edgar Mendez, Milwaukee Neighborhood News Service - Jan 14th, 2016 10:55 am
Get a daily rundown of the top stories on Urban Milwaukee 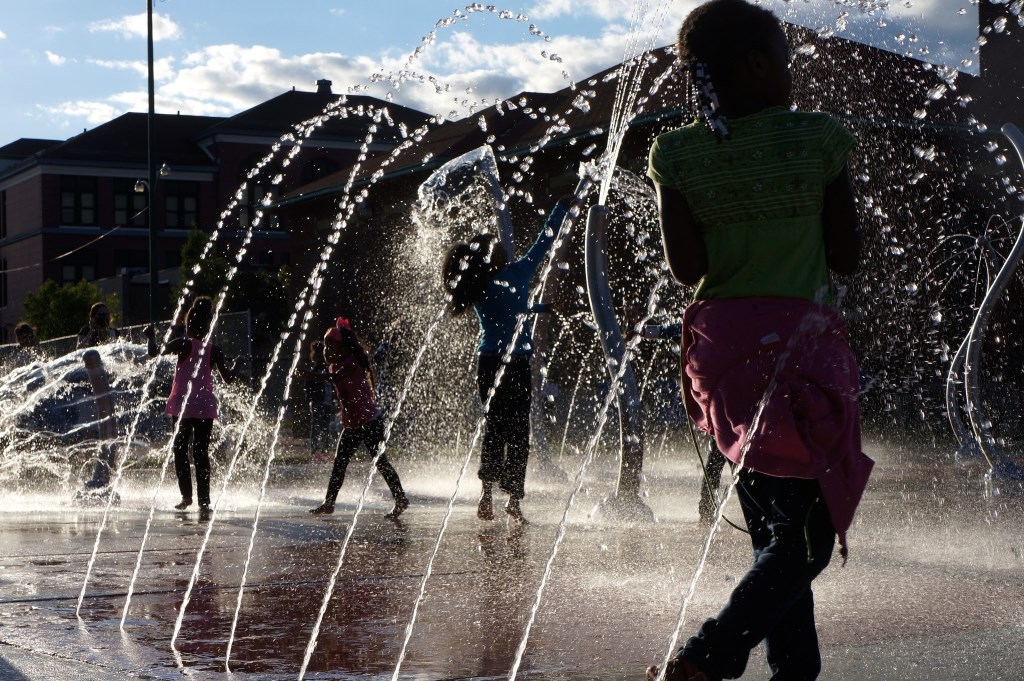 Neighborhood youth play in the splash pad after opening ceremonies for the renovated Moody Park. Photo by Adam Carr.

According to Arlene Patterson, chair of resident-led Amani United, once the group began putting Moody Park on the agenda for its monthly meetings in 2014, attendance shot up.

“Everybody wants to have a say in what the future of Moody Park will be,” Patterson said.

That was the idea three years ago when stakeholders from the neighboring COA Goldin Center and Auer Avenue School, the Dominican Center for Women, Milwaukee County Parks officials and others began meeting to discuss the future of the park. At the time it was a sore spot in the Amani neighborhood. The park featured little in terms of usable playground equipment or other amenities and the long-shuttered building housing Moody Pool had become a haven for drugs and crime. The stakeholders understood that even a shiny new park would meet the same fate unless Amani residents took ownership.

“In a lot of communities the residents would’ve shrugged their shoulders and given up,” said Tom Schneider, executive director of COA.

But the residents of Amani didn’t give up. 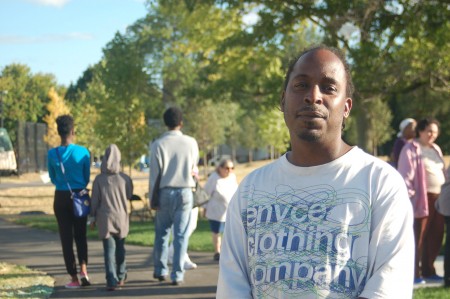 Tiarence Morgan, 38, said the revamped Moody Park is a point of pride for neighborhood residents. Photo by Edgar Mendez.

“There’s a real sense of accomplishment among them (residents) that they had a chance to step forward as a community and make this park happen,” Schneider said.

More than 500 residents showed up for a grand opening ceremony for the park in August. Residents were wowed by the improvements, which included a 3,000-square-foot community center, lit basketball courts, a picnic pavilion and splash pad. Cameras and lighting have since been placed strategically around the park to promote safety, said Patterson. A resident group, Friends of Moody Park, was also created to serve as extra sets of eyes and ears for the park.

Ongoing renovations will eventually cost $2 million, with funding coming from $5 million in bonds originally allocated by the Milwaukee County Board to rebuild Moody Pool in 2010. The pool has since been demolished.

During a Moody Park planning meeting in June 2015, Schneider said the key to the park’s future was to feature programming right from the start so that it doesn’t become a hangout for the wrong type of crowd.

That’s what residents said occurred after Moody Pool was shuttered in 2002. To avoid a repeat, Amani organizers and other community leaders are working to plan year-round programming at the park. Already on the agenda for 2016 are plans to host a rugby team, dance and cooking classes, and a day camp for children and teens. The programming will cater to people of all ages, Schneider said.

Though official programming has not yet begun at the park, the pavilion was opened in October for use by residents and the COA Goldin Center. In addition, seniors regularly meet to walk the park’s trails and the basketball courts were busy when the weather was better, said Pepper Ray, Building Neighborhood Capacity Program (BNCP) site coordinator for Amani.

BNCP works to help build the infrastructure and resources needed to strengthen low-income communities and has played a big role in the planning for Moody Park. Though there isn’t data available yet to corroborate it, Ray said that crime seems to have gone down in the area since the park opened.

Patterson said the added security measures and steady use of the park should maintain it as a safe place to visit.

“It will remain that way because people know it will be full of children and families,” Patterson said.

The park is one of many developments in the Amani neighborhood aimed at improving the quality of life for residents there. Increased engagement by resident associations, nonprofits such as the Dominican Center for Women and private sector organizations such as Children’s Hospital of Wisconsin, along with an influx of city and federal funding, have resulted in a brighter outlook for Amani in recent years. Another recent development was the opening of the Burke Early Education Center (EEC), which is located in the COA Goldin Center.

At the park with his family on opening day in August, Tiarence Morgan, 38, described the new Moody as not just an improvement over the old park, but something more important.

“This park gives the community something to be real proud of,” said Morgan, “so we’ve got to keep it nice to show people what it means to our community.”