Inside the Grain Exchange, 1880

The trading room was one of the "most lavishly decorated" public spaces in the region. 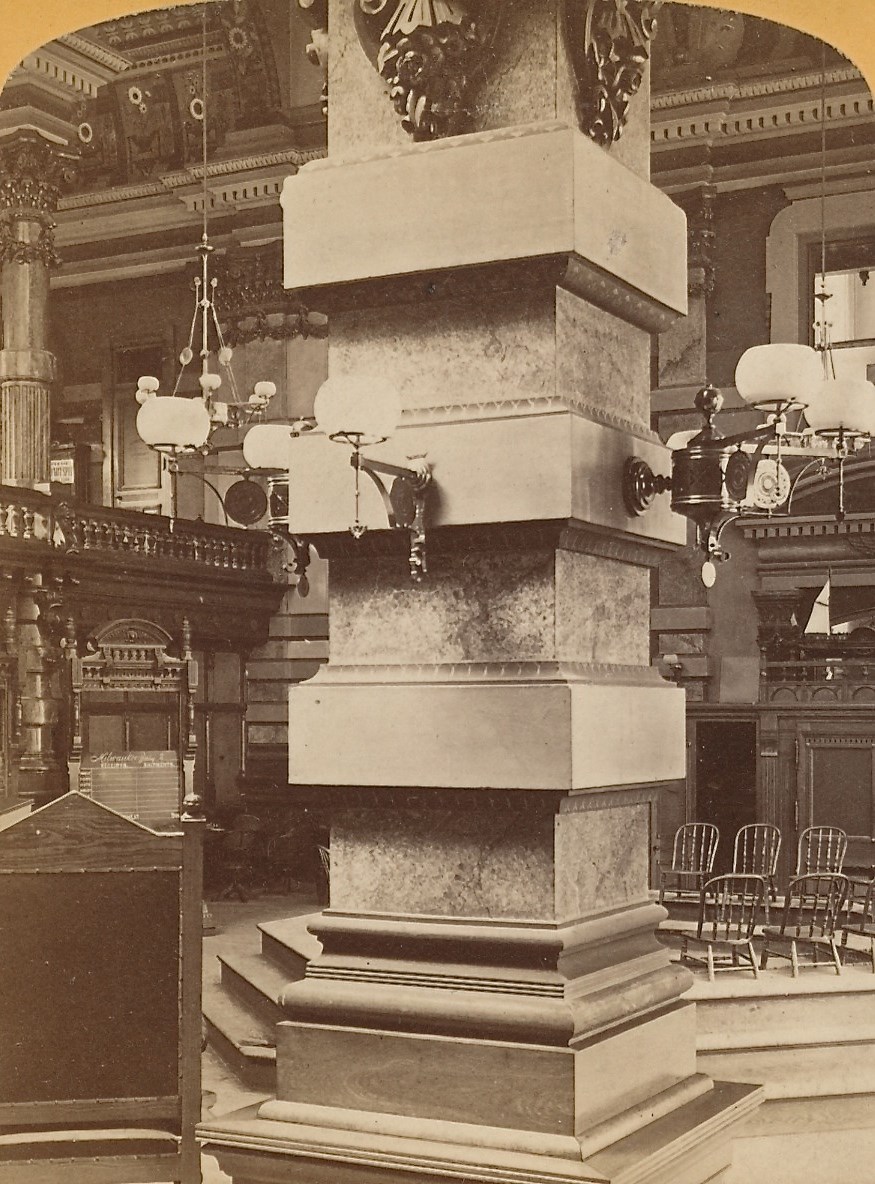 Inside the Grain Exchange, 1880. Image courtesy of Jeff Beutner.

In 1879-80 a new Chamber of Commerce building was constructed at the southwest corner of Broadway and Michigan. Eventually known as the Mackie Building, it was the “baby” of Alexander Mitchell, one of the city’s leading business men, whose bank, the Mitchell Building, just happened to be next door.

The design by Edward Townsend Mix, a noted American architect of the Gilded Age, who began his career in Chicago and then moved to Milwaukee in 1856 to start an independent practice. He was architect of the National Soldiers Home, finished in 1869, designed in a Gothic Revival style. Mix also designed the Gothic Revival Cathedral Church of All Saints and the Monroe Methodist Church at about this time. During the early 1870s, Mix designed a number of Italianate homes for prominent Midwestern families, including Villa Louis in Prairie du Chien for H. Louis Dousman in 1870, and the Robert Patrick Fitzgerald House in Milwaukee in 1874.

Mix then shifted his focus to the Second Empire style. In 1873 he remodeled Mitchell’s home in this style, giving it a four-story tower and mansard roofs. Later Mitchell would hire Mix to use the same style in designing the Mitchell Building in 1876 and the Mackie Building in 1879.

Both buildings survive today and the Mackie Building also goes by the nickname, the “Grain Exchange.” Back when it was built, enormous amounts of wheat passed through the port of Milwaukee and the Mackie Building boasted a three-story commodity trading room called the Grain Exchange, with a sunken, tiered trading pit where the price of wheat was set.

The room was among “the most lavishly decorated public spaces in the region,” according to Milwaukee historian John Gurda. “Commissioned by local artists, the ceiling and walls were adorned with frescoes, murals and wall paintings that shared the theme of industry, transportation, agriculture, trade and commerce,” as Sarah Biondich wrote in the Shepherd Express. “Colossal faux-marble pillars boasted gilded capitals with carved depictions of locomotives and steamships. At the center of the ceiling was a skylight surrounded by frescoes of wheat sheaf medallions and Wisconsin wild flowers.”

The building naturally attracted the intention of famed photographer H.H. Bennett, who would produce 300 or so stereoviews of Milwaukee in the late 1870s through the 1880s. This view of the trading room, taken in 1880, not long after the building was completed, is one of his rare interior views. It offers an intimate glimpse of the ornate ornamentation contrasted by some utilitarian chairs. The trading room remains one of the city’s finest interior spaces today, but much of the decoration is reconstructed. This is how the room originally looked.

The decline of Milwaukee’s grain exchange came as Chicago grew to become the dominant player, as railroads replaced ships as the chief means of transit. As for Mix, he would relocate his practice to Minneapolis in 1888.

Inside the Grain Exchange, 2014 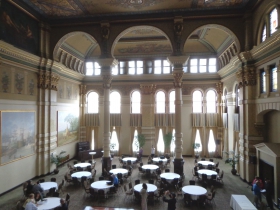 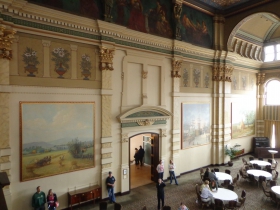 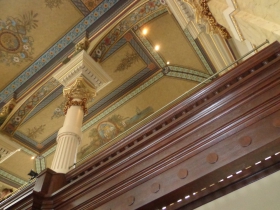 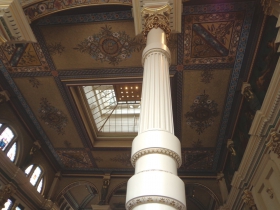 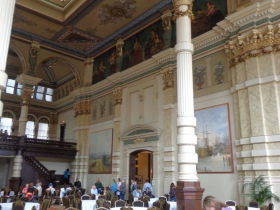 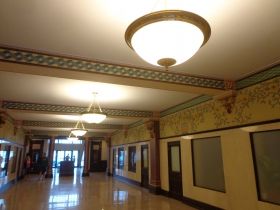 One thought on “Yesterday’s Milwaukee: Inside the Grain Exchange, 1880”