It had many businesses and is now where the high-rise First Financial Centre is located. 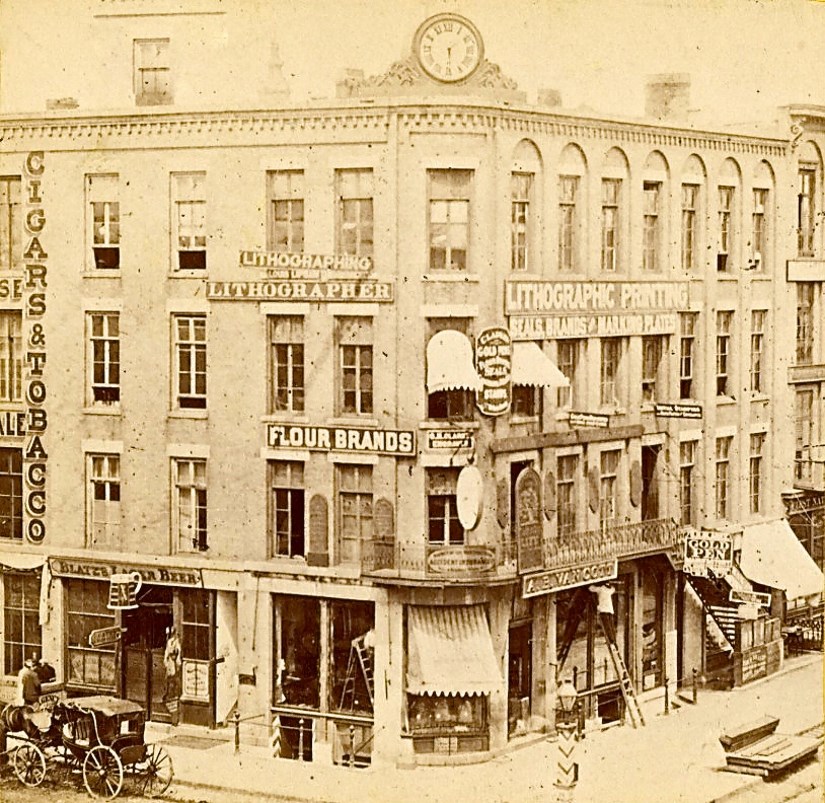 In the late 1860s the corner of Water and Wisconsin was a very busy place. This photograph from that period offers a close-up of the building that occupied the northeast corner of that intersection. It was taken by Edwin Bangs, who did many photos of early Milwaukee.

This substantial four-story structure of Cream City brick attracted the attention of many photographers because of its fine ornamental iron facade. Plus it was the tallest building at the intersection. It was known as the Van Cott Block building and the large clock that crowns the roofline is an advertisement for A.B. Van Cott, who specialized in watches and jewelry. Albert Barthoff Van Cott had moved here in 1850 from New York City, where he had been a jewelry and watchmaker since at least 1839, and by 1880 had a similar business in Chicago.

The building obviously had a mixture of uses. The main tenant was Louis Lipman, a lithographer, engraver and printer who printed a well-known view of Milwaukee in 1866. The ‘Gold Pen’ sign is an advertisement for Charles H. Clarke, who manufactured gold pens!

The flour merchant is unidentified as is the proprietor of the saloon offering Blatz’s lager beer. Blatz Beer had been founded in 1851 and continued as a local company until 1959, when the label was sold to Pabst Brewing Company. This area of the city was filled with tiny saloons like this.

Today this corner is occupied by the First Financial Centre, an office building that was constructed in 1928, but later had its entire facade rebuilt. The BizTimes recently reported that a hotel of up to 190 rooms could be built in the building’s vacant office space.