Why is Anonymous 4 So Popular?

The superstars of early music are back in town, and good luck getting a ticket. 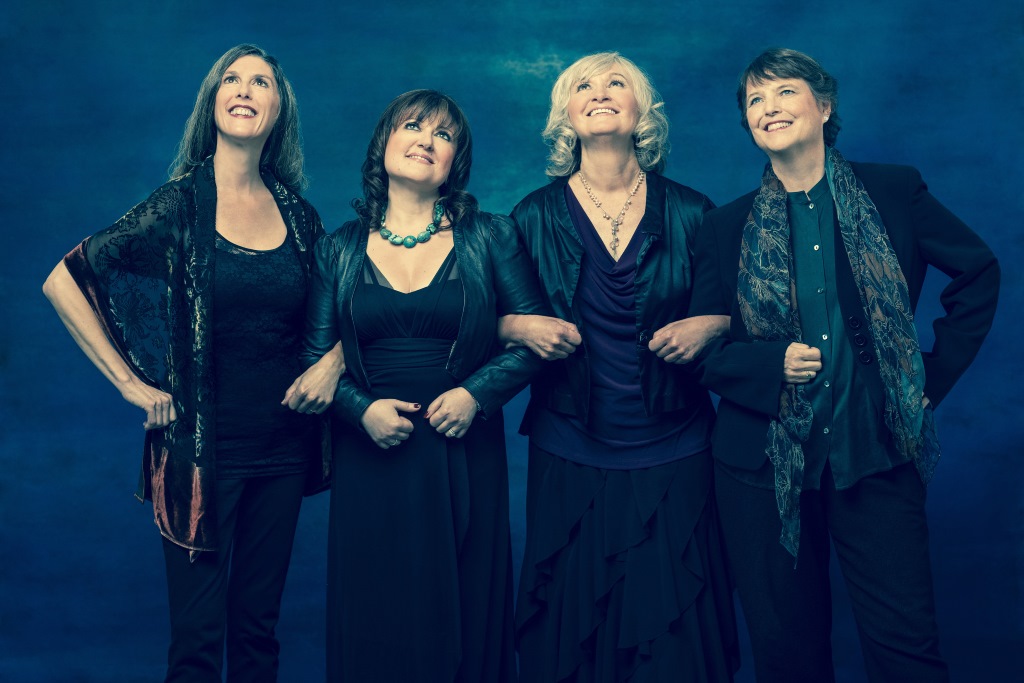 Anonymous 4, a four woman a cappella quartet, continues a farewell tour with a concert in Milwaukee this Saturday night. Early Music Now first brought the group to Milwaukee in 1992. Now Anonymous 4 returns for a seventh and final concert. They end their 30 years with three of the original four members – Ruth Cunningham, Marsha Genensky and Susan Hellauer — still performing. Jacqueline Horner – Kwiatek joined the group in 1998.

Their final concert, hosted by Early Music Now this Saturday at the Basilica of St. Josaphat is sold out. They are also performing Sunday in Chicago (see below) for which tickets are available.

Only a few Early Music groups rise to the position of superstars. Before we knew what “going viral” meant, a quartet of women singing songs from the 10th-15th century found their albums rising to the top of a classical music charts.

Those new to the group and without a ticket should visit the Anonymous 4 website to peruse their available recordings, read the rave reviews of customers on Amazon and check out samples on YouTube. However, listening on YouTube bears little resemblance to owning a audiophile quality Harmonia Mundi recording.

Reviews of the group attest to their remarkable qualities:

All this music has been delivered with a trademark blend of ethereal, almost disembodied vocal tone and expressive urgency. The resulting performances, at their best, have boasted an unearthly beauty that still felt resolutely human.
— Joshua Kosman, San Francisco Chronicle

The members’ voices functioned like different pipes of a church organ, each with distinctive colors yet unified as one instrument: the pure silver emanating from Ruth Cunningham; the honest, direct quality of Marsha Genensky; the husky depth of Susan Hellauer; and the yearning voice of Jacqueline Horner-Kwiatek.
— Elizabeth Bloom, Pittsburgh Post-Gazzette

The usual Anonymous 4 concert would focus on a well researched particular period, saint, liturgy or manuscript. This concert will be an anthology of some of their favorites. Five of the albums they have published focus on the Christmas season. Appropriately dubbed, “The Last Noel,” this concert will select from those albums.

But “don’t call this Christmas music” warns Thallis Hoyt Drake, the founder of Early Music Now who first brought the group to Milwaukee. I think she meant that we should not conflate this concert with the usual Christmas song event. “These songs are echoes of the past,” Drake says. “Anonymous 4 brought back to our ears something that has been dormant for centuries. This is something that the human ear has longed for, for a long time.”

The music in this program spans hundreds of years, from St. Godric’s mystical vision-born song, to the living, traditional Christmas songs of Ireland and America. …We sense a common purpose in these works. As if in response to the quiet force of a supernatural moment, when the paths of humanity and divinity meet, the composers of these songs marked each piece with some special characteristic, making each a universe in itself, and making each a unique artistic response to the Christmas story.

The Anonymous 4 will perform Saturday at 7:30 P.M. in Saint Josaphat’s Basilica, 2333 S 6th Street at Lincoln Blvd. The 75 minute concert will be performed without intermission. Program notes may be reviewed online.

Haven’t got tickets? Anonymous 4 will be performing the next day, Sunday, December 20 at 4:00 P.M. in the Rockefeller Memorial Chapel on the University of Chicago campus. Astonishingly, many tickets are still available.

Early Music Now will next host the Baltimore Consort in a concert “The Food of Love” featuring music of the Elizabethan era – with songs and consort music from the Shakespeare plays. The concert will be held at St. Paul’s Episcopal Church, 914 E. Knapp Street on Saturday, February 13 at 5:00 P.M.

One thought on “Classical: Why is Anonymous 4 So Popular?”