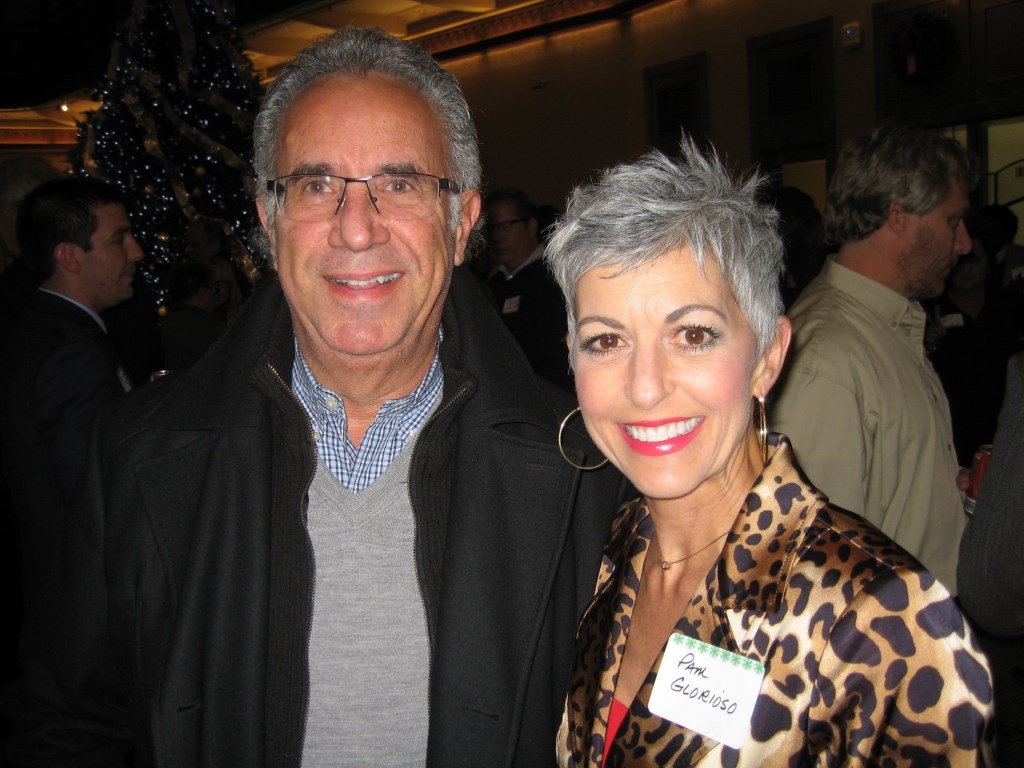 Volunteers from the City of Milwaukee’s 35 Business Improvement Districts [BIDs] were honored at a Mayoral reception Thursday, December 3rd at City Hall. The event, held in the rotunda of the Great Hall of the People, highlighted the social as well as economic impact of the organizations, ranging from the granddaddy of all BIDs, #2, The Historic Third Ward (created by the city under state statute in 1987) to S.13th – W. Oklahoma BID #50, which just commenced operations this year. [Some BIDs have been disbanded over the years, leading to the numerical disparity.]

Mayor Barrett opened the proceedings with brief remarks thanking the BID volunteers and staff for their contributions to the community. He also complimented Ald. Michael Murphy, the Common Council president, for his work on behalf of the small retailers in the city. Barrett also pointed out the close cooperation of BIDs and the Milwaukee Police Department, represented by Chief Ed Flynn, attired in street clothes of a trim grey suit and a conservative rep tie. The MPD routinely has its community officers attend BID meetings with updates of recent trends and to get feedback from merchants and business people.

Mike Coakley from King Drive BID #8 was there representing that important and long-overlooked commercial corridor which the city has taken pains to preserve.

The Mayor’s Chief of Staff, Pat Curley, was there chatting up Ron San Felippo, of the Historic Third Ward BID, which operates two parking garages and a Public Market and owns the building housing the popular Benelux restaurant.

BIDs are big business, without a doubt.

Curley, who has been on the job for the entirety of the nearly 12 year Barrett administration, enjoys a job security unrivalled for the position. Norquist had at least four chiefs over his (almost) three terms.

Even Carl Sandburg only lasted two years when he occupied Curley’s office a century ago. Sandburg then went on to win two Pulitzer Prizes (history and poetry) and a Grammy (best spoken word album.) What does Curley have to show for his decade of drudgery? No poems has he written, though he has offered some memorable quotes over the years, none of which, alas, comes to mind.

Brady Street BID #11 was well represented with a special appearance by Marlene Garacci, a Department of City Development retiree who serves as recording secretary of the BID. She sat with Teresa Morton, a BID director and president of the neighborhood association. Morton owns Frame and Fabric at 1601 N. Van Buren St. and says she is loaded up with the former commodity, which she purchased as a lot from the former Brady Street hardware store at its clearance sale. There is not much room in her small store for much more than the multitude of frames, she said.

The news around the BID table is that the old hardware store might become a restaurant under the management of the Knick. That’s the kind of thing you hear when BID people get together.

Julilly Kohler, a founder of the Brady Street BID, and a current board member, posed for a photograph with the mayor and chatted up DCD Commissioner Rocky Marcoux. Steph Salvia, the director of the BID as well as the Downer Avenue BID #41 was there, as was board member Teri Regano, the owner of Regano’s Roman Coin.

Pam Glorioso added a stylish note to the proceedings, which she cannot help but do. Her husband, the grocer Mike Glorioso, provided a muted counterpoint to her leopard skin outfit. Once you get him out of his apron, Glorioso does cut a dashing figure. He says the company’s old store at 1018 E. Brady St., which has been closed since the December 2011 opening of its new outlet across the street, would come to life once again as a cooking school.

Asked if the Glorioso market had reached his initial projections after five years, Glorioso answered in the affirmative. “Right where I pegged it would be by now,” he said.

The kicker: “But back when I went to the bank for financing, they wouldn’t accept my projections. Wouldn’t believe it. Made me cut my projections in half before they would lend me money,” Glorioso said. Ha-ha! The joke’s on you, bank.

Ghassan Korban, head of the city Department of Public Works, which provides an important interface for neighborhood improvement programs, was also at the event. BID districts like things such as bicycle racks, pedestrian safety improvements and traffic calming measures. These are all elements of his vast domain. Preston Cole, the DPW Director of Operations, was also at the event.

Jim Plaisted, the BID executive whose consultancy includes BIDs of Shorewood and Wauwatosa also was at the party. Catering was by Saz’s and included crudites, some unidentified yet tasty cheeses, and bunned food of bovine and porcine origin.

A pair of sheet cakes baked by Terrazas Cakes & Pastries, 2474 S. Kinnickinnic Ave. (BID#44) were emblazoned with the City of Milwaukee logo, and the words, “Thank You.” Departing guests were treated to blue coffee mugs with the city’s logo.

Kohler said it was nice that the city put on the party for the districts. Speaking for Brady Street, and in a sentiment undoubtedly shared by her counterparts across the city, she said, “We volunteer BIDs do a lot of work for the city.”

What is a BID?

A Business Improvement District is a mechanism allowing retail businesses in a designated area to pay an annual assessment that appears on the tax bill and is based on property value.

The BIDS, with boards appointed by the mayor, then disburse those funds according to their charters and mission statements. Common uses of BID funds include street maintenance, advertising, holiday decorations and costs related to festivals and special events. Some BIDs employ full- or part-time professional administrators. Board members and staff are usually the most informed in their communities as to available real estate and commercial activities. The BID mechanism also makes it much easier for neighborhoods to secure permits and insurance for special events. The average BID has a budget of a little under $200,000, while the giant among all BIDs is Milwaukee’s Downtown BID#21, with a budget of over $3 million. 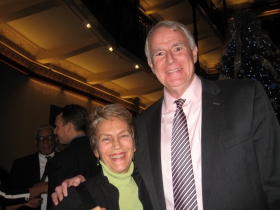 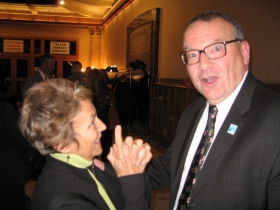 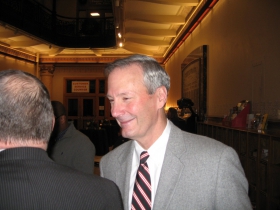 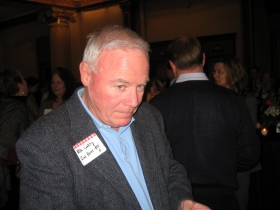 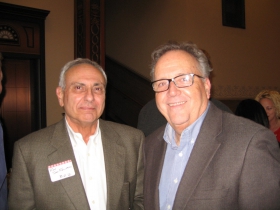 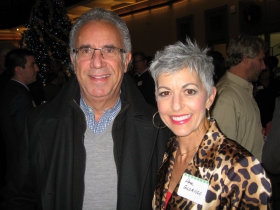 Santa Claus will make an early morning appearance at the Y-Not II CoffeeTails, 1506 N. Van Buren St., when he is to scurry down the chimney at 6 a.m., Sunday, December 13th to collect donations for the annual Journey House toy drive.

Claus, of the North Pole, will be travelling to the cocktail lounge unaccompanied by his wife, which is the way things usually go at this Lower East Side tavern / lonely hearts’ club. Many patrons’ wives don’t even know the place exists, and their husbands like it that way.

Mrs. Claus, who claims to have a headache, will be represented at the gala by Germaine Bowers, who originated the toy drive four years ago and has seen it grow to mountainous proportions since then. Last year’s haul consisted of two full sleighs of goodies that were whisked to Journey House, 2110 W. Scott St. for wrapping and distribution to children under 12 at a special event held just for them. “I just can’t bear to think of children not getting gifts on Christmas,” she said.

The gifts will be presented to the children at “Winter Wonderland,” a special RSVP-only event, to be held Saturday, December 19th. Mrs. Claus has indicated that she plans to attend that occasion accompanied by her husband of over 1,700 years. Mr. Claus, who was born March 15, 270 AD in Patara, Lycia, also holds the rank of Saint in the Roman Catholic Church, and is properly styled as “St. Nicholas” for ecclesiastic purposes.

But there will be none of that formal stuff at the Sunday morning flapjack and waffle fest. Santa promises he’ll get plenty wasted in keeping with the spirit of the tavern whose motto is, “You Can’t Drink All Day Without Starting in the Morning.” Santa’s favorite pancake topping is Grand Marnier and Whipped Cream, both of which will be available for enjoyment by the general public as well as by his Holiness.

Bowers promises “prizes, food and fun” at the event, and has gathered a number of door prizes from supporters to distribute to the attendees. She has already received hundreds of dollars in cash donations, which she has converted into toys by virtue of non-stop shopping trips over the past few weeks. She has provided more toys for kids than all of the elves in Santa’s workshop combined.  Customers, friends and neighbors have also brought in boxes of gifts for the children. Toys and other gifts, including cash or checks, are accepted any time prior to Tuesday, December 16th. Check here for more info.

3 thoughts on “Plenty Of Horne: All Hail Our Business Improvement Districts”