In 98% of cases they have none. Those with attorneys get off easier. 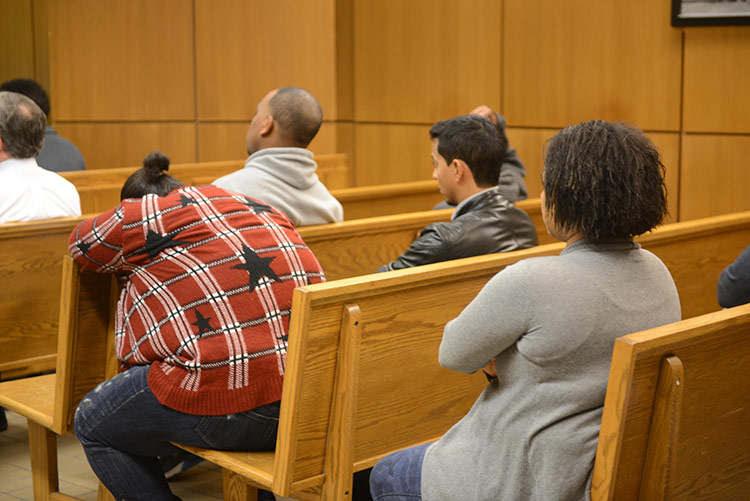 Most defendants go to Milwaukee Municipal Court without an attorney. Photo by Sue Vliet.

Peter Starck faced thousands of dollars in fines and restitution after he was given a citation by Milwaukee police, who accused him of destroying a downtown hotel room in December 2014.

Instead of going it alone in Milwaukee Municipal Court, the 48-year-old was able to find a lawyer to fight the vandalism charge, resulting in the dismissal of his case eight months later.

“The little guy doesn’t have a chance” without a lawyer in municipal court,” he said. “There are a zillion reasons why people should get an attorney. It saved me thousands of dollars and then if I didn’t have the money to pay, I would have gone to jail.”

Starck is one of very few defendants who have enjoyed legal representation in the Milwaukee Municipal Court. Of the 434,463 citations written from 2011 to 2014, defendants had attorneys in only 2 percent of cases and far fewer than 1 percent were taken to trial.

The percentage of defendants with attorneys was significantly smaller for cases in poor neighborhoods. For example, in the 53206 ZIP code, one of the poorest in Milwaukee, lawyers were involved in only 231 (.6 percent) of the cases and only 91 (.2 percent) were taken to trial of the 41,900 citations written between 2011 and 2014. 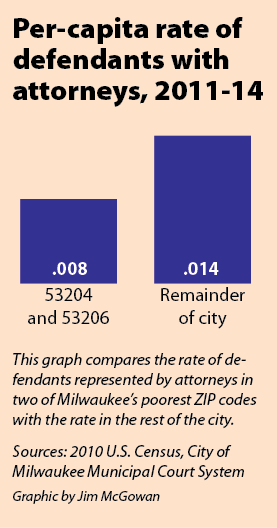 Per-capita rate of defendants with attorneys, 2011-14

In that same time period, fewer than one out of every 10 cases (8 percent) without an attorney were dismissed, while more than half of the cases (57 percent) involving an attorney were successfully defended, according to data from the court.

A defendant without an attorney in municipal court is at a huge disadvantage because he does not know the law or court procedures and he will miss holes in the prosecutor’s case that most attorneys would catch and exploit, according to local legal experts.

However, defendants said hiring a lawyer is a risky proposition, even if they claimed they were innocent. For example, a lawyer’s fee of $200 on top of a possible $200 fine doubles the cost of the case. For a defendant who works full time making $7.25 an hour, the minimum wage, that $400 in legal fees and fines if they lose their case represents more than a week’s pay.

“Many people just can’t afford to get their own lawyer,” said Don Williams, 24, as he walked out of the Milwaukee Municipal Court after paying the last of $1,900 he owed in fines on several cases in which he did not have a lawyer

Some defendants said that having a lawyer in municipal court is self-incriminating.

“There’s an aspect of guilt associated with having a lawyer,” a young college student who declined to give his name said as he waited alone for his case to be heard by a judge. “There is a chance of a case getting dismissed, but a lot of people here I’m guessing can’t imagine paying a lawyer.”

Some defendants were unaware of their rights, saying they were not allowed to have a lawyer because their case was too minor, while others said it was not worth the overall hassle to hire someone to represent them.

“The cost of getting a lawyer would have been more than what my ticket is,” said Sharon Williams, 44, as she left the court after agreeing to pay a $150 fine. “I would rather just pay the ticket to get the court off my back.”

In general, defense attorneys have much more access to city attorneys than defendants without attorneys. This access allows attorneys to negotiate deals for their clients. For instance, when city attorneys are prosecuting a case, they are obligated to return calls and emails from a defense attorney, said Christopher Ehrfurth, a lawyer who defends clients in the Milwaukee Municipal Court system, as he exited the court building.

“If you are an attorney and send another attorney an email about a case, they generally are going to have to respond to it or they are going to have a problem in court,” said Ehrfurth, noting that municipal court judges will admonish prosecutors who do not communicate with defense attorneys. “If you are just a person that doesn’t have any knowledge of that system, you probably won’t even have (the prosecutor’s) email and probably won’t even be able to find their email address.”

Municipal court is fundamentally different than other courts in that it allows judges to advocate for a defendant who does not have a lawyer, according to Municipal Court Judge Derek Mosley. For example, in circuit court where more serious cases are adjudicated, judges are generally barred by law from talking directly to defendants without counsel present.

“That’s part of my job,” said Mosley, who added that defendants with lawyers do better in court, but realizes that they are typically out of financial reach for many defendants. “What’s great about here is that I can have conversations with defendants and ask them questions … (you) truly get your day in court.”

When he feels the defendant has not thoroughly questioned a witness on the stand, Mosley will step in and ask questions himself. He also allows defendants to take the stand and just tell their story, giving defendants much more legal leeway than city attorneys.

“Things that I allow (defendants) to do, I would never allow (city) attorneys to do because they know better,” he said. “I protect defendants.”

A man in a suit entered the packed waiting area at the Milwaukee Municipal Court. He quickly found his client, a middle-aged Hispanic man wearing jeans and a T-shirt, and cheerfully said hello. He placed a case folder on a shelf attached to a pillar in the middle of the loud, crowded room. They huddled over the folder, softly discussing the case.

Moments later, the pair strolled down the center aisle of the bustling courtroom. They passed dozens of defendants without attorneys, who glared at them as they arranged themselves on the hard wooden benches for the long wait to eventually see the judge.

The judge sat perched above the courtroom, waiting for the lawyer and his client to make their way to the front. The judge and attorney scheduled a trial date. Then, as quickly as the attorney and his client arrived, they were gone.

The ability to move rapidly through the municipal court system is a luxury for defendants who can afford a lawyer, while those too poor to pay for representation experience a much slower court system.

“We put the attorneys first,” said Vince Bobot, a former city attorney and municipal court judge who continues to practice law in Milwaukee, handling immigration, traffic, family and various general law matters. “The reason why attorneys are going first is because otherwise we would have no attorneys in the system at all.”

“You have to have attorneys there to check the power of the state, otherwise the police have total control,” Bobot said.

If city attorneys “have to go against someone who is prepared and knows how the system works, then they’re going to be more likely to say, ‘I’m going to give you this deal so I don’t have to deal with you,’” added Ehrfurth.

Ultimately though many defendants just do not have enough money to pay for legal representation and, as a result, do not get the justice they deserve, Ehrfurth said. “They can’t afford us,” he said. “It’s really sad to see how money prevents people from getting fair outcomes.”