Protestors protested as Republican presidential candidates debated. So who won? 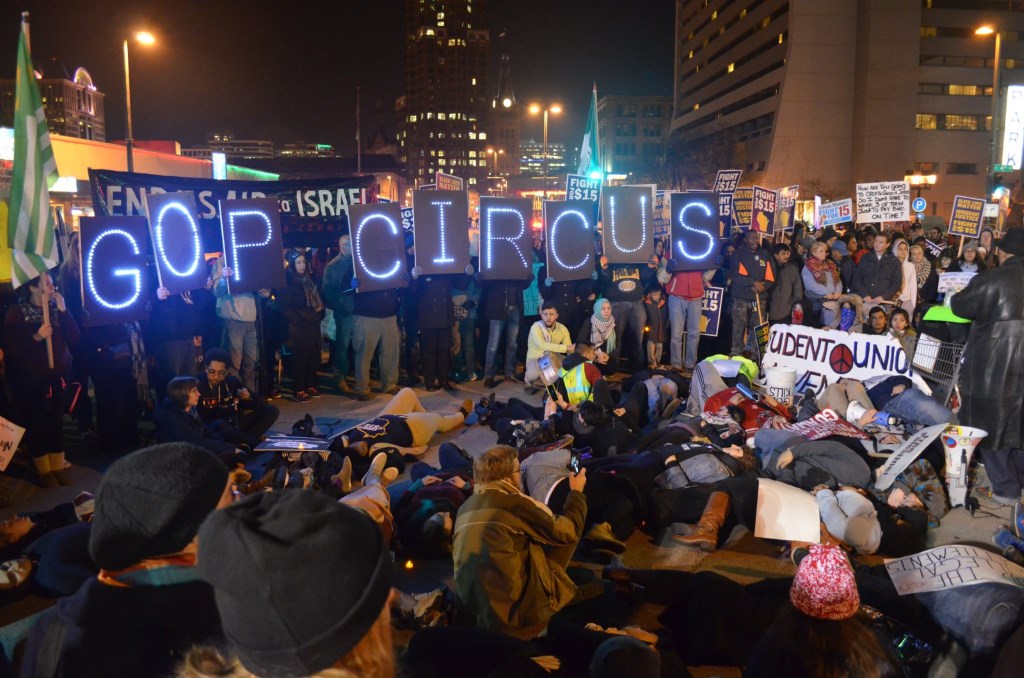 Wow, what a great place Wisconsin is.

I hadn’t quite realized just how exceptional until I watched last night’s Republican presidential debate and the lead-in about the state where the debate was taking place, Wisconsin! “The cradle of American industry,” the voiceover for the Fox Business Network told us, as scenes of Harley Davidson and Miller Brewing (whose home office is actually in Chicago) flashed on the screen, “where legends of are forged” (photo of the Packers winning the Ice Bowl), “where their spirit remains strong,” and where you can see a lovely lakefront, happy cows and scrumptious forests thick with autumnal leaves that somehow haven’t begun falling three weeks after the fall colors have peaked.

Not only that, but Wisconsin seems to be a bastion of Republicanism, “the birthplace of the Republican Party” (in Ripon, WI, folks), where Abe Lincoln campaigned, for Pete’s sake, and where Ronald Reagan campaigned! (No word about Herbert Hoover.) And where Teddy Roosevelt was shot and spoke in this very theater (though, technical note, it was called the Auditorium back then) with a bullet still lodged in his chest. But no mention of the fact that Wisconsin hasn’t voted for a Republican for president since 1984, more than three decades ago. Nor any footage of the protestors outside, who were thinking very un-Republican thoughts.

For that matter, it’s hard to imagine that TR, the old trust buster and progressive Republican, would recognize the party’s standard bearers of today. At center stage in the debate were two non-politicians who were essentially tied for the GOP lead, according to Real Clear Politics’s aggregation of all polls, Donald Trump and Ben Carson, each chosen by nearly 25 percent of those surveyed, with all the experienced politicians far behind: Marco Rubio at nearly 12 percent, Ted Cruz at 10 percent, Jeb Bush at 6 percent.

Republican politicians have no one to blame for themselves for this situation. Beginning with Reagan, who declared that “Government is not the the solution to our problem, government is the problem,” Republicans have steadily increased the attacks on government and politicians, until candidates now compete to see who can offer the nastiest condemnations. “Washington is fundamentally corrupt,” Cruz declared last night; “government keeps getting bigger and more corrupt,” candidate Carly Fiorina declaimed.

And then Republicans wonder why two non-politicians, sleepy Dr. Carson and bumptious businessman Trump, continue to hold the lead. Doh. The message that government is evil has been received loud and clear by Republican voters, and the candidates with experience in government continue to lag far behind the outsiders, no matter how silly or simplistic their policy positions.

I doubt this debate will change that much. It was all but out of control at times, as the Fox moderators seemed afraid of imposing themselves too much, leaving little rhyme or reason as to when candidates did or did not break in with unrequested followups. All that could be counted on was that Fiorina would go on and on in long speeches searching for an ending that never seemed to come while she blithely ignored the time limits. Maybe that’s why she was fired from Hewlett-Packard.

The moderators did briefly address the protestors, noting that many were there to demand a $15 minimum wage. (Other protestors were there to protest the killing of Dontre Hamilton, adding a “Black Lives Matter” theme.) The first question was whether candidates would support a $15 minimum wage and — surprise! — nobody did. No, there weren’t revelations to be had in the Milwaukee Theatre, though it was nice to see a show of any kind booked at the facility.

So who did the best? From worst to best, here’s my take:

8. Ben Carson: He had no gaffes, followed the time limits and was (yawn) the perfect gentleman. As a result he disappeared from the debate for long stretches at a time. But he was no worse — or better — than in other debates and continues to prove he’s a political neophyte who dislikes the media, and that’s apparently all it takes to keep him high in the polls.

7. Donald Trump: He was booed twice. Is that a record for a presidential debate? He also got less exposure as others hogged more air time. He did hold his own on illegal immigrants, under withering fire from Kasich and Bush, saying “We’re a country of laws. We either have a country or we don’t have a country. We are a country of laws.” But he looked foolish ranting about the problem of China in the Trans-Pacific Free Trade agreement after Paul pointed out that China isn’t part of the agreement.

6. Carly Fiorina: There’s a reason she had slipped in the polls after beginning to rise from nowhere. She’s simply not very likable. TV is a merciless medium and Fiorina comes off as slightly smarmy. Her smarty pants take-down of Trump, who said he’d met Russian leader Vladimir Putin when both were on “60 Minutes,” was this:“I have met him as well, not in a green room for a show, but in a private meeting.” A good slap at Trump, but delivered in a way that left you cringing.

5. Rand Paul: Paul is always smooth and un-ruffled and holds his own in mini-debates like his tussle with Rubio over foreign policy. And his argument that he’s the only true conservative — he really means fiscal conservative — is powerful, but Republicans have been using scare tactics about Islamic terrorism for 14 years now, and Paul’s isolationism continues to make him a fringe candidate.

4. John Kasich: Kasich has improved and had some strong moments last night. At one point he offered a quick world tour of his foreign policy views that was smart, succinct, yet not simplistic. And he chased Trump on illegal immigration with great impact. “But for the 11 million people – come on folks – we all know you can’t pick them up and ship them back across the border,” he said. “It is a silly argument. It is not an adult argument.” But Kasich over time began to butt in with unrequested interjections too often and got tiresome. He actually got booed for a line suggesting that if a bank bailout was needed he would only help the less wealthy bank creditors. Kasich lacks gravitas and I suspect also leaves many red meat Republicans thinking he’s — the horror! — a moderate conservative.

3. Jeb Bush: Finally banished his inner accountant and showed some passion. For the first time he seemed like, well, Jeb! He gave as good as he got, battling Trump on immigration, saying Democrats will love Trump’s stand (because it will lose the GOP the vote of Latinos), and had probably the best of countless anti-Hillary lines: “It may be the best that Hillary Clinton can do. It’s not the best America can do.” Did Jeb do enough to raise his poll numbers? Probably not. But this could stop his decline.

2. Ted Cruz: This is a bomb-thrower that many Republicans in the U.S. Senate can’t stand, yet he continues to come off in debates as a smart, impassioned truth teller (whatever the actual truth of his remarks). A classic line: “There are more words in the IRS code than there are in the Bible. And not a one of them is as good.” (Gee, Ted have you read Leviticus? I think I’d prefer the tax code.) Cruz spoke longer than anyone, ignoring time limits, yet looks cool and calm doing so. He continues to effectively stake out the far right and looks like he’ll have more staying power than Bush.

1. Marco Rubio: He’s a master at oratory that combines pithy specifics with a powerful overarching theme, and blends his own life story with political policies to reach an emotional impact. He’s also a devastating counter-puncher, who proved that in a previous debate when Bush went after him and proved it again in last night’s mini-debate with Paul, where Rubio’s ringing declaration that America must be the strongest nation in the world generated huge applause. Rubio had the best line of the night, (on the importance of vocational-technical colleges): “Welders make more money than philosophers. We need more welders and less philosophers.” Yes, we all know those philosophers are elitist Democrats, so why not graduate more welders? Rubio connects to listeners on an emotional level in a way that (unlike Trump) should not wear thin. Small wonder the betters in the futures market have him as the most likely to win the nomination. 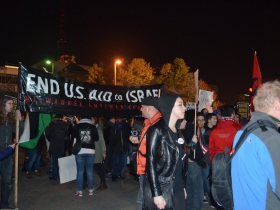 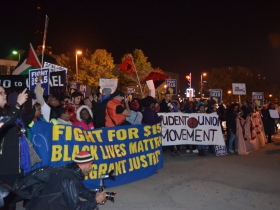 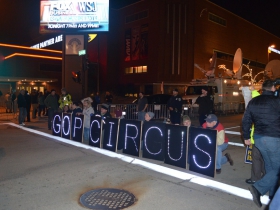 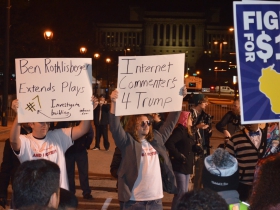 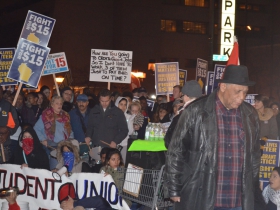 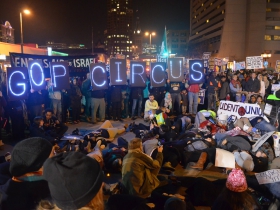