By Tamarine Cornelius, Wisconsin Budget Project - Nov 11th, 2015 11:05 am
Get a daily rundown of the top stories on Urban Milwaukee

A new proposal that would limit opportunities for voters to approve new resources for schools would in practice require districts to wait as long as three years after an unsuccessful referendum before trying again, significantly longer than the minimum two-year wait specified in the bill.

The state limits the average amount each school district may spend to educate students, but voters in a district can override the spending limit by approving a referendum lifting the spending caps.

Currently, school districts have significant flexibility in when they ask voters to approve new resources. Some lawmakers are seeking to reduce that flexibility, by requiring districts to wait at least 730 days – two years – after an unsuccessful referendum to put another referendum before voters. Under the proposal, Assembly Bill 481, districts would also be limited to scheduling elections at the same time as the annual April elections or the November elections in even-numbered years.

The combination of the two year wait and the limited days on which districts can hold the elections means that districts could be forced to wait as long as three years after an unsuccessful referendum to attempt another. For example, a school district that held an unsuccessful referendum in 2015 would be required to wait until 2018 to hold another one if the restrictions had been in place. That’s because only 729 days pass between the April 2015 election and the April 2017 election – just shy of the 730 day requirement – and there is no fall election in 2017, pushing the next potential referendum election into 2018. 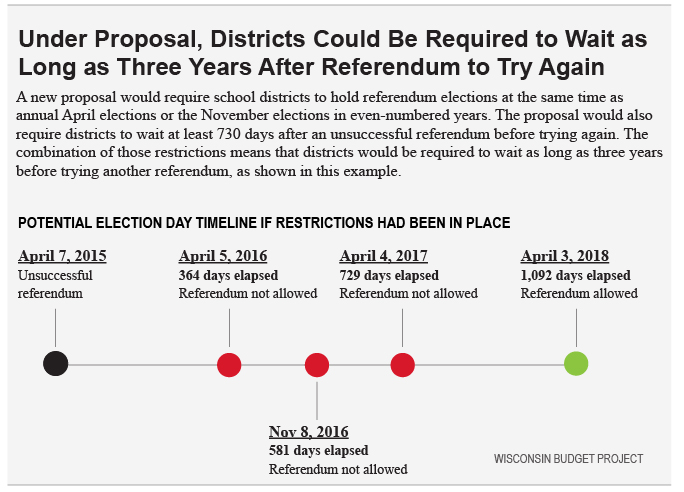 Under Proposal, Districts Could Be Required to Wait as Long as Three Years After Referendum to Try Again

A waiting period that stretches to as long as three years would hurt both voters and schoolchildren. Voters should have the opportunity to approve new resources for their local schools without interference from state lawmakers, and long periods during which referenda are not allowed would reduce the ability of local residents to govern their school districts. Schoolchildren find it harder to learn in the crowded classrooms and unsafe environments that school districts often try to avoid by going to referendum.

Read more about how this proposal would reduce resources for children in public schools: Proposed Limits Would Make it More Difficult for Voters to Approve New Resources for Schools