The Salad Days of Mac DeMarco

The Canadian’s jangly alt pop has made him a rising star, performing at the Riverside. 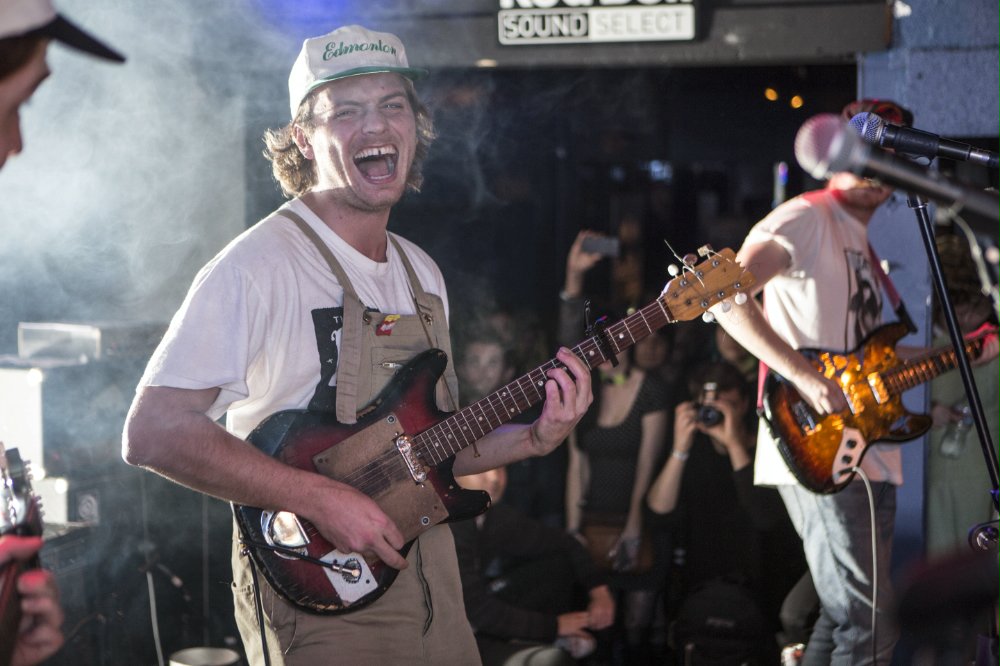 Mac DeMarco’s rapid rise to indie cult status may be a mystery to the folks at Milwaukee Record, but the man himself is anything but mysterious, which is the main reason he’s so popular. Punch his name into YouTube and you’ll get a trove of results. Apparently DeMarco is incapable of turning down an interview request. Whatever you think of his jangly alt pop, DeMarco is a lovable dude. He combines a goofy Canadian sense of humor, millennial irreverence, freak-out video aesthetic and hip-hop generation sensibilities. My girlfriend’s 10-year-old son turned me onto DeMarco and one YouTube binge later I was an instant fan.

It’s hard to say if DeMarco would have been as successful before the Internet. His cult of personality has propelled his career and made him a music festival favorite. The modern festival is just as much a party as it is a place to appreciate music, and DeMarco is the kind of guy you want to hang out with. His stage antics are entertaining and endearing, like the time he sang “Still Together” at Pitchfork with his girlfriend on his shoulders. He appreciates his fans so much that he gave out his home address in Far Rockaway, Queens at the end of his last album, inviting listeners over for a cup of coffee. He does not regret the decision or all the visitors.

DeMarco grew up in Edmonton and moved to Vancouver after high school. He came up in the Vancouver music scene in the late 2000s alongside bands like Peace, Apollo Ghosts and Japandroids. At the time DeMarco worked on psychedelic video projects and his first musical endeavor was a self-produced album called Heat Wave under the name Makeout Videotape.

In 2011 DeMarco moved to Montreal and began his solo career in earnest, making ends meet with road paving gigs and strange medical experiments. In 2012 he released a mini-LP entitled Rock and Roll Night Club that he calls his “Chopped and Screwed” record, a reference to slowed-down, codeine-influenced, Houston hip-hop. The Brooklyn-based label Captured Tracks dug it so much they agreed to release his full-length debut, called 2, with album art that’s uncannily similar to Bruce Springsteen’s The River.

The critical reception of 2 was decidedly positive and DeMarco was championed by tastemakers like Pitchfork. His “slacker/stoner” persona has attracted legions of teenage fans, but his work ethic is something else entirely. In his home studio, where DeMarco plays and records all of the instruments himself, he is focused and prolific.

His excellent follow-up record, Salad Days, came in early 2014. This summer saw his latest releases, the mini-album Another One and the instrumental project Some Other Ones. DeMarco and his band tour incessantly. Their escapades in Asia and Australia were captured in the mini-documentary Mac DeMarco – Pepperoni Playboy.

When I asked my girlfriend’s son what he loves about DeMarco his response was, “I don’t know, I just kind of do. Then again, I really like his melodies.” Despite DeMarco’s screwball demeanor, he has a keen understanding of how to craft a pop song and he’s a terrific poet. He mostly writes love songs about forlorn characters. His music is breezy, catchy and imperfect, the result of his analog tape recording process. (“You want to know my trick kids, it’s pitch control.”)

DeMarco’s records have this warm quality that remind me of the 70s and 80s pop music of my early childhood. In a live setting DeMarco and his band turn it up a few notches and transform his rickety ballads into crowd-pleasing jams. Originally scheduled at the Pabst, overwhelming demand pushed his Friday night performance to the Riverside. Opening for DeMarco will be his Vancouver buddies Alex Calder and The Courtneys.