"Milwaukee has such grand potential to become a leading bike friendly city. " 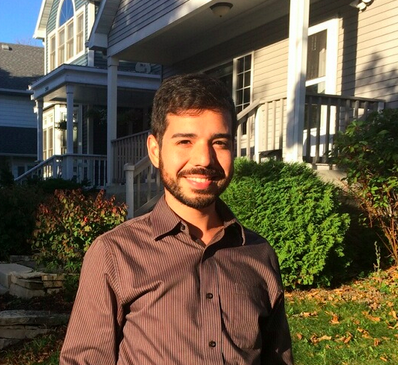 I am a project coordinator for the Wisconsin Bike Federation working on a community effort called Connect 53212. A team of community liaisons and I encourage neighbors in the 53212 zip code to walk, bike, and bus more. We do this by talking to people on their doorstep about how they get around and offer free information like maps, safety tips and reasons to get around without a car. We also host lots of walks and bike rides to help people explore their neighborhood a little more and foster a culture around active ways of getting around. The 53212 zip code includes Harambee, Riverwest, and Brewers’ Hill, so a lot of our outreach focuses on bridging that Holton Street divide that segregates our communities.

Before moving to Milwaukee last November I never thought I’d see myself leaving the friendly confines of Chicago’s Pilsen neighborhood. That neighborhood has everything I value: culture, community activism, and all of the taquerias and bakeries. Over the previous couple years, my long-time college friends, Lauryn and Nathan, would constantly try to lure me into visiting them and when I did, would always bring up the conversation of when I would be moving to Milwaukee. I was skeptical yet intrigued as to what they saw in Milwaukee to warrant uprooting their lives away from Chicago. It didn’t take very many visits to understand how amazing Milwaukee really is. It’s chock full of street fests, a top notch music scene, plenty of parks and bike trails, plus it has a humble small town vibe. The job opening at the Bike Fed sealed the deal. My friends were gracious enough to take me in.

Better bike infrastructure. Milwaukee has such grand potential to become a leading bike friendly city. With its wide streets, low levels of traffic, and access to a plethora of trails it is just prime for an upgraded bikeway network. After talking with hundreds of people about how they get around, I learned that most would bike places if they felt safe enough. That comes from a real fear of getting hit by cars. One form of segregation I can get behind is separating car traffic from bike traffic. Protected bike lanes use barriers to keep cyclists away from fast moving and sometimes distracted drivers. By encouraging more people to bike we can build a healthier, cleaner, and more economically prosperous Milwaukee. Bikeways are the future. Other cities are catching on while Milwaukee is falling behind.

Is there an issue you believe all Milwaukeeans should turn our attention to?

Drivers don’t yield to pedestrians in Milwaukee. In many west coast cities, people crossing the street assert their dominance as the most vulnerable user of the road by stepping out in front of cars and people driving will actually stop. It might be the driving culture here, the sentiment that cars rule the road that keeps people stuck at an intersection trying to cross the street for way longer than they should. It also goes both ways. People crossing the street accept the status quo that they should wait until it’s clear before exercising their right to cross in a crosswalk without getting hit. Just a reminder: all vehicles (yes, even bikes) must yield to pedestrians crossing in the crosswalk.

Ever heard of geocaching? It’s a GPS based game where you go out and find hidden treasures that other people hide in public places. Milwaukee has loads of them. Sometimes you have to solve riddles and decode letters to unlock hints. It’s a great way to explore Milwaukee or any city really. It’s played all over the world. Check out geocaching.com if you’re exploring bug is biting.

What is the most effective way to implement change in Milwaukee?

While working for Chicago’s DOT, I noticed a lot of top-down approaches to change. Whatever the mayor wanted, happened. Like the unfortunate closing of 50 schools on the south side or on a more positive note, 100 miles of protected bike lanes. Constituents have a voice in Chicago, but for the most part could only influence changes on a very local level. In Milwaukee I quickly learned that a community has much more power in creating change and influencing our leaders. A gathering of just a dozen people surrounding issues of public safety or access to transit will draw the attention of Alderpeople and City Engineers. City staff actually care and will seriously consider neighbors’ requests when asked respectfully. That’s something that Milwaukee residents should not take for granted.