Some do. New program pushes 100 area companies to join the effort.

By Jabril Faraj, Milwaukee Neighborhood News Service - Oct 8th, 2015 11:57 am
Get a daily rundown of the top stories on Urban Milwaukee 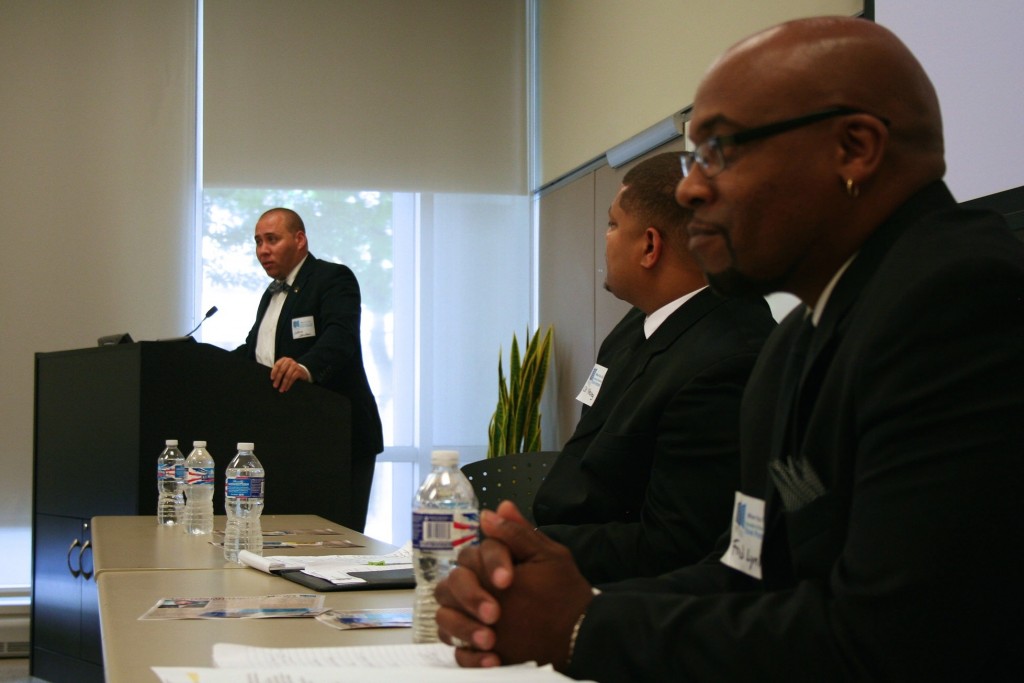 Joshua Johnson was 17 years old when he went to prison. After 10 years, Johnson was free but without work. Considering his background, the outlook was grim.

One day, he was filling out an application for a construction company when he overheard an intern say he wouldn’t hire anyone who had been to jail. But the job superintendent, who was sitting nearby, looked up and said, “If someone’s desperate enough to steal money, they’re desperate enough to come to work every day.”

“Before that, I felt defeated. When I heard him say that, it changed my whole outlook on life because that’s when I realized that all somebody needs is a chance,” said Johnson, who eventually got the job and went on to have a six-year career in construction and now works for the Wisconsin Bureau of Apprenticeship Standards.

Pro Trade Job Development, a training and job creation program for unemployed individuals and ex-offenders, recently announced the beginning of a push to secure commitments from 100 area companies to hire a total of 100 individuals in 2016 who have graduated from the Pro Trade program. The company held the first part of a two-day conference for employers recently at Manpower Group’s Milwaukee headquarters.

“That does not seem like a huge number when you have great partners,” said Rashaad Washington, owner of Pro Trade. “It’s not outlandish.” 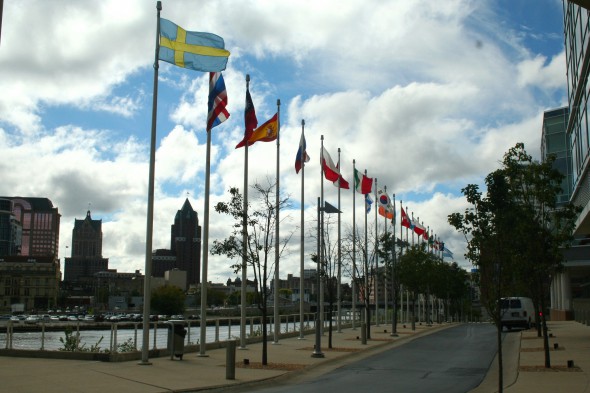 The conference took place at the world headquarters of Manpower Group, which sponsored the event. Photo by Jabril Faraj.

A presentation by Katherine Wilson, executive director of the Zeidler Center for Public Discussion, highlighted the need for action when it comes to creating employment opportunities. Wisconsin’s 12.7 percent incarceration rate for black men is almost twice the national average. The War on Drugs, which disproportionately targets African-American populations, contributes to the high rate.

African-Americans, who make up 6.2 percent of Wisconsin’s population, account for 51 percent of prison admissions. A 2008 Human Rights Watch report shows black males were incarcerated for drug offenses at a rate 46 times higher than their white peers in 2003. It also was the highest rate in the country and nearly double that of Illinois, which came in second. Milwaukee, home to the largest number of African-Americans in the state, also has the largest employment gap between blacks and whites in the nation for both men (32.4 percentage points) and women (20.6 percentage points).

Invoking Michelle Alexander’s The New Jim Crow, Wilson said, “Once put in the felony category, due to often non-violent drug possession, these men enter what some have called ‘a permanent caste system,’ a lower caste, and must endure ongoing discrimination in terms of employment and housing.”

He said it’s necessary to address incarceration and poverty for everybody but added that focusing on the most vulnerable population will make it easier to move the needle on those issues. “We need to work both ends against the middle.”

Pro Trade, which is associated with Pro Painter, a local painting company also owned by Washington, graduates 20 to 40 individuals, many of them “returning citizens,” every four months. The 12-week program has a 90 percent retention rate, according to Washington, and trains enrollees in personal development, rough carpentry, finish carpentry and painting, and concrete work. Participants aren’t allowed to miss more than two days throughout the program.

Washington is no stranger to adversity. Born and raised in Milwaukee by a single mother, Washington got involved with drugs, dropped out of high school at 17 and ended up in prison shortly after he turned 18. After being released, he worked low-wage jobs at Lena’s and Masterlock before purchasing his first two houses and becoming a real estate agent. Washington started a roofing business before founding Pro Painter in 2011.

The Pro Trade program began in 2012 as a result of Washington’s grappling with how he could help combat post-recession unemployment in Milwaukee. “The only thought that came to my mind is ‘I don’t have enough money to give to the problem but I can grow the capacity of my company in order to give a few individuals an opportunity for employment,’” he said.

Washington hired 13 people who graduated from the first group of trainees and was able to maintain a 40 percent profit margin. The next year, that margin grew to 60 percent. Washington emphasized that it’s not just about the profit; it’s important to invest in people.

“People are your greatest assets,” he said. “Not the tools, not the machines, not the trucks, not the branded shirts — it’s the people.”

And, the program’s success can, at least in part, be attributed to Washington’s personal investment in the process. “I was once there,” he said. “I’m a product of my own program. Everything that we teach our students is what I’ve done.”

Mike Sorge, a superintendent and construction executive at Mortenson Construction, one of 25 employers represented at the event, said he hadn’t previously been familiar with Pro Trade but came to get more information and “understand more about this program and what we can do to help.”

Sorge said Mortenson is “always looking for good, quality people” who are willing to learn. “People need a chance and they need support to become successful,” he said. “You’ve got to give them the opportunity … but they have to have the willingness and the desire.”

Wesley, who previously worked in higher education, said employers often don’t give ex-offenders “the same type of regular leeway that a person without [a conviction] would get,” even though companies will often encounter absenteeism due to family issues or car trouble, no matter the employee. “You couldn’t work for us without a degree, we didn’t hire felons and [we] still dealt with issues,” he said. “And I’m sure every employer does.”

“We want to just, kind of, reframe the narrative and get the employers to understand that they’re people too,” Wesley said, referring to ex-offenders. “They had a problem, they messed up … but when there’s one issue that happens, don’t treat it like it’s because this person is a felon.”

In the end, Washington stressed the role of employers and the importance of “becoming bigger than profits.”

For people who need a job and have the odds stacked against them, that opportunity is something they’ll remember forever, said Johnson. “You never forget the days that change your life.”

The second leg of the conference, including a Zeidler Center dialogue between employers and returning citizens, will take place Oct. 9 at Pro Trade’s training facility, 3227 N. 31st St.