Wisconsin Has Fewer Employees Than Most States

State has 7.4% less state workers than national average and payroll lower than 40 states.

By Tamarine Cornelius, Wisconsin Budget Project - Oct 7th, 2015 10:55 am
Get a daily rundown of the top stories on Urban Milwaukee 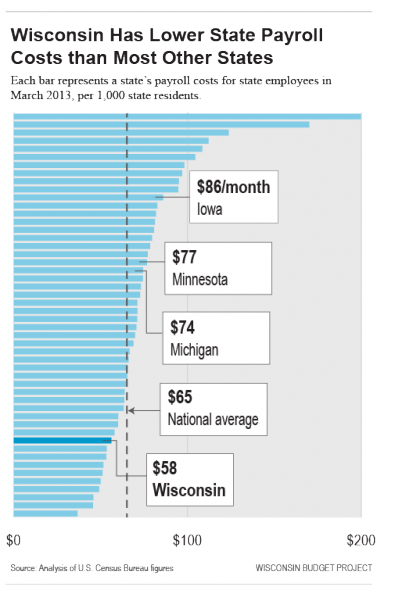 Wisconsin Has Lower State Payroll Costs than Most Other States

Governor Walker’s proposal to overhaul the state’s civil service system for state employees has been in the news recently, but missing from the conversation is the fact that Wisconsin has significantly fewer state employees and smaller payrolls than most states. If one of the goals of making changes to Wisconsin’s civil service system is to ensure that Wisconsin’s state government runs efficiently, advocates for the changes should know that Wisconsin already has a lean state government with relatively low costs.

The proposed changes to the state’s civil service system would loosen hiring and firing requirements for state employees, lengthen the probation period for new state employees, and eliminate bumping rights for more senior employees. The Milwaukee Journal Sentinel describes some of the changes:

“The changes include dropping the exams that job candidates for state government are often required to take in favor of a résumé system and better defining the “just cause” definition of fireable offense such as stealing from the state or showing up to work drunk. The proposal would also centralize human resources work in the state Department of Administration, an agency that is controlled more closely by the governor and his appointees than some other independent state agencies.”

Advocates for the changes say the proposal will make the state’s human resources system operate more efficiently, while critics say that weakening civil service protections for state workers will result in workers getting hired and promoted on the basis of their political connections, rather than their qualifications.

What hasn’t come up much in the discussion around changes to civil service system is that Wisconsin has relatively few state employees given the size of our population. In fact, only ten states have leaner state governments than Wisconsin.

Wisconsin had 12.6 state employee full-time equivalents (FTEs) per 1,000 state residents in 2013, according to an analysis of figures from the U.S. Census Bureau. That’s 7.4% below the national average of 13.6 FTEs per 1,000 residents. Put another way, for every 100 state employees in other states, Wisconsin only has only 93.

Streamlining Wisconsin’s human resources system is a laudable goal, but weakening civil service protections could actually make state government less efficient by increasing the number of state employees subject to political pressure. And proponents of the change should remember that with relatively few state employees and low costs, Wisconsin state government already runs more efficiently than many other states.

2 thoughts on “Wisconsin Has Fewer Employees Than Most States”