The Return of Gloria’s Bakery

By Marlita Annette Bevenue, Milwaukee Neighborhood News Service - Oct 2nd, 2015 10:44 am
Get a daily rundown of the top stories on Urban Milwaukee 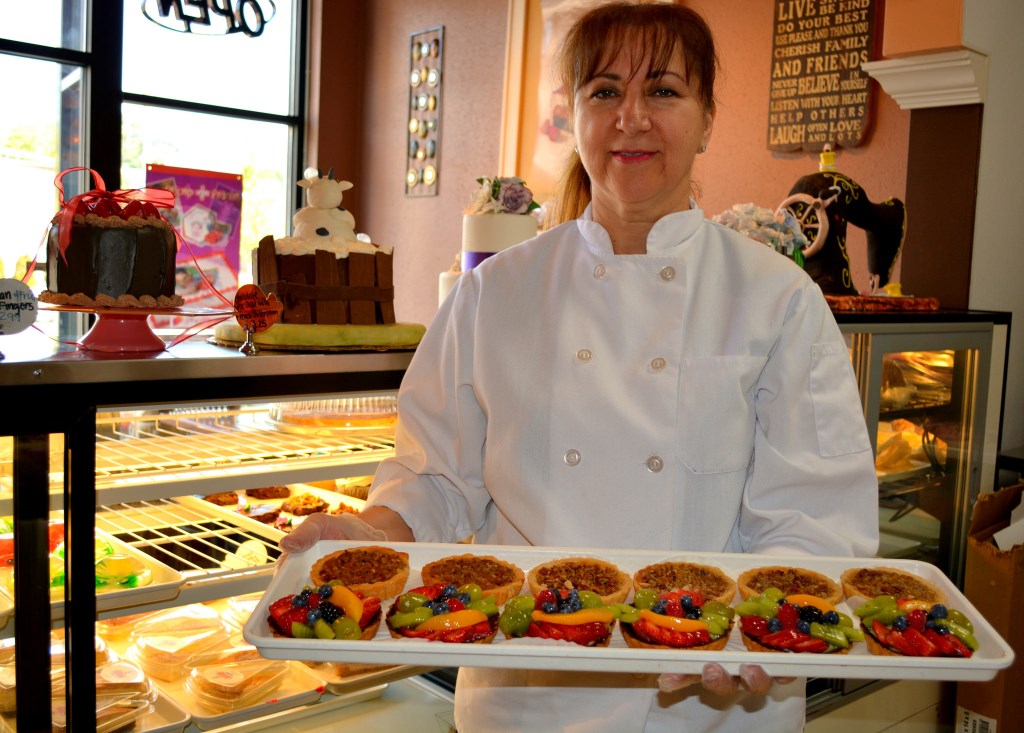 A quinceañera cake for a friend kicked off Gloria De Angelo’s baking business 22 years ago. Today, De Angelo is a respected entrepreneur and culinary craftsman who is helping students enter the field she loves.

In December, De Angelo relaunched Gloria’s Cake Shop & Café on S. 26th Street and W. National Avenue 16 years after closing down her first South Side shop, which was robbed and vandalized several times.

De Angelo has come a long way since the days she sold cakes and pastries out of her basement. She has a new recipe for success at the shop she opened in the heart of the South Side. “This time around I wanted to give back to my community, create jobs and help people in the same way that this community has supported me over the years,” she said.

Since De Angelo opened her new shop she has partnered with MATC’s Culinary Arts Program, giving students the opportunity to complete internships at the bakery. “Current students come here and they bake, decorate cakes, fulfill cake orders and gain real-world experience working in a store dealing with customers,” said De Angelo. She was so impressed with one of the interns that she recently hired the student to work in the shop full time.

De Angelo also tries to support other small businesses. For example, La Flor de Trigo Bakery, a family-owned bakery on 13th Street and Lincoln Avenue, is a vendor. “I sell their cookies and other pastries from my shop, which gives them an opportunity to reach more people.” 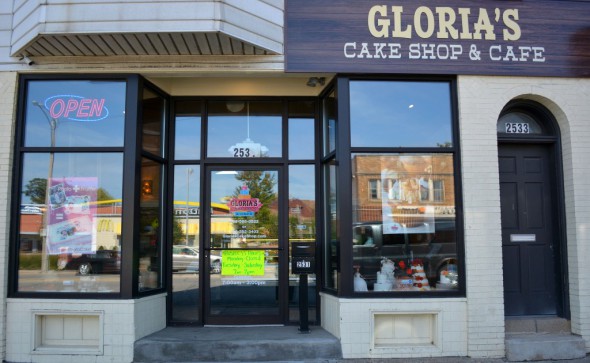 Gloria’s Cake Shop & Café opened at 26th and National in December. Photo by Marlita A. Bevenue.

Yolanda Fernandez, who lives near the bakery, said she’s happy to see De Angelo back in business. “I have been one of Gloria’s customers for about 10 years. I can’t count how many cakes I’ve bought from her. She has the best cakes, the best coffee and she’s a classy lady.”

Running a business hasn’t been without its obstacles.

“It’s been a bittersweet journey,” De Angelo admitted. “But I didn’t do this alone. I’ve relied on my education, and the support from my loyal customers over the years.”

De Angelo was born in Milwaukee, but spent her childhood years in Mexico with her parents and other relatives. Her family opened a seafood restaurant near their home in Puebla, where De Angelo watched her mother cook, bake and socialize with restaurant patrons.

De Angelo didn’t know it then, but she would be following in her mother’s footsteps decades later, opening her own cake shop and café in her hometown.

After spending many years in Mexico, tragedy struck De Angelo and her family. “My mother passed away from cancer, and my 10-month-old daughter died due to complications from the measles,” she said. “I thought to myself, am I going to stay here and feel sorry for myself, or am I going to live my dream?”

Despite the devastating loss, she remarried, gave birth to another baby girl and moved back to Milwaukee motivated to find peace and happiness through her passion for cooking.

She enrolled in the culinary arts program at MATC in downtown Milwaukee. After completing her course work in 1993, De Angelo took a job waitressing at a local restaurant on the South Side. Soon after, a friend asked her to bake a cake for a quinceañera celebration, sparking the idea to go into business for herself.

De Angelo began selling her special occasion cakes about four times a week out of El Rey Food Mart on Cesar E. Chavez Drive. Eventually, the cake and pastry orders increased and De Angelo decided it was time to open her own shop.

In 1997, De Angelo opened Gloria’s Cakes on 5th Street and Lincoln Avenue. Business was booming, but the shop’s success was short-lived.

One morning, she was opening up the bakery when a man followed her into the store and robbed her at gunpoint. Her young daughter witnessed the robbery. No one was hurt, but the next day she shut down Gloria’s Cakes permanently after two years in business.

Upset and disappointed, she transitioned from the kitchen to the classroom. She went back to MATC as a culinary arts instructor teaching the classes in baking basics and cake decorating in the same program she graduated from years earlier.

When she wasn’t teaching, she was baking. “I love the whole process from start to finish. The smell, the taste, the colors. I love making something beautiful, something flavorful. I could keep doing this forever,” De Angelo said.

She once again went into business for herself selling cakes, pies and pastries to stores including Pete’s Fruit Market, El Campesino Grocery in El Rey Plaza and Maxim’s Family Restaurant in Brookfield. But something was missing. De Angelo spent much of her time in the kitchen, rather than interacting with her customers. She missed those personal connections, which prompted her to open the new bakery.

According to Ald. Bob Donovan, De Angelo’s business is building up the community. “She faced a lot of challenges when she chose this building and this type of business, but she believed in herself and worked hard to make her dream a reality,” Donovan said. “She is an inspiration for all future entrepreneurs, and I believe that the success of her bakery will encourage others to take the brave steps needed to open their own business.”

Gloria De Angelo’s story proves hard work and dedication pay off. “Some days are busy, some days are slow. Sometimes I’m proud of what I’ve accomplished, sometimes I want to cry,” she said. “I could have given up, but the baking business is in my blood.”

One thought on “The Return of Gloria’s Bakery”