If lawmakers don't act, 158,00 Wisconsin families and 301,000 children could lose their tax credits.

By Tamarine Cornelius, Wisconsin Budget Project - Sep 29th, 2015 01:51 pm
Get a daily rundown of the top stories on Urban Milwaukee

Western front of the U.S. Capitol.

Unless Congress acts to save key provisions of two working family tax credits, Wisconsin’s working families may pay more in taxes and have a harder time making ends meet. Congress has a window of opportunity this fall to make the improvements to these credits permanent, which will help Wisconsin working families climb the economic ladder and achieve stability.

More than 150,000 Wisconsin families and 301,000 Wisconsin children will be harmed if federal policymakers fail to save key provisions of the Earned Income Tax Credit (EITC) and the Child Tax Credit (CTC) that are set to expire at the end of 2017. These families will lose an average of $1,100 per year  they could use to make investments that help them keep working and improve the economic security of their family, such as paying for car repairs or saving for their children’s college educations.

Together, the federal EITC and the CTC lift more than 100,000 people in Wisconsin out of poverty in a typical year, including about 50,000 children. Both credits are only available to people who work, and mostly benefit parents who work at low-paying jobs. The EITC and CTC also have long-term benefits for children in families that receive the credits, which can help break the cycle of poverty.

The Earned Income Tax Credit (EITC) encourages and rewards the work of low and moderate income people as well as offsets federal payroll and income taxes. The amount of EITC depends on a recipient’s income, marital status, and number of children. During the 2013 tax year, the most recent year for which data is available, the average EITC was $3,074 for a family with children (boosting wages by about $256 a month), compared with just $281 for a family without children. Wisconsin, like 25 other states and the District of Columbia, also has a state EITC. Wisconsin’s EITC is calculated as a percentage of the federal EITC, although childless workers are not eligible for the Wisconsin EITC.

The federal Child Tax Credit (CTC) offers a tax credit of up to $1,000 per child. For low income workers, the CTC is phased in at 15 cents on the dollar of income earned above a $3,000 threshold.

The EITC and the CTC support families, help children do better in school, and strengthen the future workforce, according to a growing body of research.1 These working family tax credits:

What’s at Stake for Wisconsin Families 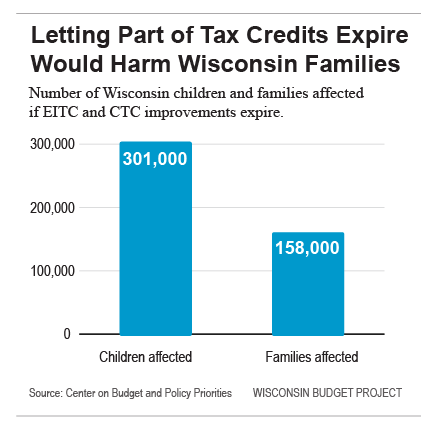 If Congress does not act, key provisions of both the EITC and the CTC will expire at the end of 2017. Some Wisconsin parents who work at low-wage jobs will lose the entirety of these tax credits that are helping them lift their families out of poverty, and some other families will receive smaller credits than they would otherwise.

Here is what’s at stake if Congress does not save the EITC and CTC improvements: