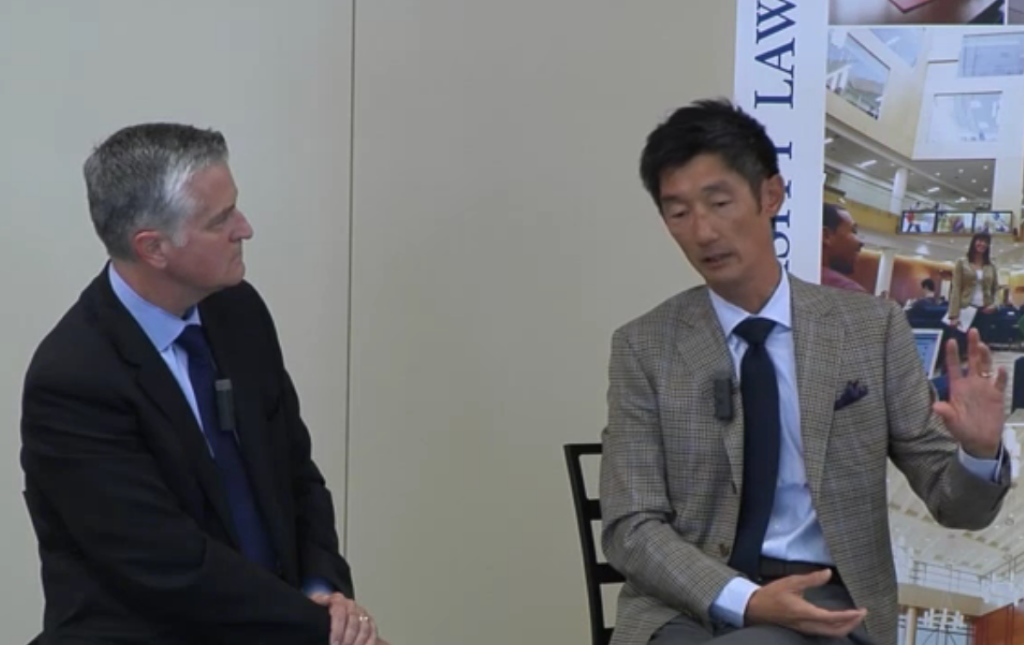 Milwaukee’s visionary former mayor John O. Norquist put into place the modern zoning code that has governed the city’s development in the 21st century. Norquist overturned the 1950s zoning that was based on the automobile and suburban design precepts in favor of a walkable community concept. From 1995 to 2003 his planning director, in charge of developing the new code, was Peter J. Park, who also served as an adjunct professor at the UW-Milwaukee School of Architecture and Urban Planning during his tenure.

“Norquist would spend his political capital” on his “new urbanism” concepts, Park said, and that was fine with him. “It made things a lot easier for me.” In many other cities the political leaders were not so easily sold on the merits of overturning the automobile age.

Park made his remarks yesterday as a guest of the Marquette University Law School where he appeared for an interview with Mike Gousha and his “On the Issues” series. The discussion was taped before a capacity audience of nearly 200 people in Eckstein Hall. After his tour of duty here, Park went on to a similar job with the City and County of Denver, where he served for seven years until 2011. Since that time he has been a visiting instructor at Harvard University, the University of Colorado and elsewhere. He also has his own design practice and lectures widely, including in Lisbon, Portugal just this week.

Is the so-called “urban renaissance” for real? Gousha asked.

Park answered in the affirmative. He recently worked in Austin, Texas to give that university and capital city its first ever comprehensive development plan. He did the same in Houston, which Park said is “a city that’s very famous for not having a zoning code. But they have plenty of regulations.” Park has also worked in Los Angeles and of course, Denver. What they all have in common is an interest in increasing downtown development and population.

Not all of them are cities with “good bones, gravitas, character, history,” Park noted, something he said a city like Milwaukee has in abundance, which gives us somewhat of an advantage along with our grid system and walkable scale. But even small towns with “the original Main Street — these are places that people want to respond to,” Park noted.

He has developed a sixth sense about development proposals, he said: “when you see a rendering of a shining building,” as developers are fond of producing, “if you don’t see people in the picture, there’s a problem.”

Park cited the postwar era as the nadir of urban design. The first zoning codes, pioneered by the City of Milwaukee in 1920, and upheld by the state Supreme Court in 1923, were based on public health. The idea was to separate industrial and hazardous uses from residential, commercial and recreational uses. But cities continued to grow and on a human scale, even as they grew along transit lines. “When you got off the train you were still in a walkable area. You could live and work on Main Street,” he said.

After the war, however, cities redid their zoning, making things more suburban, and favoring the automobile, with the idea that “the further apart buildings would be the better we would be,” he said.

So the city modified that. “When we revised the zoning code of Milwaukee, it was to remove barriers to urbanism,” he said. For example, the zoning code allowed developer Julilly Kohler to develop her Passeggio project on a vacant lot on Brady Street in 1996 with no setback from the sidewalk, and with apartments located above street level retail. Today there are dozens of projects throughout the city that have incorporated the new zoning to create a dense, walkable city, and more are on the way.

Park announced, to no one’s surprise, that the automobile as a means of transportation is here to stay. But over the years, with the postwar zoning codes, “we have prioritized one mode of transit. Great buildings were destroyed for surface parking lots,” he said. The feeling then was “this is great for the city.” In fact, it had a destructive impact.

“There is no great city in the world that has the automobile as the design focus,” he said.  “There is no city where all the retail is drive-through. … I have never seen any neighborhood in any city get better when a freeway is cut through it,” he said. Yet among freeway and automobile proponents, he noted “there’s a fear that removing this cancer [the freeway] will somehow” lower our quality of living.

But with so many gaps in the urban fabric to be filled, Park cautioned against what he called “the replication of historic forms. It’s hard to do it right. You can always tell,” he said, when a phony old building is slipped in among the genuine articles.

Park is a critic of urban freeways and was involved in the demolition of the Park East Freeway and in the plans for its redevelopment, which is only now underway. He regrets that we were unable to redo Interstate 794 and turn it into a boulevard, as Norquist had recommended. “We had a chance. I saw an opportunity, there was so much land,” he added wistfully.

But the surge of urbanism is likely continue unabated, he suggested. “The role of the car has changed considerably” with Uber, Lyft, Zipcars and other changes. Young professionals have voted with their feet quite literally in favor of walkable cities. And this bodes well for redevelopment and good urban design, since “the speed of walking is where building details become recognizable,” he said.  And it is not just the millennials that are embracing urbanism. “Whole populations of children and adults who don’t drive are moving to the city.”

Park also spoke about the proposed Bucks arena in broad terms. “The arena development should focus on human scale,” he said. Speaking of the former Park East Freeway site where the new facility is to be located, Park said he was not surprised that it took over a decade for it to be redeveloped, nor that an arena would be in the place. “I said when the freeway was torn down that we did contemplate and entertainment district there.” Park recounted that the land was to be used for the Harley-Davidson museum, and that was one thing that induced then-Governor Tommy Thompson to go along with the demolition.

“But I was expecting the County-owned land to be the last to go,” he said. It was the adjacent, private land that indeed developed first, including along the river, on N. Commerce St., N. Martin Luther King Drive, and to the west at the site of the former Pabst Brewery. “There would have been not much interest in the Pabst if the freeway was still there,” he said.

Speaking in aggregate of the accomplishments of his years in planning, and of the work that has been done here since, Park was philosophical: “We had the crazy idea of building a public market, and the riverwalk,” and other improvements. “The 20-year plan in Milwaukee was mostly done in 10 years.”

Moderator Gousha joked during the program that “you don’t go to a cocktail party and say ‘let’s talk zoning,'” to which Park replied, “It depends on where you are.” The same might be said about drawing a capacity crowd to a talk about zoning, but that is exactly what turned out for the afternoon’s event. The fourth floor meeting room at the law school building drew about 200 citizens, some with ties to Marquette University, like Steve Filmanowicz, who had served as Norquist’s press secretary during the Park era, and Dr. Curtis Carter, a Marquette professor of aesthetics who is planning a conference on planning and public art to be held at Marquette next year. Many others were from the community, including Willie Hines, the former Common Council President who is now deputy head of the city’s Housing Authority, retired MSO musician Richard Kimball, Joan Urdan, a civic leader who has moved downtown from the suburbs (as have all of her friends, she said), Hannah Dugan, who is running for judge while working for an MBA at Marquette (she’s a UW Law alum), former police union official Bill Ward, who sure gets around a lot, Ian Abston, of Newaukee, and Urban Milwaukee architecture critic Tom Bamberger. 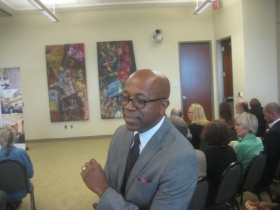 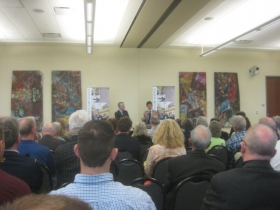 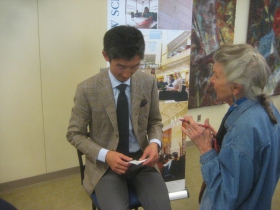 One thought on “Plenty of Horne: The Return of Peter Park”