Press conference with Abele celebrates award of 10 acres of county land for $1 and big dreams. 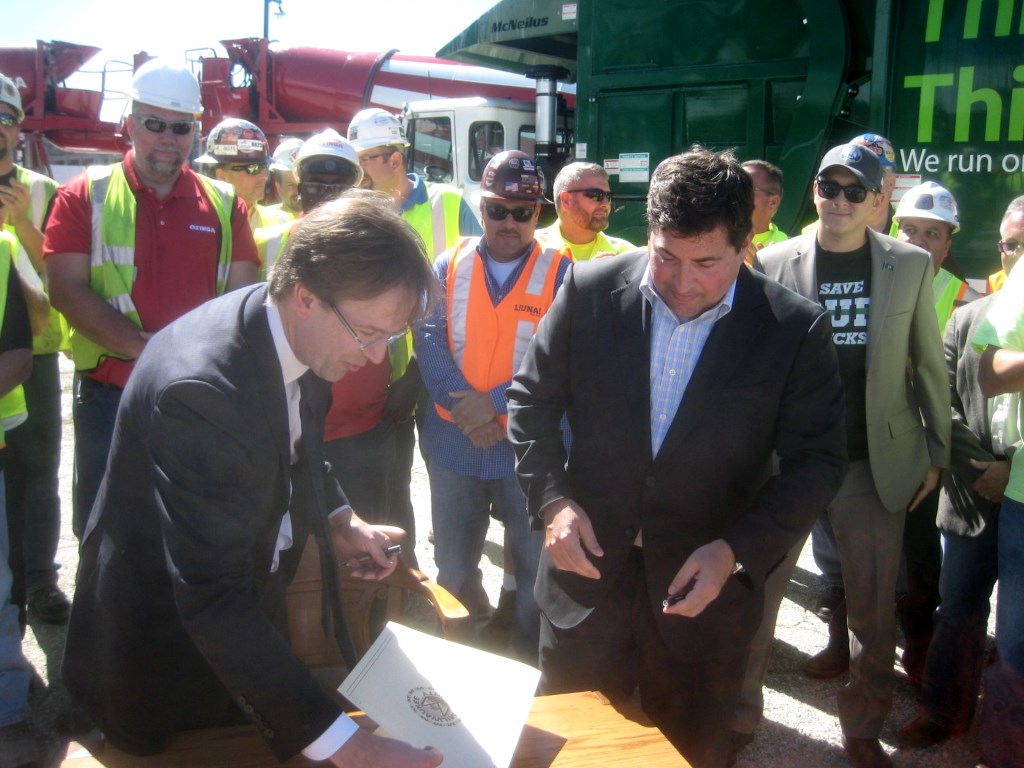 Today was a big day for the Milwaukee Bucks.

Milwaukee County Executive Chris Abele and Milwaukee Bucks President Peter Feigin put their signatures on a $1 contract giving the Bucks owners an option to buy Blocks 1, 2, 4, and 7 of the Park East redevelopment site. The contract was actually signed by Head of the Herd, LLC., the development company owned by the Bucks owners, for development of practice facility for the team along with “ancilary” development in the vacated freeway corridor on the north end of downtown.

The ceremony was held this afternoon at Block 7, near the former site of the Sydney Hih building, just across from the Moderne, the luxury high-rise where Abele resides. The block will be part of the anciliary development for the $500-million arena.

“I’m beyond pumped,” Feigin told the 200 or so attendees, many of them union workers in their hardhatted, neon-vested regalia. Feigin said the first phase of the development, which will take part on the north and western portions of the nearly 10-acre site, will be the Bucks practice facility, which is scheduled to begin construction by the end of the year, and is projected to be a 50,000 to 60,000 square foot building with a price tag of $25 to $30 million.

In response to a question from Urban Milwaukee, Feigin said work had just begun on executing a lease for the arena, which he says is under way with the State of Wisconsin Department of Administration. This lease will be critical to other approvals of the project, including those of the City of Milwaukee.

Feigin also responded to a question asking if any new renderings were available for the facility beyond the two that were unveiled in a March press conference.

Feigin said the next graphics of the facility would be beyond the rendering stage and would be full schematics. These will “come out in the next few weeks,” he said. These will be shown to the owners for their approval and then shared “instantaneously” with other stakeholders.

These renderings will likewise be crucial to other approvals of the project, and are eagerly awaited by city planning officials and Ald. Bob Bauman, who represents the district and has been critical of the lack of solid information he says the city needs from the team to approve construction.

The event took place on a deserted lot that had had a freeway above it for four decades, and one that has stood mostly fallow for the last decade or so since the freeway has been removed. Among the rubble can be seen manholes and other subterranean construction that is in disrepair and must be moved for the construction. Also hidden within the realm of Hades are the buried supports that held the elevated freeway aloft, along with unknown debris that has been deposited on the site over the past 170 years.

Still, the land has been valued at $8.8 million, as a press release by the Abele administration noted. But this “does not account for the cost of sewer removal and replacement ($5.2 million) or the cost of removing abandoned highway foundations left in the ground ($3.1 million),” the release noted. The Bucks owners will also bear “all risk related to other unknown property costs, including environmental remediation costs, which could be significant.” These costs explain why the county sold the property for the token sum of $1, the press release said.

But the release left out the fact that the city is on the hook for undetermined costs, as noted by a city comptroller’s report, “Coordination between Bucks, Milwaukee County, the State of Wisconsin, MMSD, and the City of Milwaukee to remove footings in the Park East Land and to relocate a sewer in the Park East Land to Juneau Avenue – A Cost estimate cannot be determined at this time.” But at a celebratory event like this, no one was computing the exact amount this would leave the Bucks to pay for remediation of the land.

As the crowd gathered for the 2 p.m. event on a sunny afternoon, Feigin and Abele arrived while television camera crews, media, and other interested parties stood in the vacant lot. Two concrete trucks and a giant semi-trailer owned by the Teamster’s union provided the limited backdrop for the event.

“Part the rivers!” Feigin exclaimed at the approach of Bruce Block, the prominent real estate attorney who is the go-to guy for deals like this. Bucks coach Jason Kidd, dressed as if ready to head to the practice facility that very moment, congratulated Abele, saying “it takes a team,” to make big projects happen.

“It’s a beautiful day. You couldn’t ask for a better one. Stopped the rain for you, Peter!” Kidd enthused to his boss.

With the participants assembled, including spectator Tim Sheehy, whose Metropolitan Milwaukee Association of Commerce was the arena’s designated cheerleader, Jim Tarantino, the county’s economic development director, pointed to the nearby area where “Kareem Abdul Jabar played his first professional game and Dr. J [Julius Irving] his last.” Tarantino also quoted Cezanne and Van Gogh in his remarks, adding a bit of tone to the proceedings. [The artists’ theme dealt with “the blank canvas,” and the analogies flew readily from there.]

Tarantino yielded the podium to Abele who said he had waited a long time for the event, which he called “an unambiguous win” for the community. This isn’t a study report, or a white paper, he said of the signing ceremony, “this is creating thousands of jobs now. Right now.” Abele said he ran on a program of creating jobs, and now look what we’re getting. “Thousands of jobs now. Right now,” he repeated.

Dan Bukiewicz of the Milwaukee Building & Construction Trades Council said “there is a different wind in this city for development,” citing the NML headquarters and the 833 building now under way as examples. His workers also gave us the Bradley Center, which the arena is to replace, Miller Park, and the old County Stadium and practically every other large project in the city, he said. He linked his union workers to “a championship team,” and said they build family sustaining careers in addition to landmarks.

He was followed by Ken Kraemer, the Construction Labor Management Council and Building Advantage Executive Director. Kraemer said construction employment is expected to reach 15 million man hours in 2016. He thanked Abele “for getting the deal done,” the Bucks organization “for making a difference” and former Bucks owner Sen. Herb Kohl “for having the foresight to pick the right group” to buy his team, leading us to where we are today.

So, to recap, we are now one dollar into the deal. If we can replicate this accomplishment five hundred million times, we will have a new arena. The longest journey begins with but a single step.

Photos From The Ceremony 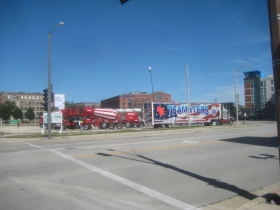 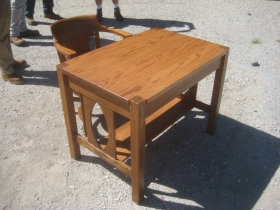 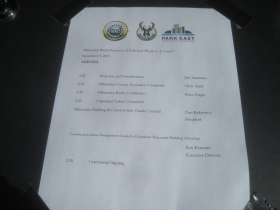 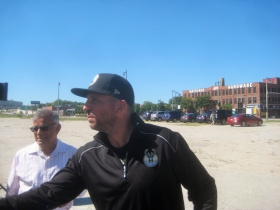 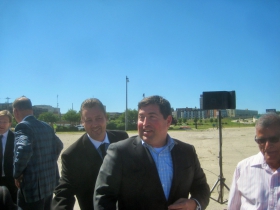 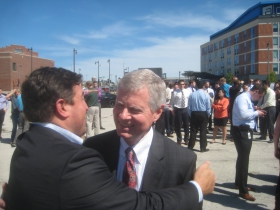