By Edgar Mendez, Milwaukee Neighborhood News Service - Sep 1st, 2015 10:14 am
Get a daily rundown of the top stories on Urban Milwaukee 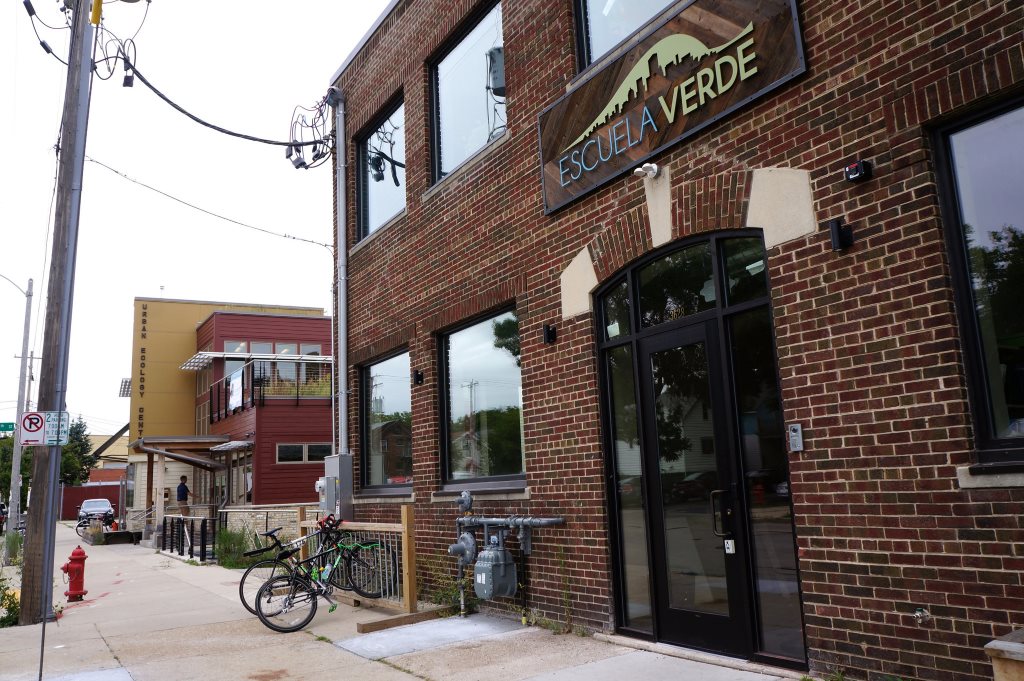 The new Escuela Verde location is next to the Menomonee Valley Urban Ecology Center, with the Valley Passage between them. Photo by Adam Carr.

Last year, Isabel Castro, a junior at Escuela Verde, said she took a “leap of faith” when she decided to enroll at the school, a charter authorized by the University of Wisconsin-Milwaukee that serves 7th -12th graders.

She knew it was different than a typical school, but thought it might be just what she needed.

“I ended up learning so much about myself; the environment there was liberating,” Castro said.

Escuela Verde has advisors rather than teachers and principals, workshops instead of classes and open spaces rather than classrooms.

According to Joey Zocher, one of a handful of advisors at the school, the new building houses a recording studio, a zen room for yoga and a bat cave where students conduct science experiments. Many of the materials found in the new building are recycled or repurposed, and much of the space was designed by students.

The school will be hosting a grand opening ceremony from 4:30-6 p.m. on Sept. 10, which will be open to the public and feature student-led tours, a bake sale, music and other activities. The school is currently at capacity with 100 students, but spaces may open up, according to Zocher.

“The school and the unique structure are not for everyone,” Zocher said.

The fit was right for freshman Sydney Issa, who had struggled at a traditional school in Elmbrook before transferring to Escuela Verde last year, according to her mother, Kai Simone.

“She was above average in literacy but falling way behind in math,” Simone said.

As a result, her self-esteem and self-confidence suffered, according to her mother.

Since transferring, she’s shot up two grade levels in math and is excelling in other areas as well, Simone said.

She credits her daughter’s quick turnaround to the project-based approach to learning, which is in line with the way she learns techniques as a performance arts enthusiast.

“She’s learning how to become a leader,” Simone said.

Students at Escuela Verde are encouraged to take on leadership roles both in and out of the classroom, said Zocher.

Castro has participated in community brainstorming sessions for the rebuilding of nearby Arlington Heights Park, and entered an essay contest in which she and another student wrote about how to improve relations between citizens and police.

Her favorite class is a workshop on youth activism.

“I love being at this school,” Castro said. It’s a second home for me.”