Present Music dares to present Mozart! Yet it's still a very modern concert.

Gathering these forces is worth the effort. The music may be rooted in minimalist serial styles much like that of Philip Glass and others, but the energy bursts out into an organized chaos that is clearly Adams at his exuberant best.

In the opening movement, I hear a rapidly moving stream – repeating patterns in the two pianos augmented by bright interjections from various wind instruments. The intensity and volume slowly increase, capped by three women’s voices offering wordless harmony. Adam’s shares a more explicit vision – “while driving down Interstate Route 5, I was approached from behind by two long, gleaming, black stretch limousines. As the vehicles drew up beside me they transformed into the world’s longest Steinway pianos…twenty, maybe even thirty feet long. Screaming down the highway at 90 m.p.h., they gave off volleys of Bb and Eb major arpeggios.”

In a brief slow movement – I hear a broad, slow section of the stream. Then what has become a river flows through a more urban district. The minimalist, repeating patterns are broken by melodies introduced by one or both pianos. Again, Adam’s imagery is more over the top – “I was reminded of walking down the hallways of the San Francisco Conservatory, where I used to teach, hearing the sonic blur of twenty or more pianos playing Chopin, the Emporer Concerto, Hanon, Rachmaninoff, the Maple Leaf Rag and much more.”

In the spectrum of 20th century serial music, Adam’s has clearly offered more energy, variation and excitement – to the extent that other fans of minimal music did not receive this composition well. No matter. The result is certain to be well received in Milwaukee. 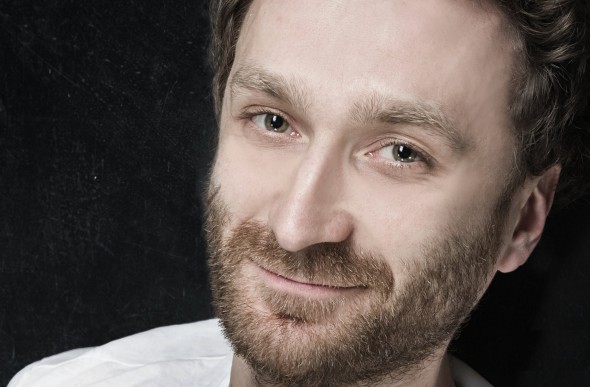 Now, what to do next with two grand pianos on the stage? Present Music ensemble pianist Cory Smythe and frequent guest pianist Yegor Shevtsov will perform a virtuosic, exuberant Adams piano duo — Hallelujah Junction. The two pianos share a bright rhythmic melody, but at a slightly offset pace. The delayed repetitions ricochet between the two pianos. The resulting feast for the ears must be an enormous challenge for the pianists,  who must avoid coordination as they focus on their independent parts.

In the 1984 film, Amadeus, Antonio Salieri hears a work by Mozart for the first time – the passionate third movement of the Gran Partita. “This was a music I had never heard. Filled with such longing, such unfulfillable longing. It seemed to me that I was hearing the voice of God.” The Gran Partita may be more nuanced, but complements the energy of the Adam’s selections.

Having taken the step to program a substantial Mozart work, Stalheim titled the program Mozart?! to proclaim his right to broaden Present Music’s already eclectic though typically contemporary palette.

To round out the concert, Stalheim selected a work by a recently deceased composer known for his work bridging contemporary and early classical music. Luciano Berio has written very experimental deconstructed/constructed “collage” music, a series of “transcriptions” of classical standards and a series of 18 virtuosic pieces for individual instruments – the Sequenze – that blend contemporary and early styles. The Sequenze are well represented by Sequenza VIII – a work for solo violin. Ensemble member, Eric Segnitz will appear for this one work. Sequenza VIII echos the techniques of J.S. Bach partitas in a contemporary mood.