Why David Brooks Is Wrong on Minimum Wage

He opposes raising it but uses bad math and incomplete research.

New York Times columnist David Brooks is many liberals’ favorite conservative—and also one of the most frustrating. His recent column on the issue of raising the minimum wage, which many Democrats here favor but Republicans oppose, is a case in point.

The article contains many of the elements that make Brooks appealing. His choice of research reports on the minimum wage seems fair, not deliberately biased toward one side or the other. The online version of the column includes links to most of the studies, allowing readers to check whether they were fairly summarized.

Milwaukee readers would be well served if our local newspaper insisted on the same practices from its op-ed writers. Too often they are allowed their own set of facts, not just their own set of opinions.

The column also illustrates Brooks’ typical desire for balance. He notes that, “Once upon a time there was a near consensus among economists that raising the minimum wage was a bad idea,” but that more recent research has caused that consensus to fall apart. However, in quantifying the shift in consensus, Brooks turns to some odd math calculations.

He writes that “One survey of economists by the University of Chicago found that 59 percent believed that a rise to $9 an hour would make it ‘noticeably harder’ for poor people to find work. But a slight majority also thought the hike would be worthwhile for those now employed.” To his credit, Brooks links to the survey, which asked a panel of research university economists whether they agreed, disagreed, or had no opinion on two statements. The first statement read: “Raising the federal minimum wage to $9 per hour would make it noticeably harder for low-skilled workers to find employment.” The table below summarizes the responses. The survey reports the results two ways: the first gives the percentage that agreed (strongly and not), uncertain, disagreed (strongly or not), and with no opinion. The second (second table shown below) weights the responses by the degree of confidence the economists had in their response.

In coming up with his figure of 59 percent, presumably Brooks dropped those uncertain or with no opinion, and combined those who strongly agreed with those who agreed, and those who strongly disagreed with those who merely disagreed. While this method leads to a majority agreeing, it does not give 59 percent. Using either the raw or the weighted percentages gives 52 percent. With the second statement the discrepancy is even worse. The statement read, “The distortionary costs of raising the federal minimum wage to $9 per hour and indexing it to inflation are sufficiently small compared with the benefits to low-skilled workers who can find employment that this would be a desirable policy.” The next table shows a breakdown of the responses.

Brooks recognizes that the old consensus among economists on the minimum wage has broken down. What he misses is that a new consensus is forming: that the benefits of a moderate increase in the minimum wage outweigh the costs. His odd mathematics fits his congenital desire to find a middle ground.

Consistent with missing the extent of the consensus shift, he also undercounts the benefits of a minimum wage hike. He refers to a study by the Congressional Budget Office (He doesn’t offer a link to the study. It is here.): 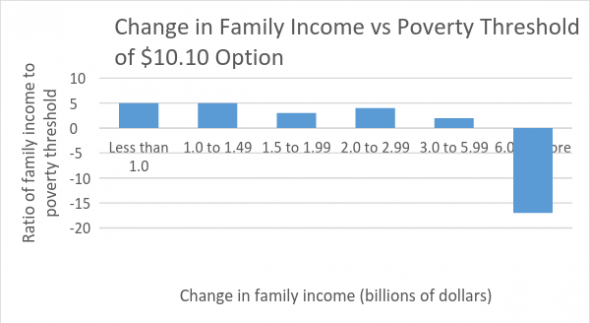 Change in Family Income vs Poverty
Threshold of $10.10 Option

In addition, Brooks totally ignores the benefit to families just above the poverty threshold who are struggling to get by. The chart to the right shows the CBO’s estimate of the net change in family income by their ratio to the poverty threshold of raising the minimum wage to $10.10. Note this is a net figure, after estimated job losses and price increases.

For those making more than six times the poverty threshold the price increases dominate. Below that income level, families on average enjoy a net benefit. In addition to lifting some people out of poverty, a moderate increase in the minimum wage helps strengthen the lower end of the middle class under the CBO estimate.

Consider a couple with two children. Both adults are working full-time earning the current the current minimum wage of $7.25. Family income is around $29,000 per year, putting them just above the poverty threshold. An increase to $10.10 would put them at just over $40,000, not rolling in money, but strengthening their hold on the middle class.

Amidst the screaming by both sides, Brooks often seems like a voice of moderation. A number of cities are raising their minimum wages, leading to a battle of anecdotes. When a franchise of Z Pizza announced it would be close because of Seattle’s increase in the minimum wage, the local Fox News jumped on the story as a sign that restaurants would be closing all over Seattle. Now the news that Wisconsin’s Ian’s Pizza would occupy the same space has led to a tone of triumph among supporters of the wage increase. In reality such anecdotes do not tell us much about the effects of raising the minimum wage. We need data.

Brooks’ virtue of looking for the middle position can turn into a vice. It contributes to a blindness both to the change of the economic consensus and to the reasons behind that change. While increasing the minimum wage is hardly a panacea for the problems of poverty and a weakening middle class, it pushes the nation in the right direction. What Brooks seems to miss is that splitting the difference between contrasting viewpoints doesn’t necessarily always lead to truth. In the case of his column on the minimum wage, it leads to mistaken conclusions.

19 thoughts on “Data Wonk: Why David Brooks Is Wrong on Minimum Wage”