Data shows they work better than MPS schools, but board adamantly opposes them.

This past week has not been a good one for the Milwaukee School Board. Up until now, it has successfully blocked proposals from the Milwaukee Public Schools administration to solicit proposals from charter schools to turn around some of Milwaukee’s lowest-performing public schools. But the state legislature is now poised to give two individuals the authority to solicit such turnaround proposals without seeking permission from the board: a commissioner appointed by the Milwaukee County Executive and the MPS superintendent herself. 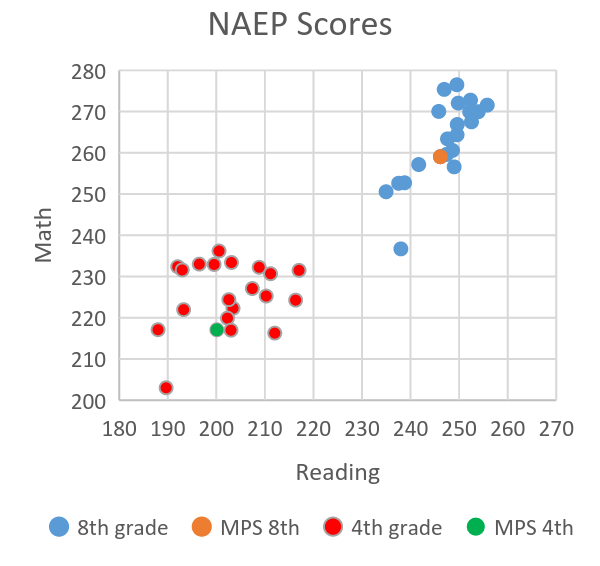 The need for a strategy for turning around low-performing schools in Milwaukee has long been evident. (I should note I previously served on the Milwaukee School Board.) The chart to the right shows the 4th and 8th grade average reading and math scores for a sample of low income students who attend one of the large school districts that participate in the National Assessment of Educational Progress’s Trial Urban District Assessment. The scores for Milwaukee Public Schools is shown in a different color, green for fourth grade and orange for 8th grade.

While MPS is not at the very bottom among its peers, it is clear that other districts with many of the same challenges are doing better. All the MPS scores fall well below those of the average urban district. Is it possible to change this?

Early last year, then-superintendent Gregory Thornton presented a plan that would have targeted 25 low-performing schools for various turnaround strategies. Thornton’s proposal was rejected by the board.

The board’s primary objection was that Thornton’s proposal envisioned soliciting proposals from operators of successful charter schools in Milwaukee and nationwide to operate some of the schools targeted because of their low performance.

The board’s opposition to charters has only hardened since. I recently served on MPS’ Charter Review Committee. The number of applications was down from previous years—only two–likely reflecting a growing view that MPS is not friendly to charter proposals. An extremely well-written proposal for a non-instrumentality school (a non-instrumentality is one that need not use union teachers) was unanimously recommended by the outside members of the review committee, but opposed by the two board members. When the committee’s recommendation went to the full board, it was rejected. A major objection was that the proposed school was likely to be too demanding of the inner-city students it targeted.

Thornton’s plan was rejected because it envisioned converting some of the schools to charter schools. Before looking at the reasons behind the hostility to charter schools, it is useful to review the evidence on their effectiveness. 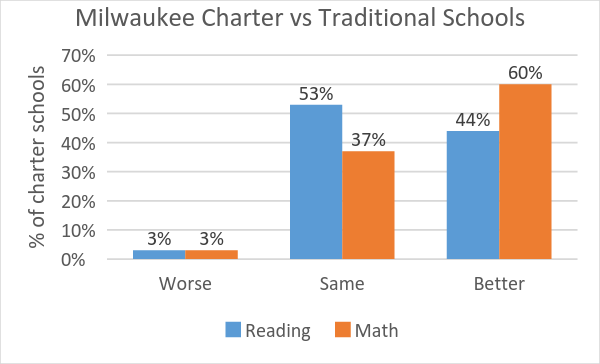 This was found by Stanford’s Center for Research on Education Outcomes (CREDO), which compared outcomes for charter school students in Milwaukee with those of similar students attending traditional public schools. As shown on the right, only one charter school (3 percent of the total) performed worse statistically than the average traditional public school, while the rest performed the same (53 percent for reading, 37 percent for math) or better (44 percent for reading, 60 percent for math). 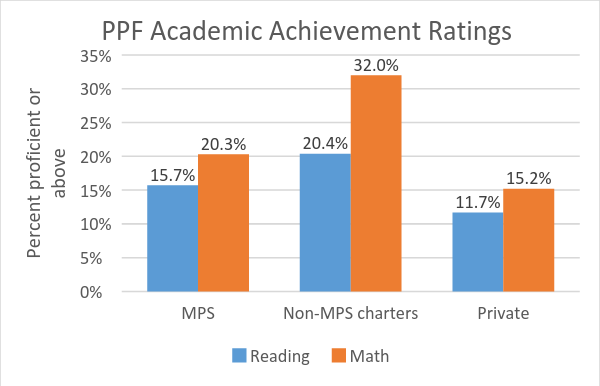 The difference also shows up in data published by the Wisconsin Department of Public Instruction. Using DPI data, a recent Public Policy Forum report calculated the percentage of students in MPS, non-MPS charters, and the school voucher program who scored proficient or above on the most recent state exams. The results are summarized in the chart to the right and show that non-MPS charter schools did by far the best of the three groups. It is no accident that a letter opposing the legislature’s opposed change in governance signed by the board president and MPS superintendent used the PPF comparison between MPS and voucher schools, but ignored the charter schools.

It is important to recognize that low-income students face many challenges in their lives that have little to do with schools. However, in Milwaukee, this recognition too often turns into resignation, that there is little the schools can do until all the other barriers faced by children growing up in poverty are removed. But the evidence suggests that schools can do a lot.

Why has opposition to charter schools grown on the Milwaukee school board? Part of the cause reflects economic interest. The Milwaukee Teachers Education Association (MTEA) drives the opposition. When enrollment shifts from traditional public schools to charter schools that hire their own teachers, MTEA membership suffers. As the only major player in recent school board elections, the MTEA enjoys considerable influence over the board.

A second factor driving the board’s opposition is Ideology. The right wing has no monopoly on ideologically based decision making. This shows up in an obsession with New Orleans where, following Katrina, charter schools have largely replaced traditional public schools. 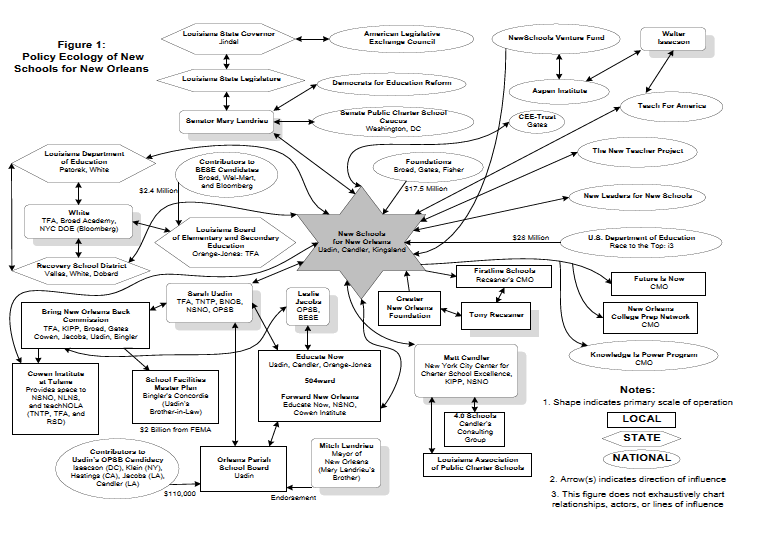 Earlier this year, the MTEA sponsored a conference on New Orleans, inviting three critics of that city’s transition to speak in Milwaukee. One was Kristin Burus, a faculty member at Georgia State University. The following diagram, taken from a Burus article, shows the “lines of influence” among the organizations and individuals in New Orleans. Except for the fact that it was published in a journal that describes itself as peer-reviewed, with minor modifications it might have appeared on a right-wing website, one, say, obsessed about the Common Core imposed by a “socialistic” Obama administration.

In addition to local groups, the arrows point to many of the major players involved with educational reform, including the Broad and Gates foundations, Teach for American, New Leaders for New Schools, The New Teacher Project, Democrats for School Reform, various charter school management organizations such as KIPP, and the Obama Administration including the Department of Education and its Race to the Top initiative.

Most of the groups and individuals in Burus’ web are pretty middle of the road, if anything more likely to appear in a Hillary Clinton administration than a Scott Walker administration (particularly if Walker continues his opposition to the Common Core). One genuinely conservative organization is included–the American Legislative Exchange Council, whose connection is through Governor Jindal. But Jindal is a relative newcomer; the New Orleans school redesign was largely done when Democrats still held power in Louisiana. In a more recent article in the Progressive, Burus credits the Heritage Foundation as the conspiracy mastermind.

When ideology—either right or left—dominates, making decisions based on evidence becomes much harder. Although there is no magic potion that will guarantee successful turn-arounds of low performing public schools, charter schools can be an important tool that can improve the performance of Milwaukee schools. Continuing on the present path makes that impossible.

For many reasons it would have been better if the board had been able to free itself sufficiently from ideology and the influence of the MTEA to let the administration move forward on plans to turn around low-achievement schools and to evaluate charter proposals on their merits. If nothing else, this would have demonstrated that Milwaukee could solve its own problems. The move by three board members to give the superintendent the freedom to act on her own authority was constructive but came too late to change the legislative process. It does appear, however, to have been incorporated in the legislation.

As a reason for rejecting Thornton’s proposal last year, board members referred to legislation circulating in Madison to remove failing schools from the control of the board, the ancestor of the measure now on its way to becoming law. Ironically, by confirming the perception that the board was unable to make the hard decisions needed to improve MPS, the board contributed to an outcome which could leave it cut out of some major decisions. Sometimes people contribute to the very result they most fear.